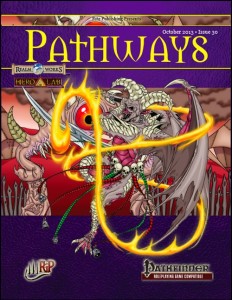 The latest installment of Rite Publishing’s Pay-what-you-want e-zine is 44 pages long, 1 page front cover, 11 pages of advertisement, 1 page ToC and 1 page SRD, leaving us with 30 pages of content, so let’s take a look, shall we?

David Paul mentions some supplements and muses on monsters in this issue kicking-off editorial before we are introduced to this issue’s template by Steven D. Russell, the CR +2 undead jesters may emit deadly cackles and send foes crushing to the ground, helplessly laughing. Rather nasty: They may throw cards on foes, with the effects duplicating the dreaded deck of many things – this creature should be used rarely and wisely, since the results from this deck can change the whole course of a campaign…not sure whether I like this template, to be sure. The sample creature, the court jester of Orcus is perhaps the coolest (and at CR 22, appropriate foe) possible implementation of such a template though. The illustration by Jacob Blackmon is awesome, though a bit pixelated for my tastes.

Next up, Liz Winters introduces us to the crew of Pathfinder wizards working with lone wolf to convert your favorite supplements. More on the crunchy-side would be Steven D. Russell’s expansion for  Restless Souls (from In the Company of Monsters), my favorite way of bringing dead characters back (I tend to heavily restrict resurrection etc.) get 17 new alternate racial traits – and they are AWESOME – came back wrong, for example, allows you to become more resilient versus maddening effects and several of the traits allow you to 1/week get a significant bonus (like a reroll) – nice!

Jacob Kellogg offers us an article on smart fighting, with two archetypes and 5 feats: Fighters may opt for the expertise experts Tactical Opportunists that improve the effectiveness of readied actions and AoOs and rogues may become Precision Strikers – who lose trapfinding and -sense in favor of a bonus to atk. Additionally, they may succeed at opposed int (or versus wis in the case of animals) checks to deny foes their dex-modifier. Honestly, not sold on either – the fighter archetype is promising with the bonus for readied action, but could have used more unique tools to play with. The base mechanic of the rogue archetype, based on opposing int-check, simply is clunky design – with 2 d20s and no skills or HD involved, this ability will never see use in my game due to not being based on capability, but rather luck – a significant discrepancy between rules-intention and execution. On the feat-side, first there would be Deadly Acumen, which allows you to take a -1 penalty to melee atk and cmb-checks for +2 to damage on melee rolls, halved when using natural or two-handed weapons. Rather ingeniously, this feat’s benefits are tied to a Knowledge-skill you have – for every 4 ranks in said skill, the benefits increase by -1/+2 conversely. It does not stack with power attack. See, that is great tying of mechanics – concise and effective: Awesome! Precision timing and the two build-up feats, which increase the effectiveness of readied actions are also awesome, as is the Systemic Maneuver Training-feat: It makes you NOT incur AoOs with ANY combat maneuvers. Let that sink in. Sounds op? Actually…it isn’t. Look up all the benefits the improved maneuver feats net – this does not provide any of them, it just “unlocks” combat maneuvers for the character. I’ll see whether this one works in play…

This issue’s interview is with John Four, master of RoleplayingTips.com, who offers online courses for DMs to make their combats faster and more efficient – and interesting service to say the least and an informative interview.

After that, we’re off to reviews of the best products (4 and 5 star files only) released by 3pps, provided by Trev W. and yours truly.

Editing and formatting are very good, I didn’t notice any significant glitches. Layout adheres to RiP’s two-column full-color standard and the full color artwork is nice – on a downside, the artwork from the cover is a bit pixelated. The pdf comes fully bookmarked for your convenience.

This pdf’s article on restless souls is neat indeed and the other contributors also deliver some interesting pieces herein – however, the template is VERY limited in its usefulness and Jacob Kellogg’s offering ranges from superb & awesome to weak. Overall, this pdf offers some nice pieces of content, even though it’s not among the best issues of the e-zine.

All in all a solid offering of “Pay what you want” content that does contain some pieces of crunch that definitely are worth the HD-space – hence my final verdict will clock in at 4 stars.

You can get this magazine for any price you like here on OBS and for free here on d20pfsrd.com’s shop.