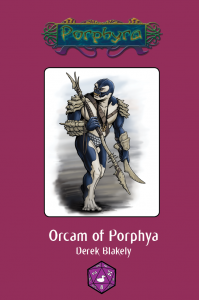 This installment of Purple Duck Games’ “…of Porphyra”-series clocks in at 25 pages, 1 page front cover, 1 page editorial, 2 pages of SRD, leaving us with a massive 31 pages of content, so let’s take a look!

After a brief piece of introductory fluff, we are introduced to the Orcam’s racial stats: The race receives +2 Con and Cha, -2 Int, are medium, have a land speed of 30 ft, a swim speed of 40 ft, low-light vision, cold resistance 5, gain hold breath, are proficient with spears, tridents and nets, gain a +2 racial bonus to Ride checks when riding whales/dolphins and underwater, they may, as a move action, emit an echolocation pulse to locate objects and creatures within 30 ft. – this one can be suppressed by silence. Okay, from the base set-up, we get a powerful race approximately on par with aasimar etc., but one whose benefits are pretty circumstantial – in aquatic campaigns, they obviously excel, whereas on primarily landbased campaigns, the race works pretty well with less powerful races. The race has a unique thing going for it and gets formatting completely right, something pretty rare.

Next up, we take a look at society, alignment, adventuring, etc. – and in the cultural department, the race does have several unique components as well, first of which would be their nomenclature: The race features a “Deep Name”, to be pronounced underwater, as well as a airbound name – and this makes *sense* to me. It may seem negligible, but it is these little tidbits that good roleplayer latch on to and generate whole angles out of. The race features a proper array of age, height and weight tables to supplement it and comes with 7 race traits for your perusal: From slightly better initiative to bulky frames and improved flanking, the traits are relevant, appropriate for their power-level and get the bonus type right.

For more customization options, the race features a total of 9 alternate race traits: These include a primary natural bite attack (which actually is properly codified in every way!), self-only blood rage 1/day, tremorsense while in contact with water and only pertaining creatures also in contact with the body of water, darkvision and light sensitivity, better social skills, better aiding others, Small orcam, natural armor instead of cold resistance or +2 Str and Wis, -2 Cha as alternate racial traits. The array of alternate racial traits is well-balanced against the abilities they replace, the rules-language is precise…and once again, I am left with no complaints.

The pdf also offers 7 racial feats – and here, I can finally complain properly about something! Yeah! The Dorsal Fin feat that increases swim speed…lacks the “ft.” after the increase. … Yeah, sorry. The feat also allows for direction changes underwater, just fyi. Longer range echolocation under water (and 20 ft. on land), gaining a gore attack, speak with animals with aquatic creatures, minor DR and bonus to Escape Artist…intriguing. Orcam rangers (or those characters with favored terrain) can take a feat starting at 5th level to change favored terrain and there is a feat that allows for the better wielding of weapons underwater. The race also gets a racial combat style, the Shark Style – the base feat generates bleed damage when you score multiple hits and helps when fighting underwater; the follow-up feats allow for rend bonus damage versus bleeding foes and free demoralize attempts versus foes bleeding – even if you’re not interested in the Orcam AT ALL, fans of sahuagin may very well get this pdf for this chain alone…it’s pretty damn awesome! There is also an okay teamwork feat that slightly increases damage output when flanking with allies and adds demoralize to crits. The metamagic feat, at +1 spell level, adds splash damage to AoE-spells, which is a nice concept. In a minor nitpick: The feat only mentions minimum damage – which could be read as applying to attribute damage and becomes problematic when combined with fixed damage spells (or maximized ones) – a good GM can easily read the feat as intended, but a tad bit more precision here would have been nice.

The pdf also provides the overdue greatspear as well as the gut razor, which is particularly potent when used in coup-de-grâces as well as the glove-less scaly mail variant of scale mail. Magic item-wise, there is an enchantment for composite bows that allows the wielder to change Str-bonuses – for an applied use of it, a lethal bow can be found here. The ambergris amulet has defensive properties and denotes you as a healer among the orcam. We do get the at this point obligatory electric eel armor, though admittedly, the execution isn’t bad. An Octopus shield that can flail its tentacles and fire ink is pretty cool and a water-themed staff complements the section – all in all, a precise, well-crafted array of items.

The spell section is interesting – blood rage grants stacking bonuses to Str and penalties to AC for damage incurred (with a cap, thankfully), variants of scent-masking and a octopus-inkjet-style variant of expeditious retreat is cool. The 4th level spell Land Shark lets you go bulette! Cool!

The pdf also features racial archetypes/class options, 3 to be more precise. The first of these would be the order of naumachy cavalier order: These guys can’t issue a challenge against a good or neutral target – which brings me to an issue: What if they do? Is the challenge attempt wasted? What about action economy? Not sure. The challenge bestows a +1 dodge bonus to AC and +1 insight to saves, which increases by +1 for every 4 levels. They may also only issue challenges while wearing light armor and carrying no more than light load – all in all, a very restrictive challenge. 2nd level provides a paladin’s detect evil and 10th level 1/day smite evil at 1/2 levels. 8th level lets the order choose a terrain from a limited list and shout orders as a swift action to grant allies within 50 ft. bonuses and 15th level nets the mount the aqueous simple template, which is a bit late.

The Deep Sea Patroller hunter archetype gains an aquatic companion and, instead of animal focus, nets the companion several toughness-related bonus feats and, at 8th and 15th level, the powerful stalwart ability and its improved cousin, respectively.3rd level offers amphibious for hunter and companion, with higher levels providing darkvision. 6th level provides a life bond that allows for limited saving roll rerolls and the means to take excess damage when a companion would be reduced to below 0 hp, instead reducing it only to 1 hp. Instead of woodland stride, the archetype can pass easily through corals, sea weed etc. – though I’d be interested in whether this also applies to damaging terrain. 12th level nets a +3 favored terrain and 15th level provides a continuous freedom of movement for the pair.

The next archetype would be the Searager bloodrager – and here, we have something odd: Tidal Wave Blitz reads “This works as bloodrage, but when a searager charges an opponent he counts as one size category larger for when making a bull rush or overrun attempt.” I am pretty sure something went wrong here – does this benefit only apply while bloodraging? I also am pretty sure that there’s an excess “for” here. The archetype also gains the woodland stride variant – the same question as above applies. 6th level unlocks cure spells, though the pdf fails to italicize them properly. At 7th level, these guys can conjure forth shields of water as immediate actions.

The pdf thereafter continues to tell us about the orcam’s take on respective adventuring classes, including occult classes and those introduced by Purple Duck Games – I like this section, as it provides a better feeling for the culture of the race. This section is btw. also supplemented with a significant array of favored class options, which include the ACG and OA-classes as well as Infinyte, Illuminatus and the like. The section generally is solid. The pdf concludes with a sample level 1 orcam barbarian.

Editing and formatting, for the most part, are excellent in both formal and rules-language departments: The bonus types are clear, the rules-language precise. While there are a few hiccups, these tend to be minor ones. Layout adheres to Purple Duck Games’ 1-column layout standard that results in A5-sized (9” by 6”) books – something to bear in mind regarding the page-count. The pdf sports glorious, original full-color artworks of male and female orcam and comes with bookmarks for each section, making navigation pretty comfortable.

Derek Blakely’s Orcam are a cool race – they have a unique trick, are generally balanced as one of the stronger races and are diverse enough. Their culture is intriguing and, unless you’re playing a nautical campaign with a lot of water where all other PCs are landlubbers, the race shouldn’t unbalance a given group. So yeah, only GMs going for a “airbreathers on the sea/underwater”-style of campaign may want to be a bit careful here – these guys are good in the water! (Then again, if you’re using Cerulean Seas’ more powerful aquatic races as well, this will fit in just perfectly.

For the most part, the pdf is absolutely meticulously crafted with an eye towards cool options and balance at the same time – the race-section, the items, the fluff – all feels like a project of passion and it shows and translates to that. At the same time, the class options are the weakest part of the pdf: The cavalier order is very restrictive and the other two archetypes have evocative tricks, but also don’t reach the level of precision the other content features. They also, conspicuously, are less precise in the formatting-department.

Now that being said, the damn cool Shark Style, the evocative race itself and the nice cultural tidbits included do make this race a welcome addition to environments both aquatic and non-aquatic: Due to the lack of requirement to actually stay wet etc., the orcam make for a viable, nice race to include among the PC-approved roster. One more interesting coincidence: While their culture does not necessarily point towards this and while their nomenclature obviously stems from “orcas”, that’s only one letter away from orc – so if you’re bored by the old green-skins and want something unique and different…why not use these? I certainly have ideas on how to introduce these fellows in my game!

Ah, the verdict. Well, try as I might, I really like these guys and the author shows care and a precise grasp of rules only rarely seen..but considering the minor hiccups, I can’t go with an apex-level rating; for that, the jaw-dropping archetype/class option/whatever is missing. For the more than fair price point, this does remain a very good, if not 100% perfect purchase, though. Hence, my final verdict will clock in at 4.5 stars, rounded up due to in dubio pro reo.