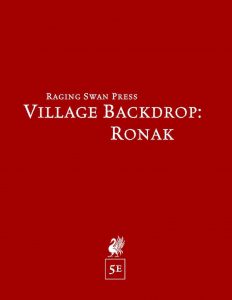 Ronak is a dwarven company’s trade-outpost – or rather, it was. The company has gone belly-up ages ago, leaving the ancestors of the Ronakee stranded in the middle of the swamplands, on lands that once belonged to lizardfolk, dutifully exterminated by the dwarves. This can be unearthed via the village lore provided in the tradition of the series…and it kinda is weird. Why? Because the very first sentence on Ronak is “Nobody knows Ronak exists. Or, more precisely, nobody remembers.” Considering that baseline, a paltry DC 15 check seems a bit odd here…

Anyways, the dwarves of Ronak are insular, yes – and they are, to a degree, forsaken by civilization. You see, the ronakee dwarves no longer truly believe in outside civilization; they are guided by the spirits of the lizardfolk they slaughtered, slowly becoming ever more degenerate, savage…and, most disconcertingly, reptilian. This slow change is also represented in the way in which the whispers and rumors and map are depicted – we have a fortified village of huts on a hill; the villagers are isolated and their demeanor and appearance reflect that; the marketplace section provided also focuses on more shamanistic aspects and has been properly adjusted to 5e’s aesthetics.

Similarly, the classes of the movers and shakers of the village adhere to the more primitive bent; the drug used to communicate with spirits, sawleaf, which is harvested in the bitter bog has been translated to 5e, yes, but honestly, of the three versions, this one is the weakest and the one that feels least like a regular piece of crunch for the system – 1 poison damage, -4 penalty to saves versus curses and effects and abilities of incorporeal undead and haunts…doesn’t feel very 5e-ish.

The scaled dwarves of Ronak btw. get a subrace – Strength increases by 1, walking speed 20 feet, neither reduced by armor or swampy terrain, disadvantage on Charisma (Persuasion) and Charisma (Deception) that may be foregone by gaining proficiency and losing the usual bonuses in proficiency in the respective skill. The dwarf also gets one of 5 mutations – 15 minutes of holding breath, advantage on Dexterity (Stealth) checks in swamps, unarmored AC of 11 + Dex mod, 1d6 bite that increases to 2d6 at 11th level (you’re proficient in the bite) or advantage on Strength (Athletics) checks made to swim. The subrace is potent, but also limited – as a whole, I like it in 5e!

Jeff Gomez’ set-up here is really interesting. I like the idea of colonialists succumbing to their own sins; there is a definite Heart of Darkness-vibe going on here; similarly, the angle regarding the destructive force of contacts with advanced civilizations is something I really enjoyed. And yet, Ronak didn’t 100% click with me; perhaps it’s the scaled dwarf-angle (seen that before); perhaps it’s the mutation factor…or that it doesn’t go full-blown either Chinua Achebe or Joseph Conrad with the colonialist angle…This is, don’t get me wrong, a pretty inspiring village (though the low lore DC makes no sense to me), but it is a village with a concept that could have carried a more forceful execution or a stranger transition. The concepts underlying the premise are so strong, they could have yielded simply more. The 5e-version oscillates between ups and downs – I like the subrace, but the drug, in comparison, felt a bit…less compelling. Still, I consider this version to be slightly stronger than the PFRPG version – hence, my verdict will clock in at 4.5 stars, though I will round down for this one.