Each installment of Abandoned Art’s „You name it“-series so far is 3 pages long, with one page devoted to front cover, 1 page to SRD and 1 page of content, which provides a massive name-generator list.

Generally, the series is system-agnostic and provides just what it promises, i.e. names – 100 male ones, 100 female ones and 100 titles/clan/family etc. names, depending on the race covered, so let’s go through the first 4 pdfs, shall we? 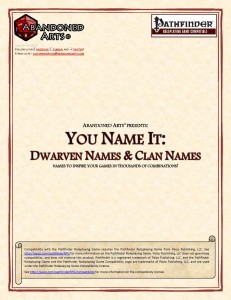 The male names adhere here to mostly harsh consonants and darker vowels, interspersed with lighter vowels to take a bit of the edge off and , like the female ones, adhere mostly to a Germanic nomenclature with names like “Daldir and “Frogund”, but also the eponymous Albrecht and Klaus, which to this day are common names in Germany. The clan names follow the established composite word tradition and include entries like “Firebelly”, “Blackhammer” etc. Unfortunately, there are some entries in this table that are less than superb – “Skullcrusher” to me sounds more like an orc-tribe and “Stonemeier” sounds ridiculous to me. Worst offender would be “Traugott”, though – literally, that would mean “Daregod” or “trusts in god” (if an “In” was eliminated), but the connotation for “trauen” is also “to wed”, evoking unpleasant pictures of bearded dwarves in bridal gowns. These are the exception, though and generally, we get solid lists. 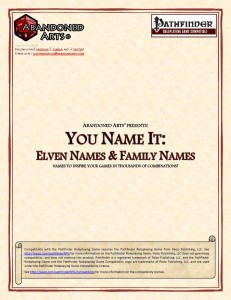 Elven names need a tongue-twisty characteristic, something to underline their ephemeral nature and musical languages and the pdf delivers with slightly celtic-sounding names like “S’aelmyth”, “Tat’hanien”, “Gwennelyn” or “Venalthielle”. Not all names feel like they belng to the same culture, though, as almost Greco-roman-sounding names like “Apathaneon” or “Nephensian” get thrown into the mix. I would have preferred more coherence here. The family names this time around once again consist of two nouns for names like “Ravenclaw”, “Nymphsight” etc. – over all, these are superior to the dwarven clan names as they lack truly problematic entries – though “Thaneseeker” would probably have suited the dwarves better… 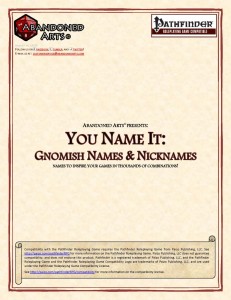 Gnomes are a bit wonky and so should their names be – at least in my opinion. The usage of Xs and other rare consonants works well to enforce this, with “Quogretor”, “Trumpnap”, “Gillycairn” and similar ones looking (and sounding) sufficiently weird to drive home that this is not a human. Not all are hits, though, as “Qualmward” or “Waypest” stand as examples to testify. The nicknames are partially hilarious, though: Yes, we get an entry for “Razzmatazz” and one for “Poppyfluff” or “Catawampus” – I really liked that particular list! 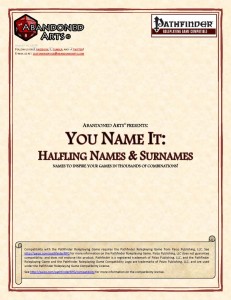 Halfling names in contrast to gnomish nomanclature, face a difficult obstacle – they need to sound down-to-earth, yet slightly uncommon or alien to our ears without being too far off to make them uncomfortable. The solution used in here is to use slightly uncommon names like “Hyrum”, “Wellsby” or “Harmon”- which I per se like. What I didn’t like as much was that there are quite a few names that feel more like monikers – “Latch” and “Bootsie” come to mind. The female list is imho better here, as the male list actually uses several rather common names like “Lee”, “Lenny”, “Hugo” etc. – some slightly more alien names would have been nice here. The surnames, as is by now tradition in the series, once again are made of composite words and mostly hit the nail on the head with entries like “Tweedsleeves”, “Willobold” etc. – only two particular entries in this table imho fall flat: “Hereagain” and “Worrywart” – seriously, these two are just lazy.

Editing and formatting in each installment are top-notch, I didn’t notice any glitches. Layout adheres to a no-frills standard with 6 columns featuring the names in one massive table. Layout-wise, I consider this slightly sub-optimal – separating the one table into three distinct tables, one for male names, one for female names and one for the family/clan/surnames would have enhanced readability and made the page look less jumbled. The pdfs of this series have no bookmarks, but need none at this length.

So…how to rate this? Well, on its own each of the installments delivers names and solidly so, for a fair price. The thing is…Raging Swan Press has a little pdf called “So what’s the Demihuman called, anyway?” that delivers 50 male/female family name entries for elves, dwarves, halflings, gnomes and haf-orcs – for 2 bucks, which, if you do the math, is simply the better deal, so the low-price factor won’t feature in my calculation of the verdict. Combined with the table-issue mentioned before, that’s a detrimental factor that costs these pdfs some ground. That being said, here are my verdicts:

Dwarves suffers from the wonkiest names and overall, while not bad, could have used some finetuning. Hence, 3.5 stars, rounded down to 3.

You can get the file on Dwarves here on OBS and here on d20pfsrd.com’s shop!

Elves get perhaps the coolest names, but suffer from a linguistically ununified nomenclature that feels at times slightly jarring. Hence, my final verdict will be 4 stars.

You can check out those Elven names here on OBS and here on d20pfsrd.com’s shop!

Gnomes get perhaps the coolest nomenclature and while some entries are subpar, they are few and far between – 4.5 stars, rounded down to 4.

You can check out those Gnomes here on OBS and here on d20pfsrd.com!

Halflings suffer in the male list and due to the 2 somewhat lazy entries in an otherwise nice table. Overall solid, but the female list shows that author Daron Woodson could have done better – hence my final verdict of 3.5 stars, rounded up to 4 for the purpose of this platform.

You can check out those Halflings here on OBS and here on d20pfsrd.com!

Finally: Did you enjoy this Bundle-review? Would you want to see more of that type in the future? Let me know!