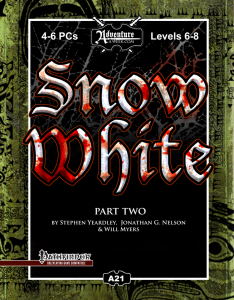 The second part of AaW’s unconventional take on the Snow-White myth is a whopping 123 pages long, 1 page front cover, 1 page editorial, 1 page ToC, 1 page SRD, leaving us with 119 pages of content, so let’s take a look, shall we?

This being an adventure-review, the following contains SPOILERS, not only for this module, but also for part I – potential players should jump to the conclusion.

Still here? All right – the teleport has gone wrong as far as the PCs are concerned – and according to plan as far as the mastermind of Lumi’s kidnapping thinks – the PCs unceremoniously are dumped by the magic in the forest. One very, very cold forest that comes with a whole page summing up environmental dangers before we get into a truly awesome first chapter – an alchemist’s notebook, containing notes on 12 pieces of unique flora and fauna that potentially can be found in the haunted forest. Featuring not only interesting descriptions and usages, these pieces are AWESOME and will be added to the ecology of my gaming world – with harvesting DCs, interesting mechanics and even a nodding towards module A5: Winterflower and stats for this, the world’s supposedly rarest plan, the chapter kicks off the module with one of the best pieces of supplemental material I’ve seen in a book for quite some time!
Now I’ve mentioned that the Haunted Forest is where the PCs are stranded -and hence we also get a rather extensive array of random encounters – which come with their own encounter index, btw., and feature several uncommon creatures seldom seen in modules alongside the more common animals. The exploration of the haunted forest is a welcome change of pace from Part I and manages to evoke a classic feeling of dread regarding the weird forest, making it possible to e.g. insert this module into Midgard’s Margreve by maintaining a similar (yet more fairy-taleish) sense of unfamiliarity.

So what can the PCs find inside this haunted forest? Well, let’s for example take a sentient, mobile bottomless pit that not only makes for a deadly adversary, but which should require some grey matter on the side of the PCs to best. In a feyglade, the PCs can play a new mini-game, fully detailed, called Kasta, with some fey and find a fey (not Lumi!) in a glass casket. The fey has played a trick on a young girl and his grief over the trick going too far prompted him to eat a fruit that sent him into an eternal coma.

In order to awake said fey and find out about the girl, the PCs will have to brave the maze that the girl’s last remaining family has erected to protect her – for her last remaining family is Malthazar, an adopted minotaur pledged to guarding her eternal slumber, awaking her from aforementioned fruit’s slumber also awakens the fey and points the PCs towards her former cabin – whether the minotaur still lives or not depending solely on the bloodthirst of your PCs – non-violence might be the more prudent option.

Whether by a secret entry-way hidden near haunted falls and caves, by accident or via the girl, the PCs will sooner or later find a cabin – a cabin which has been studded via creative traps, for the 7 dwarves in this module would make Andrzej Sapkowski’s terrorist/guerrilla-fighters proud: Belonging to a cadre of humanoids set against human supremacist attitudes/taxation/colonial claims. Oh, and the 7 dwarves actually include halflings and gnomes here and come with full stats – have I mentioned that they have secured Lumi – who has become sympathetic to their plight- whether in truth or by Stockholm syndrome is up for the DM to decide, while player actions will determine whether a party or combat will ensue. In any way, the attendant queen makes her move with the iconic assault, translated properly into PFRPG-mechanics – using e.g. hallucinatory terrain and similar means to make her quick assault easy to be pulled off – though not foolproof.

And it may very well be one of the PCs that wakes up Lumi – from here on, it’s time to decide with which side to ally and how to return to Morsain – there a total of 8 (!!!) varying conclusions depending on the actions of the PCs are possible – though all presume a unpleasant end for Lumi or a heart-broken PC, since potentially getting on the bad side of a prince of Klavek might have massive repercussions, it would be easy for the DM to develop more massive repercussions and thus get a PC into nobility. The queen, meanwhile, may have managed to maintain her charade – and even if she doesn’t, she’ll still have an excellent array of plan B/escape possibilities – we may have not seen the last of the fully statted witch queen.

The pdf also features a new level 9 spell that allows for cryostasis via Winterflower-components, an appendix that describes the short folk resistance and among the stats, we can also find the full stats of the witch’s intelligent dagger.

The final 4 pages of the pdf are devoted to a translation (and a relatively faithful one at that, comparing it with my versions) of the fairy-tale as well as further research links and by now, player-friendly versions of the maps have also been included.

Editing and formatting are very good, though not perfect – I noticed a couple of very minor glitches here and there, though none that impeded my ability to understand the content. Layout adheres to AaW’s 2-column standard with a printer-friendly background and color-coded boxes for the crunch-components. The pdf is fully bookmarked and comes with links to the respective statblocks. Artwork is mostly thematically fitting stock art and, as almost always, the cartography ranks among the most beautiful you’ll find in any given module – this time done by Jonathan Nelson instead of map-guru Todd Gamble, though it’s surprisingly up to the insane standard master Gamble has set.

Part I was unconventional and Part II is also an adventure unlike any you’ve probably run before, featuring a vast array of intriguing locales, things to do, choices to make – and then some, for its modularity and sandboxy freeform-style means that even if taken “only” as a sandbox to scavenge encounters from, this module delivers in spades – each and every encounter has at least one fun, uncommon thing going for it – there is no boring encounter to be found herein. The adversaries act smart, the fluff is stellar and the supplemental material provided is simply the cool icing on the awesome-cake. Yes, I’m going to hit myself for this pun – later. This module is not particularly cheap, but its quality and the sheer guts to do something rather different should imho be rewarded – quality trumps quantity and this module is nothing, if not quality.
For this module, more so than even its direct predecessor, is uncommon – it endeavors to deviate from both what one would expect from the source-material, but also from conventional adventure writing, making this work not only as a module, but also alternatively as a superb sandbox to scavenge fey-style/dark forest weirdness from by the encounter. If you’re looking for a wilderness sandbox in a fey forest, then this is an absolute must-have – an actually GOOD wilderness module brimming with ideas, Snow White Part 2 even beats its rather excellent predecessor and hence my final verdict will clock in at easily given 5 stars + seal of approval – Adventureaweek.com’s author-team has delivered a thoroughly compelling two-parter and one I wouldn’t mind seeing sequels to – “Little Red-Riding Hood, Werewolf Hunter”, perhaps?

Want to pep up the Margreve? Run a twisted fairytale? Fed up with standard modules? Get this great piece of writing here on OBS!