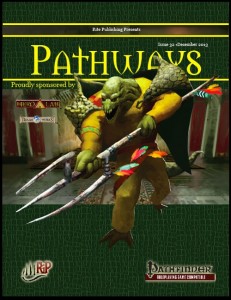 The latest installment of Rite Publishing’s “Pay what you want”-e-zine Pathways is 49 pages long,  1 page front cover, 1 page ToC, 10 pages of advertisement, 1 page SRD, leaving us with a massive 36 pages of content, so let’s take a look, shall we?

David Paul’s editorial this time around poses an interesting question – since Pathways has gone from free to “Pay what you want” (which is semi-free/dependent on your appreciation of the magazine), he asks what YOU would like to see and you would pay for seeing the respective content.

After that, we are introduced to Steven D. Russell, aka “Grandmaster of Templates”/Rite Overlord’s template for the issue – the CR +3 Kingkiller Creature: These creatures are chaotic evil harbingers of ruin and decay – with the power to slay servants of a kingdom, inflict wounds that are cursed and can only be healed by specific individuals under specific conditions, Furthermore, these harbingers of destruction can absorb spells (though they may be overcharged!), rejuvenate and gain a specific scourge upon creation – whether it be fire, madness, blight, storms, pestilence or war – while two of the scourge-headlines are in italics, not as intended in bold, this template is just too AWESOME. Representing creatures foretold by prophecy, legendary slayers of not only rulers, but also their very  kingdoms, these beings are powerful, iconic and add a whole new level of threat to a powerful villain. AWESOME and one of the best templates Steven D. Russell has ever created. Drool-worthy and well-supplemented by a CR 9 Scourge of War Lizard Kingkiller, an advanced lizardfolk fighter 2 with the template applied.

Liz Winters has an article on the benefits of imaginative play (like RPGs!) in the formative years of children – and believe it or not (though she provides some examples of literature), I can attest to the impact roleplaying (though I didn’t know it by that name then) has had on me, my creative output and my very frame of mind, not to start with vocabulary and so on – parents and fellow gamers should definitely check that article and do some further reading.

Mike Myler, known not only from his ample contributions to Adventureaweek.com, but also for his solo-venture provides a mapless module herein for level 3 – 4, named Quadrial’s Tower.

SPOILERS FOR THE MODULE

The wizard Quadrial has gone missing and this is due to an experiment going wrong – seeking to create learning golems from an obscure metal dubbed *drumroll* Asmov, but ignoring the required laws of the almost namesake author, the wizard feel prey to a combination of a young cloaker and the attacks of his own golem. Tiny at first the threat returns upon defeat again and again, each version more powerful than the one before, while the cloaker starts his sabotage of the tower. Via anautopsy, some decutiona dn sheer perseverance at destroying the golem again and again, the PCs may put an end to the threat and uncover the details of the wizard’s grisly fate. A creepy, hardcore  challenging sidetrek – nothing to complain. And yes, the narrative, non-mapped nature at least for me works rather well – I ran 3 whole campaigns sans maps and my players are accustomed to it. In some complex environments, it could become problematic, but here, it works. Nice one!

Creighton Broadhurst, mastermind of Raging Swan Press, has an EL 8 encounter versus the Gnoll slavers of Yog Parof here, with Zog Ahl the gnoll cleric 5, gnoll skeletons, zombies and fighters all fully detailed. Furthermore, we get 8 random events to spice up the desert-bound battle. Neat and fun one!

Next up would be a spell-list of antipaladin-spells for 1001 spells -cool and handy!

Now next up would be an interview that actually touched me – when Rocks Fall Games came around, Charles Marleau, the head-honcho, had created modules I considered terrible. Conversely, I wrote some (even for my hardball standards) harsh reviews. Instead of spite, he replied with kindness, which bespeaks of a mind able to process criticism – which is good to see…but not enough and no substitution for talent. I was skeptical, but turns out, he and his team have revised a couple of their modules so far and the results have universally been IMPRESSIVE – these guys actually do have talent! Never in all my time as a review have I seen products that once were almost utterly generic zeroes make such a thorough transition to full-blown, soulful awesomeness. If you haven’t, give their revised modules a chance – these guys have talent and by now I actually look forward to their releases as they seem to get better with each and every one of their products. So yeah, read the interview and take a look at Rocks Fall Games’ Dark Totem-modules – they are extremely affordable and fun!

Speaking of reviews: As always, a selection of 5-star reviews of 3pps and Rite Publishing itself are provided, offering you a sweep of some awesome 3pp-products  – the reviews you’ll get are by Trevor W., Joshua “KTFish7” Gullion, and, of course, by yours truly.

Editing and formatting are good, though not perfect – I noticed a couple of minor formatting and editing glitches here and there, though only cosmetic of nature. Layout adheres to RiP’s 2-column full-color standard and the cover-artwork is neat. The pdf comes fully bookmarked for your convenience.

A cool interview with one of the lesser known rising stars among 3pps, a useful spell-list that makes a cult-book more useful, a neat encounter with cool environmental effects – all that is nice.

Where this issue shines is with Mike Myler’s rather cool mini-module, which offers more challenge and weirdness than many commercial modules…and Steven D. Russell’s template. The Kingkiller is just so AWESOME – with his templates seeing a lot of use in my game and “The Book of Monster Templates” as well, I thought that one of these days template fatigue would set in – and then he suddenly crafts one of perhaps the most intriguing, awesome templates I’ve ever read. this template alone is worth the HD-space on its own – seriously, you SHOULD check this one out – it’s templates like this I will judge Green Ronin’s Advanced Bestiary against once it releases and it will have a hard time versus awesomeness-beasts like this one. Believe me, the kingkiller is worth a donation. EDIT for clarification: While there are rules for kingkillers versus kingdoms (WHICH ARE AWESOME), I would have loved additional rules interacting with armies as well, but I am just greedy here. ^^

Final verdict? One of the best Pathways e-zines ever released, 5 stars + seal of approval, even if it would have a fixed price. At PWYW, there’s no excuse – Get this as soon as your download speed allows.

You can get this cool e-zine for any price you want here on OBS or for free here on d20pfsrd.com’s shop!