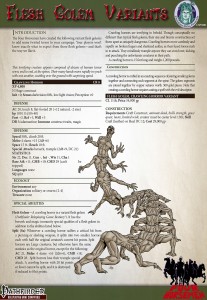 The first pdf of Christina Stiles’ solo-venture into publishing presents concepts by the author-group “4 Horsemen” – consisting of Dan Dillon (Death), Gillian Fraser (War), Steven Helt (Famine) and Stephen Rowe (Pestilence). The pdf clocks in at 8 pages, with 1 page being taken up by editorial/SRD, so let’s take a look at those creatures:

The first adversary herein is the CR 8 Crawling Horror – think “Human Centipede as a golem. Also rather disturbing – up to a point, sufficient damage via piercing or slashing damage may actually split the adversary, resulting in a battle versus two of their ilk. Paradoxically, this makes the smaller versions hit better (size reduction resulting in -1 less penalty to atk), but of course also increased damage dice – from 2d8 to 2d6. First of all – kudos for getting that one right…though honestly, in this case, I would have considered a no decrease in damage-dice okay as well – after all, the slam attacks are still done by the same creature’s weapons.

Now Spiritflesh Golems are where it gets weird – at CR 10, these beings deal str-damage and can possess foes magic jar-style and as flesh-golems…well, they have no flesh. They are essentially flesh golems whose flesh has been dissolved in a special creation. Now where I’m not wholly sold on the efficiency of these creatures is with the result of their incorporeal touch -upon reducing foes to 0 str, the foes turn permanently incorporeal. While there are means of surpassing said hindrance and restoring corporeality, overall, the ability feels more like a boon to me: While in-game, losing the body is horrific, out-game being in an incorporeal state offers A LOT of significant bonuses and unlike similar abilities, the player seems to be able to maintain control over their character. Essentially, the golem makes the enemies stronger in the long run, which makes it a curious adversary that is rather cool, but also one that can unhinge game-balance. Personally, I’d advise you to kill off reduced characters and spawn them as incorporeal undead.

The third critter herein is the CR 14 Stitch-Golem. Wow. Just wow – this golem has a beneficial aura that automatically quells bleeding and stabilizes the dying – which can be surpressed. War is hell, they say – and this one is hellish indeed – trudging the battlefields, these golems, stabilize their own allies while at the same time grappling foes, pinning them and RIPPING THEIR LIMBS OFF. Yes. Ouch. Worse, their magic keeps the torn apart limb fresh and allows them to apply their ghoulish trophies to their ally, essentially stealing the limbs of the fallen and dying foes to heal the ranks of their allies. Now if that is not a weird, deadly and twisted idea, I don’t know what is – awesome!!!

The final creature herein is the CR 8 Witchfleshgolem: Those subjected to this golem’s attacks become more susceptible to the special abilities of hags, witch hexes and necromancy [curse]-spells. Worse, they also come with an aura that forces you to roll d20 twice on a failed save. Worse – one of these things counts as two hags for the purpose of forming a coven, allowing essentially for covens of one! Oh, and they don’t require active actions to contribute to cooperative magic. OUCH!

Editing and formatting are very good – apart from one harmless “/” missing in a DR-entry, I did not notice any glitches. Layout adheres to an easy-to-read two-column full-color standard and the pdf comes sans bookmarks, but needs none at this length. Jacob Blackmon delivers one haunting piece of awesome full-color artwork per creature – not something I would have expected at this fair price-point! Especially the Witchfleshgolem’s artwork is haunting and evocative indeed! The pdf comes in two versions, with the second being more printer-friendly.

The first golem was a mechanically solid oddity-creature that managed to get the relatively complex split right. Still, while following the rules, I can’t help but feel that in this instance, e.g. specially shaped threat-ranges, a grappling/pinning option…something like that that utilizes all those limbs, would have rocked. The Spiritflesh-golem is a cool idea, but doesn’t work logically in-game for me. The Stitch-Golem and the Witchflesh-Golem, though – disturbing GOLD with abilities that make sense, are unique and just glorious. Especially the Stitch-Golem is just impressive as I can see the pragmatist’s reasoning, the veterans returning home with discolored, alien limbs, the ostracized shell-shock, the phantom-pain…the friggin’ VAST narrative potential. The Witchflesh Golem is similarly intriguing and allows for races versus hags to creating and lends itself well to investigations of missing familiars etc.

At first, I wasn’t too blown away, but getting two SUPERB creatures, 1 good and 1 okay one with top-notch production values for a price that is a steal indeed means that this pdf is well worth a final verdict of 5 stars. I’m looking forward to any future offerings of Christina Stiles Presents!

You can get these deadly golems here on OBS!