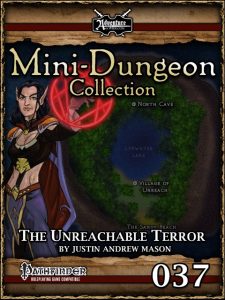 This pdf clocks in at 2 pages and is a mini-dungeon. This means we get 2 pages content, including a solid map (alas, sans player-friendly version) and all item/monster-stats hyperlinked and thus, absent from the pdf, with only deviations from the statblocks being noted for the GM.

All right, this mini-dungeon presumes that one PC is subject to some sort of divine quest: A remote and almost unknown shrine of the deity, situated on an island where the eponymously named village of Unreach is found, has been subjected to an unpleasant curse: The island looks like a horseshoe bent almost to closure, with steep cliffs everywhere but on the Southern side, where a shore can be found. The aforementioned village is also known as the edge of the world and the settlement comes with full settlement stats, including fluff-depictions of notable PCs and a box that contains investigation clues to be unearthed. The trail of said clues identifies the plague affecting the village as demon fever and points towards the doing of hags…and indeed, the PCs will have to deal with night hags here…but even after winning, they will not have prevailed; astute PCs will note the bloated corpse of a villager they have probably talked to – said villager would be the final hag, who has infiltrated the village – dealing with her final concludes the curse, with the night hag heartstones providing a means to deal with the plague.

Justin Andrew Mason’s “The Unreachable Terror” pushes the envelope of the format in a great way; any halfway decent GM can extend this module with more clues, roleplaying, random encounters etc. to a full-blown adventure situated on an evocative island. While the module is slightly harder to include in a campaign than usual (you need a remote island – no problem in nautical environments, though!), it is also significantly more rewarding than most. In fact, if e.g. your convention-GM fails to show up, this makes for a flavorful, interesting module you can run on the fly. If you’re good at roleplaying, you can easily get a whole day’s worth of gaming out of this mini-dungeon. Alternatively, you can use this as a kind of backdrop for its nice map/village as well. Nice attention to detail: The settlement’s impoverished condition is removed upon the PCs being successful in this adventure. While slightly more skill uses for clues than just Diplomacy would have been the icing on the cake, I found myself really enjoying this mini-dungeon, mainly for the nice level of dressing it manages to cram into its small array of allotted text. Concisely written and flavorful, this is well worth a final verdict of 5 stars.

You can get this nice environment/micro-sandbox here on OBS!