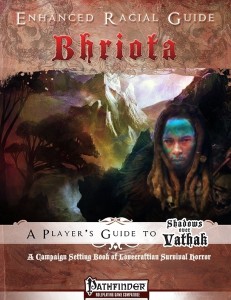 The Bhriota are a human ethnicity and as such, I feel I should mention one fact – I’m a huge fan of human “races” – chalk it up to my extensive reading of Sword & Sorcery literature, but I’d rather have different stats for different ethnicities than x pseudo-humanoid races with almost human cultures and outlooks. It’s a matter of taste and thus, I am rather in favor of the base concept of the Bhriota. Now of course, one may suppose that such rules may not necessarily be perfectly politically correct, but then again, the same argument could be applied to all humanoid races, so I’m going to ignore this discussion for the matter of this review – as long as the fluff is great and the crunch lines up, I’m happy.

Now the semi-nomadic Bhriota are a people essentially sundered – chosen to be custodians of a seal holding the old ones in check, the majority of their race has succumbed inevitably to the seeping unearthly corruption imposed upon them by the dread things from beyond. Rules-wise, Bhriota receive +2 Str and Con, -2 Cha, +2 to intimidate, a bonus feat, weapon familiarity with axes and Bhriota weapons. Generally, the race is cool, but the dual statboost to physical attributes gear them slightly too strongly towards melee-roles for my tastes.

Extensive information on takes of the respective classes, outlooks on religion etc. are all provided and we also receive favored class options for all core and APG-classes – these generally are well-balanced. No issues here! As has become the tradition, Bhriota may choose from an array of alternate racial traits, which include exchanging the intimidate bonus for stealth or increased resistance against diseases and similar conditions, better CMD (or saves)for weapon familiarity. Once again, no complaints here.

We also receive 4 racial archetypes – the insane assailant can enter a reactive rage that also doubles as a confusion-effect on him in favor of better DR and scaling, powerful damage boosts. Over all, an archetype high in concept, if a bit on the weak side for my tastes. The Savage Huntsman ranger is a specialist of traps, being able to add negative conditions to their effects. Additionally, these guys may temporarily decrease their favored enemy bonus to attack a suiting creature and apply negative conditions upon targets – a damn cool mechanic: Finally, something interesting to be done with boring favored enemies! Over all, a cool one!. The esoteric binder summoners receive diminished eidolons in favor of expanded spell-lists and have his eidolon deliver touch spells. Thankfully with a caveat that prevents stacking of held charges. Spell-like abilities and an aura that cancels out morale bonuses and penalties make for an interesting archetype as well. Finally, there would be the Bhriota Witch Doctor – who uses con instead of int as governing attribute – highly uncommon! Patron-access is limited, though, and in order to learn hexes, these guys need to live through permanent disfigurements, which will see them ostracized in most civilized societies – the mark of agony clearly denounces them as adherents to unsavory practices and rites. In lieu of a familiar, these fellows receive a fetish mask to act as their channel to their patrons, which they later can enchant. Additionally, 1st and 10th level hex are fixed via the 2 new hexes: Rending hex duplicates a 1/creature/24-hours inflict light wounds, while another forces open wounds healed and deals damage + bleed – which can only be stopped by regular heal-skills, not magic. The first hex may be a bit much – every day, infinite inflict light wounds, provided you meet enough different targets feels a bit much, especially in combination with the con-based casting – con being the most useful stat for casters anyway and the lack of MAD of the witch class making this more grievous. While the implied social stigmata of this archetype, when properly evoked by the DM, may offset these balance concerns, unfettering this archetype from its fluff and the peculiarities of the setting may see this not work anymore. So, while not downright broken, one option that requires deliberation.

Next up are 10 new racial feats – Bloodlust being the first, allowing you to add base will-save (NOT the modified one) to atk and damage against uninjured foes. Wait…come again? While the bonus thankfully is not the modified will-save, the damage+atk bonus’s scaling surpasses similar feats almost immediately and increases the mook-mowing capacities of charges and vital strikes further. With the rather low prereqs, especially for multi-class builds a nasty glass-cannon enhancer that needs some nerfing. +1AoO with unarmed strike is neat, as is better charging versus inanimate, unattended targets. rerolling fear-saves, resistance to saves versus disease and poison – per se cool. Odd, though – the Grudge Bearer-feat, which allows you to retaliate against racial hatred foes with +1/2 last received damage on the next weapon damage roll. Apart from the obvious means of exploitation, the race does not receive hatred – so it can’t take the feat. Attacking unattended objects whenever you miss makes sense and applying wis-mod, if negative, as a bonus to will-saves while raging makes thematic sense for insane characters. Penalizing perception and concentration while in the presence of a non-instantaneous spell’s area of effect at +1 spell level would be interesting. Making full-damage attacks against swarms as a standard action (somewhat akin to vital strike) also is within the boundaries of what I consider valid.

We also receive quite an array of different traits – from minor bonuses to small pseudo-rages and birthmarks that denote the chosen of the Old Ones, these traits generally are well-crafted and supplied with nice fluff.

Next up would be Bhriota Rune Magic – using the rules via Rune Catser and providing full synergy with e.g. how they are handled in Northlands and similar publications, we receive an array of various runes – including a total of 6 feats to dive into runic magic, should you not be familiar with the concept. The runes per se are rather awesome and well-balanced, though minor exceptions can be found – the Na’arlosham Rune for example, allows you to do the following: “Invoked upon a spear, the rune invokes divine favor from the Old Ones upon the first character who throws it over the head of an enemy force (nine or more opponents) in the next nine hours.” -so what are the benefits? Another rune that nets you a bonus of +20 to the next bull rush attempt executed may feel a bit excessive. Why not opt for a scaling benefit depending on HD? On the cool-side – we receive a drawing for each rune – nice!

The Bhriota Shaman-PrC receives 1/2 BAB-progression, 1/2 ref and will-progression, full spell-casting progression, up to +5d6 sneak attack progression,d6 and 4+Int skills per level. The class receives a curse board with which to curse adversaries and special dances, which allow for the casting of particular spells (depending on the school) as spell-like abilities a limited amount of times per day. Alas, the class seems to have undergone some revision – the PrC’s table sports various abilities like ranged legerdemain that are not listed in the class’ write-up – while I *know* what these do, I’m happy they *seem* to have been cut – this PrC is rather strong even without them. That being said, the PrC is still feeling like it’s missing half its content. Fun fact – Herbal Remedies, gained at 3rd level, is also missing from the table. So yeah, massive update glitch.

We also receive an array of cool, generally balanced and rather flavorful Bhriota-specific weaponry – sneak attack with specific darts reduces movement, special caltrops, a sacrificial kit – glorious pieces, even before the alchemical war draughts and war paints. A total of 4 different magical items, from aberration blood to insanely powerful, high-level bone rattles (almost 2K price!) and a cool two-bladed sword make for interesting options – the latter increases its enchantment by +1 upon scoring a crit, changing its bleed damage to cold damage for a limited time makes for an interesting mechanic. As a particularly nice service for guys like yours truly, we also receive a legendary weapon. These would be weapons that require specific wielder-characteristics and in turn, increase in potency with their wielder – the swords of legendary Vathak, Ataciber and Reratuv, scale in 10 steps over 20 levels and makes combatants truly fearsome indeed – a cool, almost artifact-level weapon-duo, though one I wished had some unique traits.

Now the next chapter would be among my favorite in this book – here, we receive tribal symbols and glyphs and complete write-ups of the corrupted, degenerate tribes. A total of 4 such tribal write-ups, full of great hooks, can be found herein and each write-up sports two exclusive alternate racial traits – no complaints there!

Editing and formatting are better than in any Fat Goblin Games-pdf I’ve read in quite a while – very good, actually! Layout is beautiful in all the right ways – the 2-column full-color layout is easy to read, beautiful and still printer-friendly. The full color artworks, original pieces, are STUNNING. Seriously, these pieces are GORGEOUS and have their very own style and allure, rendering this pdf over all a true beauty to behold. The pdf comes fully bookmarked for your convenience.

Rick Hershey always had potential as both designer and writer. The glitches lay in the detail and so, the presence of line developer John Bennett is felt indeed – this pdf is a joy to read. Its fluff is superb and of a high quality that makes reading this pdf inspiring. The quality of the crunch also has seen a significant step upwards – the majority of the content herein is rather cool and there indeed are some rather damn cool ideas in here. That being said, the few broken feats and glitched, unusable PrC somewhat neuter this pdf’s otherwise stellar track-record. Were it for the fluff only, I’d rate this 5 stars +seal f approval, but with the glitches, I can’t go any higher than a final rating of 3.5 stars, rounded up to 4. Still, consider me rather intrigued about Vathak – I now really want to see where the Fat Goblin Games crew takes the setting with this increased quality!

You can get this racial supplement here on OBS and here on d20pfsrd.com’s shop.