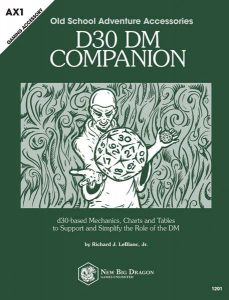 This review was requested to be moved up in my reviewing queue at the behest of my patreon supporters.

Okay, so, this supplement begins with a page that explains the D30 (and how you can use it I conjunction with this supplement); this includes e.g. referencing d30’s digits separately to index two resulting outputs on the same table: There are essentially 3 rules conventions: A single result can spring from a single roll; two results can be sourced from a single roll, and thirdly, there is the convention where the d30 (almost) faithfully replicates a simultaneous rolling of a d and a d10. The tables sport 4-letter title codes for quick and precise referencing, the respective entries, if leading to other tables, reference the respective pages, and there are plenty of alternate tables – these are denoted by the same capital letter and number, plus a lower case letter. This may sound like a lot to wrap your head around, but you can essentially use this book without even taking a look at this admittedly helpful introduction.

This out of the way, we get a whole page DM mapping glyphs – which include slide traps, one-way-doors, etc., and a worksheet for the dungeon. I loved this inclusion, and there is but one thing I was slightly disappointed by: I’d have loved for the mapping features to work via drag and drop. Why? Because I am INCREDIBLY bad at drawing maps. I suck so bad that even the super handy glyphs suggested here are a bit of a stretch for me (and they ARE mega-simple), so having a drag and drop version would have been the icing on the cake here.

As far as rules are concerned, this attempts to be as system agnostic as possible, with B/X as a frame of reference – the more your game/system deviates from this classic baseline, the more minor modifications you’ll have to include…or not. It should be noted that a significant part of the tables presented herein remain valid for pretty much any D&D-adjacent fantasy game featuring 6 ability scores.

The next thing you’ll need to know, would be that this is NOT a supplement intended to inspire you; it is no grand dressing generator. Instead, this is essentially a DM’s/GM’s aid that needs to be thought of as a capital letters TOOL. If you’ve ever attempted to build something from Ikea with only the throwaway tools included, you’ll have developed a serious appreciation for a good tool; same goes for a screwdriver that really fits your hands. The more you work with something, the more you’ll appreciate having the right tools for the job.

In that way, this supplement can be considered to be an omni-tool that eases the GM’s burden – particularly if you enjoy making your settlements, worlds, etc. detailed and plausible. Take the classes character attribute generator: It’s super smooth: You check out a table that features all 6 ability scores, and assigns letters to them – for example an A in Strength, a C in Charisma; some have minor choices and list two letters – if you’re using the higher letter in one, you’ll use the lower letter in the other ability score. So, for example “B/A” in Dex and “A/B” in Con, you’ll choose A for one, and the other will be automatically B. Then, you roll a d30 and check it against a small table, looking at the respective letter’s row: A starts at 15, and ends at 18; B starts at 13 and ends at 15 – you get the idea. It should also be noted that non-combatants are covered as well; and we have a general d30 table of broad motivations. Quick character inventory (including ones for classes such as druid, monk, etc.) also help render the process as painless and quick as possible; weapons are determined by the 1s digit, armor by the 10s digit. Never again spend much time fretting over village cleric or bandit chief creation – with a scant few rolls, you’re done – and that includes the dreaded “list mundane equipment “stuff.

After this, we get to dungeon feature generation: The first roll determines the general construction and lighting used; additional features can be added, and further tables net door types and door obstacles/drawbacks; beyond these, we have miscellaneous dungeon embellishments like talking items, magical furnishing, religious items, general weirdness and geological phenomena. Did I mention the two tables of miscellaneous debris, or the remains generator? The latter lets you determine sex and race, then property and degree of decomposition/damage, and then we have physical evidence of altercations and even a separate table for olfactory evidence of combat.

Did I mention the mighty generator that lets you make 27K different molds, slimes and mushrooms? I mention that one, as it, in spite of being mostly system-neutral, actually notes miscellaneous effects that can range from tightness of breath to abdominal issues? As a language nerd, I also learned new words here – like “infundibuliform”, which means funnel-shaped. And yes, this is explained, so no need to take out your thesaurus! Cool! I wouldn’t be the asinine German I am without mentioning one nitpick here: There is a typo here – the word describing shrooms with central bumps/knobs should be “umbonate”, not “ubmonate[sic!]” unless I am sorely mistaken and ignorant of a variant spelling.

The room trap generator is also pretty impressive – while it doesn’t put spell-reference in italics, it does denote them (MOSTLY) consistently with “as spell”, with blinding light being an exception; type area of effect, trap difficulty and ceiling/floor/barrier traps are all covered. Containers and magic traps/treasure protection are provided for as well. A quick and dirty poison generator is also presented, with only the damage determination outsourced to the GM. This section does help with making such traps, but it does not help with foreshadowing them in a fair manner. I would have loved seeing that taken into account as well.

The next couple of pages are filled with MASSIVE tables for monster encounter generation; the “#AP”-column denotes the number of monsters appearing – you roll a d30 on the bell-curved results table, and there is a chance for second rolls here as well. The engine takes classed encounters into account as well, and features separate columns for common and uncommon encounters; the d30 denotes whether you roll on uncommon or common, and at higher levels, namely 6-9, there is a chance for differentiation between 3 subgroups as well. We get tables for all levels from first to 9th, and a table is provided for edition-specific monsters such as good ole’ copper colossus to lamia, ranging the gamut from 0e to 1st edition Fiend Folio. A human and demihuman encounter table is also included, with some standard magic items – these are not very interesting, and a generator to make more interesting ones? Would have totally been nice.

“But endy,” you say “I’d have to flip tons of books!” Nope, you don’t. The companion sports a MASSIVE monster list. This list notes HD, AC, attacks and damage, move, saving throws (using the class equivalent notion of e.g. B/X – saves as Fighter 2 is noted as F:2), treasure types and special attack: Rhinoceros beetle: Horn = 6’ long”; “teleporting “blink” attack (10’-40’ feet) for the blink dog, etc. Does this mean that you don’t have to know how these work? No. But an experienced DM/GM can use this as a great frame of reference. Particularly with e.g. B/X etc., this runs very smoothly.

After pages of pages of these lovingly compiled lists of data, we get a very detailed and smooth treasure hoard (mistyped as “horde” – a pun or hint at the ‘zine?) generator, which lets you roll the details of even electrum pieces found! B/X GMs get treasure type conversions for direct use with their system as well. Jewelry gets a generator as mighty as that for the molds, with distinct tables for dwarves and elves, and also some magical properties – these remain pretty vanilla, and represent one of the few instances where this book is not pitch-perfect; The magical item creation does come with dressing, basic types and additional powers, with scrolls e.g. including ivory tubes and the like, but I’d have loved to see some more interesting effects and/or drawbacks security measures here.  The two pages of tables for miscellaneous items fare better here. There even is a whole page devoted to tables to make summon/control/etc. items. The potion table does that better: It features tables for taste, odor, color and look – so if your players ask how that weird potion smells? You’ll always have an answer.

Editing and formatting are very good on a formal and rules-language level – particularly considering that this seems to have been the first book penned by the author! Layout reflects the demands of the tables – from massive tables to multiple small ones, there is the maximum amount of content jammed in per page. This is a super-dense supplement to process. The pdf comes with detailed, nested bookmarks, and the inclusion of worksheets is very much appreciated. I can’t comment on the merits of lack thereof of the print version, since I do not yet own it.

Richard J. LeBlanc, Jr.’s companion is a supremely mighty tool; if you’re as OCD as I am regarding the finer details of encounters, items and, in some instances, dressing, then this will help you mask the material that you lovingly handcrafted and the stuff that you handwaved and/or didn’t account for. The book is conceptualized in a way that allows you to use most materials contained herein in a fluid manner without interrupting the flow of the game. This is not a dressing file or typical GM aid – it is wholly focused on functionality, and it does this task exceedingly well.

Much like proper tools help you assemble Ikea furniture quickly, so does this greatly speed up one of the more tiring aspects of your GM duties. This may not take the big concepts off your plate, but it does help you deal swiftly and efficiently with all the boring, tedious busywork of GMing, and allows you to focus more on the fun. This may not be a book that many will immediately love – but it is a super-powerful, detail-oriented and helpful tool for your arsenal. My final verdict will clock in at 5 stars…and due to the super low and fair price-point (just $3.00 for the pdf) this also gets my seal of approval for an exceptional bang-for-buck-ratio.

You can get this mighty toolkit here on OBS!

The Print on Demand version may be found here!