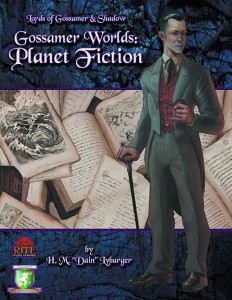 This deluxe-length-installment of the excellent Gossamer Worlds series of Diceless-RPG-supplements clocks in at 41 pages, 1 page front cover, 1 page editorial, 1 page ToC, 1 page back cover, leaving us with 37 pages of content, so let’s take a look!

Okay, want the short version? If you’re even remotely bibliophile, then get this.

The long version of the review will be a tad bit more complex and enlightening: Picture, among the myriad of possible worlds out there on the Grand Stair a door that leads, more literally than others, straight into imagination – or rather, into the direct representation thereof. To be more precise: Think of the world of Kipling, Doyle and similar authors, of a world in the throes of a steamtech-infused industrial revolution, a world wherein our very fiction and tropes, those that arguably continue to influence our very world, have achieved reality – conversely, what we have here is a bibliophile’s love letter, a semiotician’s passion project: When the primary colonial power is called Great Albion and incorporates the fabled realm and London’s ample depictions into a blending that exemplifies rather well the original goal of allotopian fiction as popularized by the recent resurgence of steampunk aesthetics.

Beyond that, peaceful, fairy-tale-esque kingdoms like Graustark (literally: Grey-strength), Ruritania or Gérolstein (one accent away from a real life German place famous for the sparkling water) complement an interesting tapestry – particularly considering the harsh climate of the latter in combination with sporting a fine military and the continent’s first air force – if the like seems none too inspiring, fans of Japano-RPGs may want to take a look at the plot of Tales of Graces F -and don’t be driven off by the cutesy graphics, the plot is rather mature. But back to the topic at hand: From Mykenos to Siebenbürgen and Transsylvania (yes, there’s a distinction made here – and you’ll know why once you read this book…), there are a lot of nations depicted herein, often based on the merit of their literary providence and prominence – and yes, there is, obviously, a titanic mælstrom.

Taking the real life genre-implications into account, one should also not be surprised to see the topics expanded even further – after all, the genres would not be half as varied without the examples of exotism and, admittedly, Orientalism, that also find their representations herein in the coverage of the Silken Road, from the Middle East to the far away shores of Koryo-no-Shima. However, all of this beauty and wonder does come at a price of significant inconvenience for the discerning gossamer lord or lady: there is no easy exit door to leave Planet Fiction – and there is a reason for this, though, in the exceedingly well-written prose, it required the logic of none other than Sherlock Holmes to deduce the true nature of Planet Fiction. And NO, I’m not going to spoil that revelation, whether it is true in your game or not, here in this review.

Instead, I should like to draw your attention to the rather diverse NPCs provided herein, which come with a low point version, a middle range version and one truly high-powered one: From Sherlock Holmes to Captain Nemo to Cassandra, Sheherazade to Umslopogaas to Hua Mulan and even eminent Judge Dee and Mowgli can be encountered in this wondrous world, wherein, quite literally, all those Jules Vernes-novels, all those slices of childhood and classic literature, come to life.

H.M. “Dain” Lybarger has woven a very clever world here – granted, the basic set-up already is pretty much every child’s dream – I know I imagined, while lying bed-ridden at home, what would happen if Sherlock Holmes met Judge Dee, whether Mulan and Nemo wouldn’t make for an interesting couple – and I discussed this to no end with my friends, often providing cliffnotes for those that had no ambition of matching my reading speed due to actually being able to play outside. Try as I might, I can’t really approach this book neutrally – it tugs at too many of my heart’s strings and does so with a clever, if not exceedingly clever, manner – it wouldn’t have required Sherlock Holmes, at least in my opinion, to deduce the obvious de-facto ruler and go one step beyond…but that may just be me being a pretentious wise-ass.

What I’m trying to say is that this book, this world, has pretty much all the potential you can ask for in a given world – it allows you to freely scavenge among your literary preferences and change, adapt and insert – and it still manages to retain a somewhat unique identity, something woefully absent from many books in both the Steampunk and (Neo)-Victorianism genres – this world, in spite of its fictitious nature even within the level of the game, retains a reality that surpasses many fictional settings that do not exhibit the meta-level of fabulation-awareness depicted herein. We have themes resonating on very primal level and a gorgeous canvas on which one can apply the very colors of one’s imagination. My final verdict will clock in at 5 stars + seal of approval – the only people out there to whom I would not recommend this, are those that don’t like reading…and I’m honestly not sure whether such persons exist in this hobby.

You can get this inspiring setting here on OBS and here on d20pfsrd.com’s shop!

Do you like the Gossamer Worlds-series and want those smaller, regular releases in print as well (and bonus content?) – well, as per the writing of this, there is a fully funded kickstarter for just that, with 3 days to go – so take a look here!