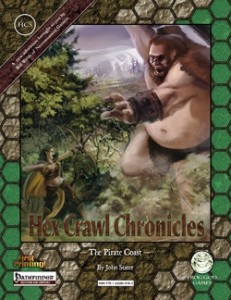 All right, still here? Much like the fourth installment, we get two full pages of hexes to crawl through, though approximately a third of them are made up by the sea. As with other Hex Crawl Chronicles, it should be noted that this is a wilderness sandbox, where PCs journey from hex to hex, stumbling over adventure and embarking on player-driven quests – this is essentially one huge sandbox in the truest sense and hence, not all adversaries that can be found or fought here adhere to one CR or come with complete statblocks, though you’ll find no shortness of those in here -from CR 15 Bonny Prince Andus and his 4 subcaptains to two more lords and their subcaptains, we get quite an array of different pirates to shake up and change the dynamics of these places. While build-wise, these being are not particularly complex, we at least get them spiced up with magi and even a multiclass duelist – though personally, I wouldn’t have minded a gunslinger here as well.

The Pirate Coast is a truly intriguing place, culturally – once inhabited by Stone Giants and riddled with their monuments, nowadays the colonial sea people (white-skinned travelers that arrived from over the sea), the Bull-god-worshipping, island-dwelling Bucranians and the xenophobic, mechanically savvy yet emotionally crippled “Last Men” weave a cultural panorama somewhere between memories of Mu, Crete’s lore and late colonial anarchy – and yes, elven and dwarven ethnicities are also covered here and rumor-tables offer additional incentives for adventuring.

Now unlike regular adventures, herein we get an array of locales, depicted in sufficient detail for DMs to develop or run as sidetreks – and oh boy do some of them breathe imagination and panache: Take the little valley and its shallows, where dinosaur ghosts manifest and a temple left by the ancient elves hides not only a deadly portal into annihilation, but also a boon if the PCs manage to solve the complex’s weird riddles. Or what about a sword guarded by energy-drain-causing swarms of deadly butterflies and their mindless zombie slaves, perhaps all following the commands of green slime hiding in the hearth…or some other being that has crafted this strange micro-ecosystem…

Death awaits foolish adventurers disturbing sealed away pit fiends and a valley that is often visited by the lord of all horses may also see potential problems if the adventurers lay their hands on his centaurs or equine servants. Covens of hags, clouds that cover you in gold, served by oblivion wraiths, goblin tribes, lonely cambions, strange dwarves led by an opal-eyed “seer”, granite cliffs hiding the mansions of stone giants left behind from ages long gone, giant beaver-dams, a neutral sect of hermit monks, ritual sites of alien, long-forgotten gods from the outer dark – and even Zarathustrans, monks that believe they have transcended humanity  -all of these and so much more can be found within these pages. Fur-traders, seal-headed humanoids, oracles of the woods,, a windswept plain where the spirits of the 4 Black Winds may be conjured forth, a fully mapped mini-dungeon, an alchemist who grows obedient women in vats, hunting grounds of killer squirrels, a wood-craver that can create doppelgänger made of wood, a bored goddess of fortunae, trbes of warrior-nymphs, rainbow-crows guarding divine fire… There is fodder for weeks upon weeks of adventure herein.

Editing and formatting are good, though by far not perfect – I noticed minor inconsistencies here and there, double letters etc. Layout adheres to a printer-friendly two-column full-color standard and the pdf comes fully bookmarked for your convenience.

Author John M. Stater and PFRPG-conversion chief Skeeter Green have delivered us a supplement that brims with raw ideas – so many in fact, that I wager you could easily spin a whole campaign around the ideas herein. Skeeter Green has learned from part 4 and this installment of Hex Crawl Chronicles offers more variety – alchemists, magi etc. make for more versatile builds than in the previous installment and statblock-wise, we get a lot of material, though personally, I’d upgrade the magical items of most beings herein, especially of the high-level NPCs. That being said, you won’t buy this for the statblocks – you buy this for the IDEAS.

Whether to supplement Skull & Shackles or Savage Tide with free-form wilderness (h)exploration or to add to Freeport or Razor Coast, this mini-setting (for that it is) brims with more awesome ideas that almost demand being made into an adventure than some campaign settings I’ve read. With a touch for blending familiar and lien, we are taken on a ride into realms both wondrous and distinct, where piratey coolness and a sense of Sword & Sorcery rawness mix and foolish PCs might meet their demise by annoying the wrong hermit. Now all great? Almost. For a supplement about pirate coasts, there is a distinct lack of storm/seas phenomena & ship-combat and the like and no stats for legendary pirate ships can be found in these pages – which is a bit of a pity. Still, I can’t find it inside me to rate this down for its flaws – it offers too many good ideas and an just about unbeatable bang-for-buck ratio; This could literally be 1/2 a year of diligent roleplaying! Half a year spent with fun, wonder and excitement and the thrill of very old-schoolish danger. Final verdict? In spite of the flaws, 4.5 stars, rounded up to 5 for the purpose of this platform.

You can get this cool sandbox for the PFRPG-rules here on OBS and here on d20pfsrd.com’s shop.

Alternatively, old-school aficionados may get it for the S&W-rules here on OBS and here on d20pfsrd.com’s shop!