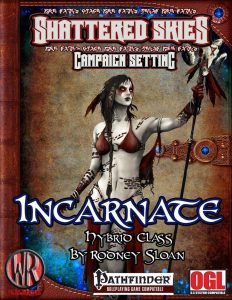 This hybrid class clocks in at 15 pages, 1 page front cover, 1 page editorial, 2 pages of SRD, 1 page back cover, leaving us with 10 pages of content, so let’s take a look!

The incarnate is a hybrid of oracle and barbarian and receives d12 HD as well as 4 + Int skills per level and proficiency with simple and martial weapons, as well as light and medium armor and shields, excluding tower shields. Incarnates draw spells from the cleric spell list, which are first gained at 4th level. The spellcasting is spontaneous and governed by Charisma. They don’t require a divine focus and may not swap mystery or cure/inflict spells when leveling up – as a minor complaint, these spell-references have not been italicized. Spellcasting caps at 4th level, just fyi. The class gets full BAB-progression and good Fort-saves.

2nd level provides uncanny dodge, 5th improved uncanny dodge and 7th level yields DR 1/-, which increases by +1 at 10th level and every 3 levels thereafter. The incarnate begins play with fast movement and the oracle’s curse – this sports an ambiguity: As oracle curse progression is usually tied to to levels, with non-oracle levels and HD counting as 1/2 levels, so it’s not 100% clear whether incarnate levels are treated as oracle levels or as other levels for the purpose of this ability. 14th level nets a +4 bonus to Will-saves versus enchantment spells (but RAW, not abilities) while soulraging.

What is soulraging? Well, it is one of the defining features of this hybrid class: 4 + Constitution modifier rounds per day, +2 rounds for every level first level. While in soulrage, the character receives a +4 profane bonus to Str and Con (interesting bonus type choice) and a +2 morale bonus to Will-saves, but -2 to AC. The ability gets temporary hit point increase etc. right. Unlike a barb’s rage, soulrage does not hamper skills that require concentration and incarnate spells (and only them – kudos!) can be cast while in soulrage. Soulrage btw. qualifies as rage for the purpose of feats and prerequisites. Analogue to the barbarian, 11th level provides an upgrade of the bonuses to +6/+3, respectively, with 17th level providing the tireless and 20th level the big +8/+4 upgrades.

However, soulrage, starting at 11th level, does allow for a unique trick: Upon entering soulrage, you can apply the effects of a cleric or mystery spell of 2nd level or lower to herself, with the limitation of requiring a range of touch or personal – and the use still consumes the spell slot. If the duration exceeds 1 round, it lasts for the whole soulrage, which is the aspect I consider most problematic here, as there are spells with durations that are significantly lower for a reason. The capstone eliminates the 2nd-level restriction, just fyi.

The second defining feature of this hybrid class would be its mysteries – chosen at first level, these act pretty much as you’d expect them to, but they are distinct from those of the standard oracle. The mysteries add 3 skills to the list of class skills and grant mystery bonus spells at 7th level and every 3 level thereafter, up to the 16th. As a minor complaint: The mystery base ability’s wording mentions a spell gained at 4th level and the spell-progression mentioned in the base ability directly contradicts that of the mysteries themselves and the table – I assume that the latter are correct. Still, this is a pretty nasty hiccup that should have been caught. A total of 10 different mysteries are detailed herein, focusing mostly on a nature theme. The respective mysteries govern the precise abilities gained at 1st level, 4th level and every 4 levels thereafter, providing a linear ability progression in the revelations gained – in short, they behave a bit more like bloodlines than mysteries. Where appropriate, they are governed by Charisma, just fyi.

To give you a brief run-down of the mysteries: Battle provides expanded proficiencies – all martial AND exotic weapons (!!) – but the latter only while raging. 4th levels yields a high-range chant that provides minor bonuses to allies – and lacks an activation action, duration or what it takes to maintain it. We can also find better AoOs into threatened areas and, at high-levels DR based on stoneskin, replacing your regular DR…which may, in some situations, be a minor drawback, as stoneskin has a fixed cap of preventable damage AND revelation powers only work while soulraging. on a cosmetic side, the two highest level ability names have not been properly italicized.

The Bones mystery nets you an armor bonus-granting (and later also DR-granting) bones-armor while soulraging (COOL!) – but does the “last after soulrage ends”-timer rest upon reentering soulrage? the ability-interaction here is a bit wonky. Adding bleeding wounds to negative damage is nice, but if you don’t take an inflict spell, you’re locked out of the benefit until you gain the follow-up revelation power, since RAW, the incarnate does not have the spontaneous spell-conversion. High-level abilities here net you undead to fight beside you and a negative energy touch. Once again, action-economy is not always as clear as it should be – something that extends to quite a few abilities throughout the mysteries, mind you.

The respective mysteries also influence the capstone, mind you, with each granting a form of Apotheosis that is sufficiently strong – and the small rules interaction glitches herein do accumulate, unfortunately: I like e.g. a power word: kill 1/day, with hit point limit increased to 150, but I *think* it probably was intended to be a SP and thus codified. There is a cool heat aura in the flame mystery that causes damage and grants concealment with limited daily uses, fire breath, etc. – as a minor complaint, a couple of these should probably refer to class levels, not levels “Heavans”([sic!] – that typo is the header…) provides some cool star-based defensive and offensive options – including a nice idea to represent the dweller in dark via spells.

The life mystery nets channel energy while in soulrage. RAW, however, only damage healed and caused is used for the calculation, which means that daily uses are locked. That being said, transformation into a being of life is a pretty cool visual! (And yes, I can poke some minor holes in this one as well, but by now you get the idea.) The Lore mystery suddenly mentions a patron that the class does not have and focuses on violently probing the mind of others, representing the war-scholar type of trope. Nature has abilities that stabilize you via temporary fast healing and the option at higher levels to leech hit points (should be negative energy damage, imho) and gain temporary hit points. This would btw. be a place to mention an issue in rules-interaction: Several revelation powers duplicate spells as accompanying effects upon entering soulrage. However, these include summons, which I assume will vanish – still a ruling on duration-interactions would be fitting here. Stone provides reflexive weapon damage, stability and the like. Waves include cold damage and slow on critical hits, while wind e.g. adds stagger effects to crits. That may be a personal thing, but I’m not the biggest fan of such save-less crit-fishing boons, but that will not enter into the considerations of the final verdict. Still: Limited use long-range thunderclaps and the like are pretty cool!

Editing and formatting are much better than usual for Wayward Rogues Publishing’s offerings: While there are glitches in formatting, there are less than in previous classes. From a rules-language point of view, the class is mostly solid in its base-chassis, with only the interaction of revelation powers not always being perfect. If you’re willing to make a few calls, though, the class remains pretty functional. Layout adheres to Wayward Rogue’s 2-column full-color standard and the pdf sports a blend of really nice, original artworks and a few stock pieces. The pdf doesn’t have bookmarks, which is an annoying comfort detriment. Furthermore, the pdf does not allow you to select, search of copy text, which is extremely annoying and a pretty big comfort detriment. If you want to extract information for your char-sheet, you have to do so by hand.

Rodney Sloan’s incarnate ranks among the better of hybrid classes I covered from the Wayward Rogues. For one, while it does not have a potent leitmotif in the traditional sense, it does play in a pretty unique way, somewhat akin to a paladin/barb with oracle sprinkled in. Now, balance-wise, I am not 100% sold on all decisions, partially due to the minor ambiguities found herein. That being said, the linear mysteries provide distinct playstyles, which is a plus. On the downside, there is, apart from mystery choice, no player agenda here – you get this one choice and that’s it. Still, while not perfect, I can see this class being fun for some groups, making this a quintessential mixed bag, slightly dragged down by the editing and comfort-issues. Hence, my final verdict will clock in at 2.5 stars, rounded up due to in dubio pro reo.