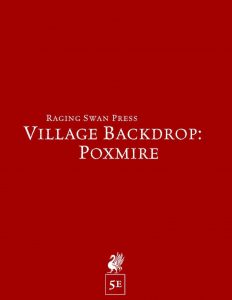 5 miles of the main land, there is a small island, and few go there nowadays; if the charming name was not ample indication – this is a colony of the sick, of the quarantined, and from it, an autocracy rose, one that supports smuggling and piracy, and one that few guardsmen or tax collectors will be willing to visit – for obvious reasons. Of course, disease cults would also thrive potentially in such an environment…so who better to send here than expendable adventurers?

This set up is gold. The lore and rumors circulating about this place enforce the angle, and from appearance to dressing and nomenclature, we get the usual, detailed information for PCs doing their legwork. Guards do exist to prevent escape, but obviously those stationed here aren’t exactly nice fellows – having to manage the wards comes with a certain harshness as a requirement. The pdf presents a 20-entry dressing/event table to render the village’s squalor more dynamic. 2 detailed NPC write-ups are included, both, as usual, in the personality/mannerism/fluff-centric style of Raging Swan Press, and the governor’s mansion comes with its own 6-entry subtable of events

As has become custom, we do get information on the surrounding locality, and each of the 8 keyed locales comes with a sentence or two of read-aloud text. A total of 4 further suggested quest-angles are included as well, adding further use to the settlement.

If there is anything to complain about here, it pertains the way in which this uses PFRPG – it basically doesn’t. There is no settlement statblock, there is no marketplace section, and we don’t even get disease stats or the like. With a tiny bit more effort in this regard, this could have been an outstanding offering, with its quasi tropical plague colony vibe.

Mike Welham knows what he’s doing – he’s a veteran and one of the authors who always make me excited when I see their names on anything. Poxmire rocks with its atmosphere somewhere between a Caribbean plague colony, a pirate’s nest and a proximity to the mainland that reminded me of Venice. The set-up and execution are glorious, but as far as integration into the system is concerned, this could have done better. My final verdict can’t exceed 4.5 stars, rounded down.

You can get this neat settlement here on OBS!

If you’re enjoying my reviews, consider leaving a donation, or joining my patreon. thank you.