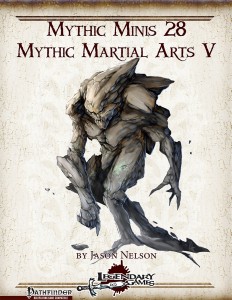 -Earth Child Style: +1/2 mythic tier to AC versus giants, also as a bonus to ref-save versus just about anything they can hit you with. Use mythic power to enter it reflexively. DAMN cool – adds a whole new dimension to the style!

-Earth Child Binder: Use combat maneuvers regardless of size versus giants, plus add stunning fist to AoOs sans expending it. Stunning Fist also applies to all attacks versus giants, making stun-locking them very much possible. Nice!

-Earth Child Topple: Trip giants into other foes (potentially with maneuver effects that benefit from tripped foe’s size!) and use mythic power to add combat maneuver to crits vs. giants. Cool!

-Kirin Style: Higher mythic tier based bonus and faster creature identification. Not much to work with, solid for what the base feat does.

-Kirin Path: Take 20 to identify creatures a tier-based number of times per day; Also: Move through threatened squares of identified creatures after executing AoOs – not much to work with, but oh boy, here we get some pretty awesome tactical options. Nice, especially in light of the base feat!

-Snapping Turtle Clutch: No penalty to grapple maneuvers versus foes who attack and miss you, alternatively disarm manufactured weapons; Even cooler: Counter the grab quality via mythic power and a special defensive CMB, potentially reversing the grapple. I’m usually not a fan of competing attack rolls/checks, but for what it’s worth, CMB versus atk is bearable. I like using mythic power to counter grapple, but still think that versus foe’s CMD would have been the more organic solution.

Jason Nelson’s take on mythic martial arts is…surprisingly awesome. The Earth Child-feats brim with cool ideas, even the Kirin Style, which I don’t particularly like, receives something nice. And while I am loathe to see d20 vs. d20 (plus modifiers, but still) in the Snapping Turtle tree, the overall feats can be considered well-crafted. Since all my gripes boil down to personal preference and in a minor case, rules aesthetics, I can’t help but rate this highly – my only true gripe remains beyond the d20 vs. d20-instance in one feat the fact that 2 of the Kirin Style’s feats could have used some unique tricks. This is nitpicking at a high level, though, hence my review will clock in at 4.5 stars, rounded up to 5 for the purpose of this platform.

You can get this cool array of mythic martial arts here on OBS and here on d20pfsrd.com’s shop!