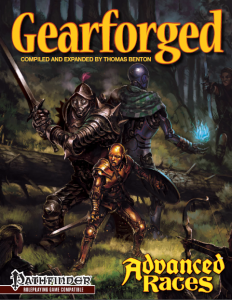 The third installment in the Advanced Races-series is 26 pages long, 1 page front cover, 1 page editorial/ToC, 1 page SRD and 1 page advertisement, leaving us with 22 pages of content, so let’s take a look, shall we?

Now the story of Gearforged has been told by multiple supplements and could be pieced together from various Midgard-themed sources, but herein we have the story well-compiled and much like the spread content, this pdf offers also fluff-wise the easiest way of getting the whole story of the creation of the Gearforged – from Stross-tyranny to the Free City of Zobeck’s revolution to how Rava (a mask of Ariadne) and her church have guided and shaped Gearforged society, while also going into details on Gearforged psychology and iconic concepts like memory gears, soul gems and everwound springs as well as Rava’s write-up. Also rather awesome would be the schematic insights into the anatomy of Gearforged, marvelously illustrated in gorgeous full color by Mark Smylie.

Of course, this pdf offers a significant array of traits – a total of 12 different racial traits are provided for your perusal: From a 1/day discharge of 1d4 fire/electricity or sonic damage à la burning hands to confusing foes by linking via touch with their minds, these traits…are actually fun! I mean it! They’re not too strong, but confer significant bonuses and make for thematically fitting, intriguing additions to characters that may well make the difference between triumph or doom. Only rarely do I see traits I enjoy as much as these, so kudos! Especially since 5 racial subtypes with assigned traits add also a sense of narrative gravitas to the selection of these traits – I wish more supplements tied story/setting-information that concisely together. And of course, the cool incantation/ritual to turn into a Gearforged is depicted herein as well in all its glory.

But what do Gearforged characters get crunch-wise? Well, they are medium, get +2 to an ability score of their choice, +1 natural armor, suffer no penalty from wearing medium armor, get low-light and darkvision and also the Gearforged traits – these include +4 to saves versus mind-influencing effects, immunity to nonlethal damage, disease, death effects, necromancy effects, poison and sleep as well as exhaustion and fatigue. Furthermore, they automatically stabilize at 0 Hp or less and are not subject to massive damage death. Even upon complete destruction of the base bdy, as long as the memory gears and soul stone are intact, the Gearforged can be recreated. They also don’t need to eat, sleep or breathe and may work properly under water for str-score hours – any longer than that immobilizes them unless they have been repaired. Gearforged incur a -2 penalty on swim-checks.

Gearforged cannot heal damage naturally, and even magic only cures the minimum amount of damage. The psionic repair power (nice to see the inclusion!) works normally, though. Gearforged require 4 hours of daily maintenance by themselves – failing to get this period of uninterrupted rest results in cumulative penalties of – 2 to atk, skill-checks, ability-checks and saves and after character level periods sans maintenance, the Gearforged become immobile, requiring outside help to reactivate. They also get +2 to intimidate and Craft (clockworks). All in all, an interesting race – the vast array of immunities is somewhat offset by the impeded healing capabilities of the class – though the question of type remains: While I assume from the fact that they get their own subtype that the Gearforged count as humanoids for the purpose of spells and the like, not as constructs, it would have been nice to have that spelled out properly. Now we also get an array of archetypes, first of which would be the Clockwork Warrior for the Fighter-class: Learning to utilize gears to supplement his/her/its attacks, developing natural claw-attacks and similar tricks in lieu of armor/weapon training. is nice, though we have a formatting glitch here, with one ability’s name not properly in bold. The Faithforged are created paladins, who do not get spells, instead focusing on lay on hands (also on gearforged!) and the option to infuse attacks with elemental bonus damage dependant on level instead of mercies and divine grace. As soon as the Faithforged learn to channel they’re rather hard to pin down, for their symbol is their own very being. The high-level abilities are also quite unique – kudos for an uncommon, interesting archetype here. The Heavy Gauntlet Witch gets a permanent adamantine gauntlet enhancement to their physical form, enhancing their physical forms with DRs and even fortification. Furthermore, their pain clasp overrides construct immunity and even, in one check, grapple and make paralyzed foes prone and get a reach. An ok archetype, I guess, though it annoys me a bit that it does not specify which abilities the respective powers replace/change – yes, it’s a variation of the gauntlet witch archetype from KQ’s issue #23, but still – the information should have been in this pdf.

Next up would be the Lawmaster inquisitor – unable to cast [chaotic]-spells, these inquisitors are specialists of intimidation and they make for superb guards, being able to make relatively easy DC 20-perception checks to discern the invisible, ethereal and later even discern the true form of polymorphed creatures and objects. At high level, regeneration and marks of justice as well as a type of imprisonment are added to their arsenal. rather neat! Barbarian gearforged seem like a contradiction in adjecto, but the Quiet Explorer gets a changed rage-quality as well as the ability to retaliate at higher levels, punishing opponents with AoOs. Summoners of the Gearforged race may opt for the path of Salvager – their summoning spells may be restricted, but do add the new scrap beast mini-template to their summons, making them vulnerable to electricity in favor of +2 AC. Also rather interesting, the archetype gets a flying metal sphere weak to electricity (no offsetting the weakness via evolutions!) that can learn to turn into a swarm-form which may later learn to split, throw swarmed foes and as a capstone disarm and destroy items to have the swarm heal itself.

The final new archetype would be the Tinker Alchemist – faster maintenance (only 2 hours, later none at all), exclusive mutagens for Gearforged, bombs automatically enhanced by the breath weapon discovery and may choose energy to be resistant against and even be healed by said energy make up this archetype’s arsenal. Among the new items, we get a claw whip, a polish to dazzle foes and a gear buggy vehicle as well as an amulet that may grow spider-like bludgeoning appendages, anti-construct bombs, a kind of battery (to heal and offset maintenance) and finally, bells to interact with destroyed Gearforged.

We also get 16 new feats herein – improved armor, better underwater adaption, counting as both former race and Gearforged, better skill at dismantling constructs, DR/fire, having an integrated masterwork item usable only for you, more beautiful appearance, less penalties for failing to get maintenance, reflexively magnetically disarming foes 3/day, self-repair and even making a limb autonomous 1/day, the feats per se are rather neat – especially the autonomous limb has quite some potential! Speaking of potential, the 5 spells have some cool ideas, but unfortunately, also flaws – take the first spell. It includes this sentence “While encased, use your touch AC for all AC checks.” I have no idea what AC-checks are supposed to be. Also: usually, touch AC is worse than regular AC, so why is this an improvement? Per se the spell offers temporary hit points, which is nice, but I still don’t get how this one is supposed to work. Dazzling (and int-damaging) foes via bursts at 4th spell level may be nice, but also a bit weak. You can also transform your metal frame into bone, take on inevitable-like aspects or charge your unarmed strikes with electricity damage.

This does include options for non-Gearforged characters as well, though:

Oracles may now opt for the Clockwork and Industry Oracle-mysteries (both of which are AWESOME, the latter allowing you, if you choose to, to wilder in gunslinging!) and the sorceror may now opt for the mechanical sorceror bloodline and we also get information on the Craft (Clockwork)-skill, Disable Device when interacting with clockwork devices and Knowledge (Architecture and Engineering) as well as Use Magic Device. on another note, if you require some inspiration to expand the Craft (Clockwork)-skill, Storm Bunny Studios has a nice supplement out there that could be well used to supplement this pdf. Finally, we get 3 non-Gearforged clockwork-related traits.

Editing and formatting are very good, though not perfect – I noticed minor glitches here and there as well as some minor rules ambiguities. Layout adheres to Midgrad’s drop-dead gorgeous 2-column full-color standard and the artworks are ridiculously beautiful for this price – James Keegan, Chris McFann and Mark Smylie all did splendid jobs here. The pdf comes fully bookmarked for your convenience.

The Gearforged have a hard standing with me – I’ve read MANY construct-races, with varying degrees of being constructy/human-like and just as many solutions for the obvious problems the immunities bring. Now fluff-wise, the Gearforged are my favorite construct-race, but crunch-wise…not so much. I’m not really sold on their balance. Where e.g. Darakhul, who get a similar amount of immunities/benefits have to contend with multiple drawbacks that balance out their powers, Gearforged only get penalties like the maintenance-requirement that can be mitigated and even bought off with significantly less feat-investment than the Darakhul. Furthermore, their immunities are rather significant and the absence of an age, height and WEIGHT-table is unfortunate – I can already see the discussions on whether the gearforged crashes through those ice sheets, branches etc. in my head….

That being said, the options contained herein more often hit the spot than miss it – Designers Wolfgang Baur, Morgan Boehringer, Chris Harris, Adam Roy, Jason Sonia and the mastermind of this pdf Thomas Benton have crafted some rather ingenious pieces of content that should, even for other construct-races, allow for significant amounts of scavenging. Idea-wise, this is definitely a rich, if not perfect offering, a bit on the stronger side balance-wise and with minor glitches here and there, but still a well-worth purchase. Hence, my final verdict will clock in at a solid 3.5 stars, rounded up to 4 for the purpose of this platform.

You can turn clockwork here on OBS!