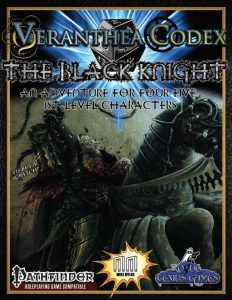 The second version of this module clocks in at 29 pages, 1 page front cover, 1 page editorial/ToC, 1 page SRD, 2 pages of advertisement, leaving us with 24 pages of content, so let’s take a look!

It should be noted that 6 level 1 pregens, making use of the unique Veranthea rules for races and characters, are included in the deal…and they are all pretty strong, which is probably a good thing, considering what awaits the PCs herein.

This pdf is intended as an introduction to the continent of Grethadnis in Veranthea and can be used as the first module, which, in combination with Spring of Disorder and Grualroth’s Rot, to form a sequence of modules. Assuming character creation, the pdf sports 7 sample campaign traits to invest the characters more within the world of Grethadnis and provides two hooks that can act as shadows of the things to come.

The module begins in Yawvil’s Realm and sports two fully-statted, depicted villages for your convenience – generally, the region is considered to be rather peaceful, but the pdf does provide information on random encounters. Three minor, sample quests can be found here – from e.g. defeating a shadow to putting their weight behind one side of a power-struggle, these sketches are okay as supplemental material.

But you want to know about the module, right? All right, but from here on, the SPOILERS reign. Potential players may want to jump to the conclusion.

Only GMs left? All right! We begin this module on the Great Road throughout the realm of Veranthea’s powerful arch-wizard, with an encounter of PCs meeting the Vyrystavyas gypsies – invited for a friendly gaming bout, things turn strange fast: The gypsies unwittingly carried a new artifact the Polysabie, a magical d20 – upon being completed, the roll sports some rather odd effects: Whether it’s that a given area believes you’re a warlock/witch, being compelled to craft wooden animals when trying to infiltrate structures or being stunned when hearing “her ring” or that you may cause misfortune to grant yourself a bonus…the effects are diverse, but on the nasty side. Worse: Upon having rolled the artifact, it becomes HEAVY…and, as panicked gypsies are sure to tell the PCs: An unstoppable Black Knight manifests. (And yes, in order to destroy the artifact, they will need to trek it through all continents, as this one tends to disappear when the black knight is defeated…)

If you haven’t noticed that by now: Yes, the Black Knight pretty much is a unique monster and sports rather Monty Python-ish, obvious abilities – with limbs falling off and insults as well as a glare that may stop you dead in your tracks, the inhuman knight is lethal at CR 3. (And yes, the headbutt is BRUTAL – don’t underestimate a limbless black knight!)

Defeating the Black Knight, space warps and rips the PCs to the continent of Urethiel, the domain of His Golden Personage of Fortitude, to be precise. Welcomed by pig farmers has been suffering from bandits (which turn out to be cunning ratfolk). Having defeated these scoundrels, the PCs return…to find another Polysabie-roll in process…and an even stronger Black Knight waiting for them, one with completely different abilities (and CR 4…)

…and, once again, the fabric of space and time tear asunder…and bring the PCs to Trectoyri – or rather, the Free Isle, where a knight’s tournament is in process – thankfully, Lord Agresta (a nod to Lou Agresta, perhaps?) notes that the games must go on, the polysabie found and the Black Knight defeated. Unbeknown to the PCs, a doppelganger has acquired the lethal artifact and may well try to infiltrate the PC’s group…and, once again, a new iteration of the Black Knight, more powerful than before and with a unique build (and a chainsaw sword) needs to be bested – this time at CR 5. Beating this lethal foe (with actually rather challenging damage-output that may well instakill a PC…), the polysabie’s power is broken, space rips asunder one final time and the PCs are ready to tackle the aforementioned, excellent Spring of Disorder module…after all, the PCs have coincidentally been dropped right in the vicinity.

In the revised edition, the battle maps for the respective encounters come with detailed terrain feature explanations that are included in the back, in their appendix of sorts, adding a more tactical dimension to the proceedings, which helps the boss battles, the main focus of the module.

Editing and formatting are very good. Layout adheres to Veranthea Codex’s two-column standards, which cram a LOT of text on one given page and look pretty busy, but also manage to depict a lot of content per page, with each continent having its own unique, visual style. Artworks are solid and in color. The pdf comes fully bookmarked for your convenience. The cartography is in full-color and okay – not beautiful, but player-friendly.

Mike Myler’s Black Knight is a pretty awesome idea as such and works well for convention games or as a means to introduce new players to Veranthea. The idea of the Black Knight and Polysabie per se are gold – they could have been lame, but ended up being rather cool. However, not everything about this module is great – basically, the story is a very thinly-veiled pretense for granting an impression of the continents, so expect no narrative feats here.

Similarly, there is basically nothing interesting going on beyond the iterations of the Black Knight – the other encounters and things to do herein basically can be considered to be…filler or minimalist window dressing…but the inclusion of battle maps and cartography helps make the respective encounters feel actually more relevant.

This, however, does not change that basically, this book has one cool item/pretense for the journey, 3 great adversaries…and is, bar that, a non-entity of a module. The revision does help offset that with notes on terrain, adding at least a bit of environmental tactics to the sequence of boss battles against the knight, which are btw. really well-made and cool…and lethal as all hell.

Whether or not this module is for you, depends pretty much on if you consider three cool Black Knight builds and the polysabie enough to carry the brief module – Veranthea as a setting is great, but the “tour the continents”-facet didn’t really work out too well for me. The continents don’t get to shine due to the module’s brevity, their distinct characteristics touched upon at best in a cursory manner.

Due to the brevity of this module, none of the continents have much time and space to grow on the PCs, to provide anything beyond the most rudimentary of glimpses of what they are about – basically, this is a set-up for a big module, cut down to the bare skeleton. What we have here are challenging, really cool encounters, trapped in a non-entity of a module.

The black knight and artifact are nice…but on their own, they don’t manage to make this a truly great module. This can be a ton of fun…or end up being a huge dud of a module. Running this with kids that do not know Monty Python, for example, did not work as well, while nostalgia can make this fun for an adult group. In the end, though, I have to rate this as a module, and here it has issues that, alas, remain in the revised version, which remains pretty much structurally unchanged.

My final verdict will clock in at 3.5 stars – if you can live with its barebones pretense of a story…but I will round down for the revised version as well. If the idea of 3 hard boss fights in sequence does not excite you or isn’t enough for you to consider this worthwhile, then detract a star and steer clear. If fighting Monty Python’s black knight with chainsaw swords sounds fun to you, particularly if you’re looking for something you can easily run in a con-environment, this may be worth checking out.