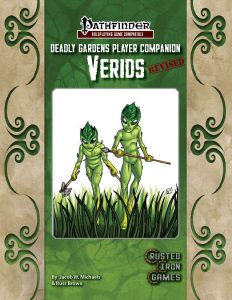 The revised version of the first player-centric Deadly Garden-installment clocks in at 11 pages, 1 page front cover, 1 page SRD, leaving us with 9 pages of content, so let’s take a look!

Verids are, as you may have surmised, a new plat-race intended for use as PCs – originally of extraterrestrial origin, they have several unique spins on the established tropes: Beyond looking a bit like plant-like versions of gray men, they seem to have a grudging respect for dwarves (!!!) for their mining prowess, but consider other races to be deviations from the natural order. While personally, I like this spin on the tropes and a GM could rationalize it by them having a somewhat odd or skewed perspective on “natural order”, the fact remains that dwarves, in most campaigns tend to hearken closer to the tropes of scions of civilization and industry, so that may be something to look out for.

Racial trait-wise, they get +2 Int and Con, -2 Str, are Small, have a slow speed, get +2 natural AC, and require the sun as nourishment – failure to spend 4 hours in the sun results in decreased natural healing. 3/day, they can, as a swift action, extend their arms by 5 feet, increasing reach for 1 round. Additionally, they replace animal companions with plant companions (and the Deadly Gardener feat that helps there as a bonus feat) and can, Con-mod times per day (minimum 1) release a 10-foot spore burst as a standard action. This burst sickens targets via a poison effect for 5 rounds on a failed save, with Con as a governing attribute for the save DC and an additional daily use gained at 4th level and every 4 levels after that. Additionally, they are plants with the sentient plant subtype (concisely defined here – and yes, they breathe, eat and sleep), gaining low-light vision and immunity to sleep effect as well as a bonus of +2 to saves versus paralysis, poison, polymorph, stunning and mid-affecting effects, excluding morale effects. This bonus increases by +1 at 5th level and every 5 levels thereafter. The race comes with a proper age, height and weight table.

Alternate racial trait-wise, there are thorny verids that lose the sunlight dependency and who can draw sustenance from grapple-based blood draining, but such verids need a steady supply of blood to work at full efficiency…which has its own creepy implications. Can you see the blood farms of our plant overlords, the red sprinklers? I can. *shudder* Such verids may also choose another racial trait to help them heal once they have taken care of the day’s blood sustenance requirement – and yep, that aspect cannot be kitten’d – kudos! Alternate spores that deal Con-damage are interesting and certain verids have defoliant spores that may affect plant creatures and negate plant-based difficult terrain. Cool! Instead of the stretchy arms, limited healing (again, abuse-proof) for immersion in freshwater can be gained. Verids may also replace their spores with 1/day goodberry and plant growth, provided they have Cha of 11+. Continual speak with plants can also be gained for stretchy arms, though the spell has not been properly italicized. Another alternative for the spores would be the option to make an unattended wooden object grow into a desired shape 1/day. As a minor complaint – this should specify its activation action. I assume standard action as a default.

So, next up would be the racial archetype, which this time around would be the terraformer kineticist. These guys get a modified class skill list and must choose earth, water or wood as primary element. At 1st level, the terraformer selects a ranger’s favored terrain, though the bonuses granted are only +1. Additional favored terrains are gained at 5th, 9th, 13th and 17th level and may be sued to increase the bonus, but only increase it by +1. This eliminates the basic utility talent granted by the kineticist’s primary element. Instead of gather power, the archetype gains the eponymous terraform ability. As a move action, a terraformer may transform natural vegetation and minerals into alien variants of their selves in a 20-foot burst for one round. While in this area, the terraformer reduces the burn cost of a blast wild talent by 1 – here’s I’d have appreciated the same (minimum 0)-caveat that many kineticist archetypes sport, but that’s cosmetic. If a terraformer instead spends 1 full-round action, the transformation instead lasts for 1 round per “level” – that should be “Class level”.

If the terraformer takes damage during terraforming, he must succeed a concentration check – but the DC-calculation is off: The DC mentions effective spell level of her kinetic blast – and the terraforming ability in itself does not have an effective spell level. If the terraformer loses concentration, he suffers 1 burn. At 5th level, when using one or more infusion with a blast, the terraformer reduces the combined burn cost by 1. If within a favored terrain, the terraformer instead reduces burn by the favored terrain’s bonus – +4 would e.g. reduce burn by a whopping 4! When also in an area terraformed, the burn cost is reduced by a further 1. Thankfully, this can’t reduce the burn cost below 0. The ability replaces infusion specialization. Starting at 6th level, the terraformer may accept burn when terraforming, increasing the radius by 10 feet per level for each point of burn, replacing internal buffer. Instead of supercharge, 11th level terraformers can reduce the total burn cost of a wild talent by 2, with 15th level increasing that to 3. All in all, a definite improvement over the original iteration that shows the influence of N. Jolly.

There are three different equipment pieces: The first would be an interstellar beacon that lets you use interplanetary teleport…and only costs 2,5 GP to create, which seems underpriced for such a cool, powerful option. Spore collectors allow verids to collect their spores as splash weapons – the item still does not specify that these collected spores still should be treated as the verid spores. Cool: The spore launcher, which can fire spores and low-weight alchemical items, has been codified as a proper simple weapon. Minor complaint – the text calls it pneumatic launcher instead of spore launcher, but that’s a cosmetic nitpick.

Feat-wise, the Deadly Gardener feat mentioned before has been reprinted for your convenience. We also get +4 daily spore uses and Horticultural Mimic adds Plant Shape I – III to your spell-list. Mi-Go Technologist lets you choose two Item Creation feats for which you’d qualify character level-wise. You may use Heal to create Mi-Go technology variants of these items, ignoring spellcasting requirements and reducing the cost to create to 75% of base price. Finally, Potent spores lets you increase you spore DC by a potent +4.

The pdf also sports 5 new spells, with verdiform and mass verdiform being very precise buffs: They allow the targets to become somewhat plant-y, specifying the type of natural attacks they net, note deviations from the default damage-die sizes of these attacks, etc. Kudos! Corrupt Plants makes plants poisonous and bloated (neat idea!) and Alien Landscape affects an area, temporarily shaping it into a verid-friendly iteration of nature, which penalizes non-verid casters. Cool: The landscape also changes atmosphere/air, suffocating targets potentially, but it now sports a caveat that specifies that you have enough time to hold your breath, preventing suffocation-abuse.

The pdf also features 5 of the aforementioned plant companions: Living topiary, mushzoom[sic!] (yes, that’s intentional – 50 ft. base speed!), ophidian vine, phantom fungus and shambler – these guys are powerful, but also pretty cool. Kudos for the bonus vine new to the revised edition! The pdf closes with a sample verid ranger 3 and a CR 6 verdiform shambling mound, including a cool full-color artwork for the mound.

Editing and formatting definitely show that N. Jolly has been brought on board for the revised edition – significantly more precise in all key aspects. Layout adheres to Rusted Iron Games’ two-column full-color standard and with nice full-color artworks. The pdf comes fully bookmarked for your convenience with detailed, nested bookmarks.

The verids, penned by Jacob W. Michaels and Russ Brown really deserved getting this revised edition and I applaud Rusted Iron Games for caring enough to polish these guys. Gone are the confusing interactions and hiccups…and beyond polish, we actually get quite a bit of new content herein! That is caring and I really enjoy it when I can write a positive review of a revised version. Better yet, the verids, while still a potent race, has been cured of boring and unnecessary feature-bloat and brought in line to conform to the power-level of the stronger PF-races. It should work sans issues for all but the most gritty/low-powered games now. This is how an improvement looks like! The revised version gets the full 5 stars – I certainly hope we’ll learn more about the alien landscapes these guys create in a future book!

You can get these cool, improved verids here on OBS!