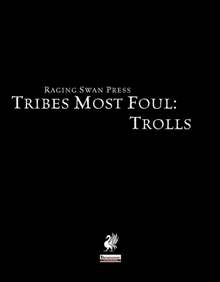 This installment of the Tribes Most Foul-series is 11 pages long, 1 page front cover, 1 page advertisement, 1 page editorial/ToC, 1 page SRD and 1 page back cover, leaving us with 6 pages of content, so let’s take a look, shall we?

As always with the series, we are introduced to 3 different tribes, all of which feature their unique tribal member rosters, society, background, tribal lore, sample NPCs (both fluff-only and with stats) as well as gorgeously illustrated crests.

What would the first be? The first tribe of trolls would be the Bigbila Djranjarra: In hushed, sunburnt forests they roam – troll shapechangers infected with a strain of lycanthropy based on the six seasons instead of the lunar cycle, turning into flesheating, ravenous huge ECHIDNAS. And yes, the sample creature comes with both regular and hybrid stats – and I may have just had a nerdgasm – the prose is SUPERB, the concept astounding, each word breathing pure creativity and awesomeness! WOW! After all those supplements I’ve seen, blowing me away is hard- this did it.

The second tribe would be the Crew of the Fallow Harvest – riding a windjammer (a flying vessel), these Troll-pirates of the skies have highjacked the cloud giant’s preferred means of transportation for their raids – oh, and we get stats for the vessel and stats of a damn TROLL NINJA. Cloud-riding troll pirates? WHAT? How awesome is that! It stands up to the first tribe! Impressive!

The Third tribe, then, would be the Fleshwearers – ruled by a matriarch, they have taken to using their regenerative properties to trade limbs – the newborn for example getting the limbs of mother to help them fend of adversaries – their successful pooling of resources, i.e. limbs, actually makes this tribe sport a decent amount of old trolls and beings with a higher life expectancy. Once again, a GLORIOUS idea! Statblock-wise, this time we get a venerable troll cleric.

Editing and formatting are top-notch, I didn’t notice any glitches. Layout adheres to RSP’s 2-column b/w-standard and the pdf comes fully bookmarked for your convenience. furthermore, we get two versions of the pdf, with one being crafted especially for screen-use and one optimized to be printed out.

Over the course of the last year, one thing has gradually become more and more undeniable – David Posener should be considered a force to be reckoned with – in this installment, he weaves a yarn so chock-full of imaginative awesomeness it almost hurts and sets the bar higher for any such installment in the series or competing products – not only is the prose a joy to read, the ideas actually supplement superbly the vast narrative potential within these pages, making for an overall stellar purchase – these trolls deserve your respect, your fear and if you’re like me, reading ANY of the 3 will make you immediately want to insert them into your campaign – one superb offering indeed, well worthy of the highest honors I can bestow – 5 stars + seal of approval and being a candidate for my top ten of 2013.

You can get these exceedingly awesome trolls here on OBS and here on d20pfsrd.com’s shop!