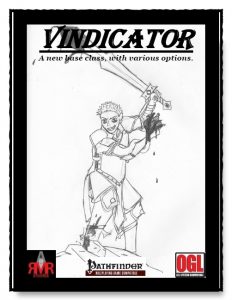 This base class clocks in at 11 pages, 1 page front cover, 1 page editorial, 3 pages of SRD, 1 page back cover, leaving us with 5 pages of content, so let’s take a look!

The vindicator presented here is a full-BAB-progression class with good Fort-saves that receives 4 + Int skills per level, has d12 HD and proficiency with all armor as well as simple and martial weapons, but not shields. The class receives Diehard at first level.

The eponymous vindication ability of the class can be activated 1/level, + an additional time per 3 levels after that and may be maintained up to class level + Constitution-modifier rounds, with activation and ending action being swift actions. (As a nitpick, the Con should be the full word, not the abbreviation.) Vindication reduces the maximum hit points of the vindicator by an amount equal to twice his level, but also nets the class a +2 bonus to attack and damage rolls with all natural and manufactured weapons.

Vindication also acts as a gateway of sorts for sacrifice: While the ability is in action, the vindicator can deal 1d4 non-reducible (nice catch!) damage to himself as a standard action to inflict twice the dealt amount to all creatures within a 15.-ft.-cone, with a Ref-save to halve it. Now usually, I’d complain about the lack of a damage-type, but I’m relatively okay with it here. The ability requires a free hand and increases by +1d4 for every 2 levels beyond first. It can be used 1/2 class level (minimum 1 caveat missing) + Constitution modifier times per day.

At 2nd level and every 2 levels thereafter, the vindicator receives a so-called ardor, which basically can be summed up as the talent-array of the class. The vinidcator may thus reduce his maximum hit points to create a weapon from his blood with scaling enhancement bonuses, which is cool visual-wise, but sports some typo-level glitches. Said weapon can then be used to inflict Con-governed bleed damage, fuse it with the sacrifice ability for a combo strike, increase the affected area of the sacrifice ability, become immune to fear or employ sacrifice faster a limited amount of times per day. At higher levels, stopping the aforementioned bleed can become pretty difficult and fortification is part of the higher level options as well, though it is not properly formatted.

Now a pretty problematic aspect of the class, in fact my main gripe with it, lies in the monstrous hand. You see, flavor-wise, this guy feels a bit like Guts, Ninja Gaiden Sigma 3, DMC 4, etc. in that he can wield larger weapons at higher levels in one hand – and per se, that is cool. However, at the same time, the monstrous hand is not really codified as a rules-entity…but several abilities do reference it in rules-language, referring precise to that hand, with negative levels. Now granted, there is an ardor that is called “monstrous ARM”, but how such a confusing and problematic hiccup could slip in this baffles me. So yes, the aspect of the class is functional, but more confusing than it should be….which is a pity, for, from reach to more creative options, it is not bad in the way it’s presented.

Beyond the ardors and their customization choices, the vindicator also receives better damage output and retained functionality at negative hit points (not being staggered when using Diehard, for example…), increased AC when wielding one-handed weapons, being resilient to bleeding damage…the class has some cool tricks.

The pdf also has a feat for extra vindication-uses and extra ardor and two favored class options, for dhampir and tiefling, to be precise.

Editing and formatting are the weak spots of this pdf – while not bad, there are formal hiccups (sentence suddenly switches to past tense) and some deviations from rules-language formatting and presentation. Layout adheres to a relatively printer-friendly two-column b/w-standard and the pdf has no bookmarks, but I can live with that at only 5 pages.

Angel “ARMR” Miranda’s Vindicator is actually one of my favorites of his designs I covered so far – it juggles some relatively complex concepts and its general HP-reduction engine is interesting and per se pretty well executed – not perfectly, mind you: If you roll really poorly on HP, this will not be fun. That being said, the class has some surprising and unique tricks that can make this a rewarding choice if you can get past the hiccups that exist herein. Now usually, I’d frankly rate this further down, but as a PWYW-offering, I consider it worth checking out – even if only for the purpose of mechanics/idea-scavenging, this could well make for at least an interesting adversary for the PCs to face. So yeah, this may be a flawed little class, but it does have heart and shows that the author cared. At PWYW, it is worth looking at and leaving a tip. My final verdict for the pdf will clock in at 3.5 stars – and this being PWYW, I’ll round up. As a non-PWYW-offering, I’d have detracted a star and rounded down instead, but yeah. Take a look – it’s worth that at least!

You can get this class for any price you consider fair here on OBS!