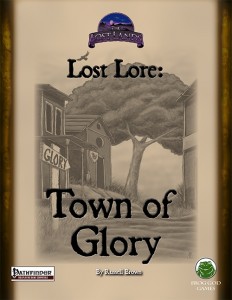 This little supplement clocks in at 14 pages, 1 page front cover, 1 page editorial, 1 page SRD, leaving us with 11 pages of content, so what is this?

Well, know how I love kingdom-building and consider Ultimate Campaign and they expansions released by Legendary Games pretty much one of the most awesome things ever? If you’ve been following my reviews, then this will come as no surprise. What may come as a surprise, though, is that I think that the kingdom-building-rules don’t work perfectly in the highest and lowest echelons – as recently commented on the boards, I’m waiting for a supplement to add the mythic element to kingdom building at the high end of things. Similarly, at the low end of things, their expanded scope may surpass and overshoot their target by a bit – and this is pretty much where this book comes in: Town-building instead of kingdom building, intended primarily for characters level 1 – 8.

The cleverness of this pdf is pretty much readily apparent from the get-go – the sample town would be called glory and the pdf even sports a little box that awards stewardship over the town – and it is said town that features in the illustrating examples throughout this pdf. Towns have statistics: population, Food, Goods, Trade and Defense…oh, and the presence of skilled NPCs actually influences how a town fares, with an extensive list depicting for example the option of what you can do when you have a scholar on site. Similarly, a variety of spells and their actual uses for the town are detailed – nice to see such attention to detail here as well.

The math is rather simple and so is the system: Each week that passes represents a town turn, during which each player can make one standard town action. NPCs not assigned to buildings may construct buildings. NPCs may improve skills and population may fluctuate. Similarly, NPCs can be allocated to buildings to render them active for the following week.

In order to build a building, you consult its entry – prerequisite buildings and characters need to be fulfilled to construct it and not all characters can construct it, though once it has been completed these requirements can be ignored. Build points carry over between towns and the higher the skill involved in creation, the faster the building will be completed. Building-bonuses stack unless otherwise noted.

The town standard actions are diverse and you can also trade one in for 6 town swift actions; standard actions include, but are not limited to, leading NPCs, recovering from damage, operating buildings – the like. Swift town actions cover potion brewing, gathering information and similar, quicker tasks…and yes, helpful feats are discussed as well, as are free town actions like buying/selling, spellcasting and regular interaction. NPCs are not mindless, though, so certain shortcomings may influence their build priorities. Promoting unskilled laborers to skilled specialists is also covered. There is also a town growth check – a d20 with various modifiers that take death (and lack thereof) as well as resources into account – the higher you get, the better the benefits reaped.

The pdf also sports a simple, quick system for resolving how well the town fares against attacks: Enemy XP are tallied and divided by 100, rounded down – this is the Defense DC. To defend the town, roll 1d20, add defense and bonuses for unassigned soldiers – simple, easy to grasp and still leaves space for the PCs dealing with the bosses of the enemies. (We have to take the big guy down, if his value is added, the town will NOT prevail!)

Buildings are generally categorized in basic, intermediary and advanced buildings with correspondingly higher prerequisites and benefits. There is a slightly confusing type here, which produces two “town halls”-entries, one of which (the basic building) should clearly be “town walls.” Other than that, the building-array presented is surprisingly concise.

The pdf also sports 4 spells, mostly object/tool-related as well as 4 brief, solid feats, which, while not brilliant, all work.

Editing and formatting are top-notch – apart from the one unfortunate glitch mentioned above, I noticed nothing glaring. Layout adheres to Frog God Games’ two-column full-color standard and the pdf comes without interior artwork, but needs none. The pdf is fully bookmarked for your convenience.

Russell Brown’s town of glory is, in one word, as glorious as the title: Taking a cue from the genius downtime-system of Ultimate Campaign, this works in pretty much perfect conjunction with kingdom building at a lower level, though arguably, the system as presented here is perhaps even more streamlined. It’s quick, easy to grasp and yet detailed…and it allows for what I really wanted for quite a while: Effortless low-level stewardship with a more pronounced emphasis on the human element – the importance of specialists means that the death of such characters will resonate more…oh, and yes, this works perfectly in conjunction with PFRPG’s regular village statblocks, so feel free to start converting e.g. Raging Swan Press’ vast catalog of excellent sample villages.

Presentation is concise and detailed and if there is one thing I regret about this pdf, then it’s the size – I sincerely hope to see an expansion at some point…and since this is Frog God Games we’re talking about: A low-level campaign detailing PCs acting as stewards for such a town would imho make for a pretty legendary experience – there are no modules out there with precisely such a focus apart from “PCs kill threats to town” – PCs kill threats and build town/get attached to NPCs/preferably with a good NPC-dressing generator for specialists? Never seen that done for PFRPG. I really want to play this, particularly in the grim Lost Lands! Pretty please? *makes gooey eyes*

This pdf surprised me with its elegance, panache and style – in spite of the somewhat unfortunate Hall/Wall-hiccup, this is well worth a final verdict of 5 stars + seal of approval.