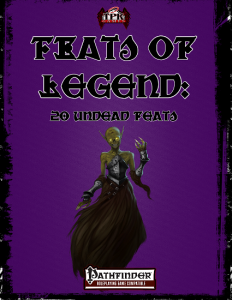 This installment of the Feats of Legend-series clocks in at 7 pages, 1 page front cover, 1 page editorial, 1 page SRD, leaving us with 4 pages of content, so let’s take a look!

This pdf begins with a handy table that sums up the feats with prereqs etc. and then dives straight into the feats, so what do they do?

-Boneyard Born: +1 DC for necromancy spells, +1 to all saves versus necromancy or death effects, can be qualified for via eldritch heritage and the undead bloodline. Odd, nonstandard formatting: A feat referred is italicized, something the pdf, confusingly continues to do.

-Dark Conduit: Adds your Con-mod to Cha-mod to determine the amount of healing you receive from any negative energy. I think this feat is a bit odd, to say the least – You don’t add Cha-mod to healing. UNLESS you’re talking about channel energy…but this feat extends to ALL types of negative energy, which includes spells and effects that do NOT add Cha-mod to the healing. Beyond the somewhat wonky 2-attributes-modifier to one effect (somewhat mitigated by the rarity of negative energy healed beings with both Cha and Con-score), the feat is odd and confusing, to say the least. Not gonna come near my table.

-Improved Dark Conduit: Resistance 5 vs. positive energy – quite cool, since we usually don’t see the like.

-Greater Dark Conduit: Whenever you kill a creature, you gain fast healing 2 for Charisma modifier rounds. (Charisma is not properly capitalized, as an editing nitpick.) Subsequent killings reset the timer. NOt a fan, since this can be kitten-cheesed for infinite healing, when a generous daily cap, HDx2+Cha-mod, for example, would have prevented basically infinite healing.

-Deathless Determination: You gain Resist Level Drain and auto-remove them after 24 hours. The prereqs of an undead bloodline and Diehard justifies the power of this feat. (And yes, again, you can qualify for this via Eldritch Heritage.)

-False Unlife: +10 to Disguise to seem undead, but you detect as evil undead of your HD when seen via detect evil. Interesting!

-Improved Grave-Touched: +4 to Fort-saves versus diseases, save versus poisons increases to +6. Can be taken via aforementioned Eldritch Heritage/undead bloodline-combo…which is odd, since the alternate prereqs imply that just having Edlritch Bloodline and an undead bloodline allows for the bypassing of the previous, non-improved iteration of the feat. Here, the special-line actually detracts from the functionality of the feat, since simply basing it on the initial feat would have done the job sans ambiguity.

-Greater Grave-Touched: Save-bonus versus diseases changes to +6, you gain immunity to undead-spread diseases like mummy rot as well as immunity to poisons. Again, this ´can be taken via aforementioned Eldritch Heritage/undead bloodline-combo…which is odd, since the alternate prereqs imply that just having Edlritch Bloodline and an undead bloodline allows for the bypassing of the previous, non-greater iteration of the feat.

-Scholar of Undeath: +5 to all lore-checks to identify undead and their abilities. You also increase the DC of your channel energy, command or Turn Undead by +2…which is pretty brutal, considering how channel already is powerful and has a scaling DC. Still, worthwhile and nice.

-Improved Scholar of Undeath: The base-feat’s bonus increases to +10 and the DC-increase to +3.

-Greater Scholar of Undeath: +2 to all saves versus Ex and SU abilities of undead and the DC-increase for channel et al. becomes +4. The whole feat-chain is interesting in concept, though I do consider the DC-increases rather massive. Personally, I consider the bonus extending beyond +2 to be too min-maxy – personally, I will add an Int-prereq to emphasize the scholar-angle the feats imply. (And, via MAD, decrease excess Channel-DC-stacking…)

-Hardened Flesh: Your AC is treated as +2 for the purpose of confirming critical hits and you gain DR 1/-.

-Improved Hardened Flesh: AC-bonus is treated as +4 instead for the critical hit confirmation. DR increases to DR 3/- – like these two feats!

-Reckless Revenant: You are immune to fear effects…which would be a bit much for one feat…but the prerequisite requires you having risen from the dead…which is rather cool. Sold -even more so, since it takes breath of life into account.

-Redeemed: Gain healing by positive energy, but also be damaged by negative energy as though you were alive. Can’t be combined with Dark Conduit. Nice one.

-Tongues of the Dead: Gain Necril as a language as well as +2 to Bluff, Intimidate, Diplomacy and Sense Motive when dealing with intelligent undead. Situational and okay, but not too exciting.

-Touch of the Undead: This feat: “Allows undead you command or control to deliver touch spells for you.” That’s the whole crunch text of the feat. All right, I’ll play: HOW? At what range? Do you have to transfer the touch held to the undead? As what action? Is there a maximum range? Can unintelligent undead hold charges? This feat is well-intentioned and flavorful, but horribly fails at its given task.

-Undead Avoidance: Gain +2 dodge bonus to AC versus undead. Losing Dex-bonus to AC deprives you of the benefits. Okay, I guess.

-Universal Recipient: Okay, we end on a nice one: Reduced DC for attaching necrografts and reduced Con damage for necrografting surgery.

Editing and formatting are per se solid, though people that are picky about the fonts used should know that the “o”s are slightly larger than other letters. There are a couple of faulty italicizations here as well. Layout is GORGEOUS – the pdf adheres to a two-column full-color standard with skulls on the borders and a greenish tint – this is a nice-looking pdf. The pdf sports a nice full-color artwork. The pdf comes fully bookmarked for your convenience.

Neal Litherland, Simon Muñoz and Brian Berg have crafted a book that sports some high-concept, intriguing feats – and indeed, there are some feats herein that are rather neat. You can justifiably call any content herein overpowered and it should make sense in most games, even the dark/low-fantasy-focused games. At the same time, there are a few pieces herein that don’t work as intended, which detracts from, unfortunately, some of the most interesting feats herein. In the end, this is a solid book with some rough edges and hence, my final verdict will clock in at 3 stars.