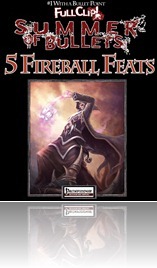 This Bullet point is 4 pages long, 1 page front cover, 1 page editorial/SRD, leaving us with 2 pages of content, so let’s check this out!

The feats herein all modify the fireball-spell like we’ve already had in some other BP-releases. The feats are:

Editing and formatting are top-notch, I didn’t notice any glitches. The layout adheres to SGG’S 3-column standard and the pdf has no bookmarks, but needs none at this length. Fireball is one of the most iconic spells in PFRPG and has been one for more editions than I care to list, thus any modification of it has to be crafted rather carefully and indeed, as could be expected, the pdf delivers some rather neat options to add to this favourite among destructive spells. All of the feats herein are neat and provide some kind of new tactical option beyond what one would expect of simple metamagic. That being said, I still feel like Implosion and Shockwave are rather similar in their mechanics and that the former’s name is rather unfortunate. Since all of the feats still can be considered winners and bring something new to the table, I’ll nevertheless settle for a final verdict of 5 stars – though I would have loved even more effects for environmental effects or a different implementation, perhaps an own Genius Guide: Misfit Studios’ Superior Fantasy Synergy had some (in my opinion) superior ideas there.

With a Bullet Point: 5 Fireball Feats (Full Clip!) is available from: