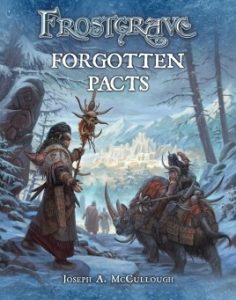 The third expansion-book for the wargaming/RPG-hybrid Frostgrave clocks in at 70 pages, minus 3 for editorial, etc., leaving us with 67 pages of raw content, so let’s take a look!

This book was moved up in my review-queue due to me receiving a physical copy of the book.

All right, so what is this one about? Well, forging pacts. D’UH. So how does this work? Well demons and similar entities have two names – the commonly used one and a true name. True names may never be bought, exchanged or traded, but can be received as treasure. Forging a pact requires at least level 10 as well as a Will-roll versus 18; on a failure, the wizard starts the next game at -1 health. On a success, the wizards notes having a demonic pact and the Demonic Servant spell. He also gains one sacrifice and one boon; sacrifices can be reductions of health, gold, less warband members (someone must stay behind, worship the entity) randomly lose one spell for the game or lose one action at the begin of the game, gaining only a move. The boons include options to mitigate the wounded optional rule, random demonic attributes, rerolls on treasure tables or a one-use bonus to an out-of-game spell, among others. getting a nasty chilopendra demon as one warband member is also possible…and generally, you’ll notice something here: While flavorful, I am not 100% sold on the balance of the sacrifices. With enough spells and them being pretty easy to learn, losing one is something that can be cheesed much easier than the other sacrifices. An easy way to eliminate this is to have the other player(s) choose the spell. I’m frankly a bit surprised the book didn’t go that route.

Anyways, at level 25, you gain another boon and must provide another sacrifice; if a wizard dies, the apprentice has the option to take over the pact when taking over the wizard’s role. The book also diversifies how the out-of-game version of Summon Demon works, with 20 minor and 20 major demonic attributes adding some serious randomness, but also flavor to the extra-planar entities you can conjure forth. These powerful options range from numerical escalation to unearthly beauty, being insubstantial, etc., adding some serious options to the demon in question, which in turn makes playing characters dabbling in these dark arts more rewarding. The book features two out of game spells, the first of which would be Demonic Servant (guess what this one does…) and the second being Mystic Brand, which can be applied to non-animal, construct, undead or demon members of the war-band and adds some seriously needed flexibility for the sigilist.

There are two categories of these marks: Burning Marks can be sacrificed to deal additional damage; 5 options for burning marks are provided…but one a rolled natural 1, a character with this mark turns temporarily insane, becoming an uncontrolled creature until the end of the “battle” – I assume this can happen beyond fights in game and is supposed to refer to a game. Devotional Marks grant all +1 to Will-rolls and sacrifice them for +3 to a Will-roll; and no that does not stack with itself. 5 of these more defensive marks are provided.

The book also introduces 5 new soldiers: The first would be the assassin: Any creature damage by these guys that is not undead or a construct is poisoned and only gets one action per turn until healed; they also increase their Fight when supported, but never are treated as a supporting figure. At 80 gc, only the sucky armor keeps this strong soldier type in check. Demon Hunters cost at least 100 gold crowns…but if you dabble in demon summoning, you will pay more. With a two-handed sword and a crossbow, F, S and W +2 and a further +1 versus demons and those possessed, these guys are pretty amazing all-rounders.

I already mentioned demonic servants; these guys actually grant you a bonus to summoning via Summon Demon and have a +4 Will…but otherwise are mostly defined by the minor demonic attribute. Weird: The tables of the two final soldiers lack the “gc” part in the cost-entry of their stats in a pretty obvious glitch, that is cosmetic, though. Monks are glass cannons: F and W+4, but armor 10, they fight with a bladed staff that nets +1 damage, while still granting the enemy damage modifier reduction of the base staff. Mystic Warriors are identical to monks in stats and cost, but fight unarmed sans penalties and treat their attacks as magic. They may not use weapons.

The magic item selection of this book is more expansive than those I have seen before, with over 25 items provided. The items per se are cool, though there is more numerical escalation here than in previous books. A good thing, btw.: There are several magic arrows/bolts. These are one use, but powerful indeed: Wraith arrows let you shoot through intervening terrain. Nice here: Since it still requires line of sight, the shooter cannot fire through walls when used with Into the Breeding Pits. Gaining an extra action on a natural 20 can be a gamechanger and immunity versus some particularly nasty demonic tricks, modification of golems…there are some cool options to be found here.

The book “only” contains 4 scenarios…but before you boo and hiss: Two of these are actually mini-campaigns of three sequential parts! One of the briefer scenarios sports telescopes that may summon demons as well as limited escape-routes. Okay, but nothing groundbreaking; mainly a way to showcase demonic entities. The other brief scenario is more interesting: In it, you get a dangerously unstable sphere of magical power that emits random elemental blasts in the center; to complicate things further, notorious barbarian outcast and wooly rhino riding Kornovik alongside some barbarian flunkies enters the game as a deadly boos with a relatively complex “AI”, making the scenario rewarding and risky to play.

Okay, let’s talk about the first 3-part mini-campaign: It begins with a unique angle: The players divide, in secret, their group by half; one half uses the apprentice, one the wizard as leader. Scenario one thus features two halves of a warband duking it out – potentially with one wizard vs. an apprentice; the goal here is to get an amulet of constancy…though it is not easy to actually get the item, but picking it up paints a big targeting sign on the character…so beware. The second half on the group, in the meanwhile, also tries to get such an amulet…but here, time is subject to flux: On any initiative roll, you get unique tricks or penalties, depending on your roll. And yes, this makes the set-up even more cool. In the climax of the sequence of scenarios, the warbands are reunited…and arrive at a place where an extremely powerful boss demon manifests…the amulets help dealing with this threat, though the scenario is very tricky: It is actually one of the few examples, where the spawning of entities exceeded the ability to kill them off unless the players are really good.

Speaking of properly brutal spawn rates: The second sequence of connected scenarios features barbarian guards for the treasures…however, upon engaging them, two per round will spawn as reinforcements. Considering Frostgrave’s lethal, swingy combat, that can be actually rather challenging. After that, the next one features a circle of standing stones with funny glyphs – the most experience can be gained by reading these glyphs…but unfortunately, casting into the circle is hard and there is a very real chance of the wizard not being able to act due to the unique magic of the circle!! Oh, and there is a very real chance of the barbarians on the board spontaneously mutating into chilopendra, significantly more powerful, demonic entities.

Having transcribed the glyphs, the wizards deduce the reason for the barbaric incursion: They have captured a prince and seek to ritualistically sacrifice him to summon their dread demon deity Tiszirain. The barbarian wizard Balken’s ritual is well on the way when they arrive and foiling him will be hard…but then again, there is an interesting question of ethics here. Which one? Well, there is 50 experience in for the PCs if they prevent the rite…but if Tiszirain is summoned, defeating him nets a whopping 150 experience points. This can be particularly cool when one player roleplays his wizard as rather good, while the other play his as more evil.

Now the book obviously contains massive encounter tables (including one devoted exclusively to barbarians). I already mentioned the bosses herein: Two barbarians (both with a nice “AI”) and two powerful demons (with Tiszirain gaining also a neat “AI”) and 6 other creatures, the book offers some nice adversaries to face; the flavor-writing for the entities here is particularly nice.

Conclusion:
Editing and formatting are very good, though not as good as in the nigh-perfect earlier Frostgrave releases. While rules-language retains its precision, the formal criteria aren’t as tight. Layout adheres to Frostgrave’s 1-column full-color standard and features the by now classic, cool boxes of extremely evocative flavor-text. The artworks herein feature photographs of nice full-color minis as well as several gorgeous pieces of full-color artwork. The book, in short, is as beautiful as its predecessors. The softcover uses the high-quality, glossy, thick paper we’ve come to expect. I can’t comment on the properties of the electronic version.

James A. McCullough’s “Forgotten Pacts” is interesting. The density of “bosses” herein is awesome and adds a cool, personal touch to the scenarios. In fact, they, to me, were the highlight of this book and were received very, very well in my playtests. The story-aspect of the scenarios, the one thing I did not consider perfect n “Into the Breeding Pits”, is perfectly executed here and the modifications for them are amazing. Similarly, the power/versatility upgrade this represents will benefit i particular sigilists and, obviously, summoners; both can use it in comparison to other wizards, so yeah, I’m pretty cool with the power-increase the options provide. The expansion also plays very well with the other expansions for the system, so maintained compatibility is a big thing.

That being said, the new soldiers are less interesting than the paradigm-changers featured in previous expansions, with only the assassin bringing something really new to the table. In direct comparison to “Into the Breeding Pits”, this offers no paradigm-change/multiplication of options…unless you are a summoner…or making a demonic pact. The demonic pact system, while not perfectly balanced in my book, is rewarding and fun, but emphasis design in depth rather than breadth and I’m not sure Frostgrave necessarily needs these minmaxy options. This is by now means a bad expansion, but when compared to the other two Frostgrave expansions, it does feel like it is a slightly bit less refines, a bit more specialized. This should not mean that it’s bad, mind you, but I consider it more optional than the previous expansions…unless you are into the demonic gifts angle or want more options for sigilist and summoner; in those cases, this is just what you wanted. Additionally, the superb scenarios and bosses certainly warrant getting this if you are thirsty for more Frostgrave goodness. In the end, my final verdict will clock in at 4.5 stars, rounded down for the purpose of this platform. I certainly recommend getting all 3 expansions for the game, though; using all three makes this system truly a fun way to have some neat, relatively uncomplicated gaming. As an intro to or crossover of wargaming and RPGs, this certainly delivers.

You can get this expansion here on Osprey Games’ page!