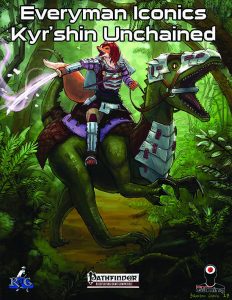 This installment of the Everyman Iconics-series clocks in at 24 pages, 1 page front cover, 1 page editorial, 4 pages SRD/advertisement, leaving us with 18 pages of content, so let’s take a look!

This is, ultimately, where this series comes in – we get various iterations of one character, concisely broken down by level, with the whole progression at one glance and all required material – a all in one package if you will. Now Kyr’shin is no new character for fans of Everyman Gaming – the first installment in this series depicted the dinosaur-riding Kitsune, in his non-unchained version and, or so I have heard whispered on facebook etc., the character has since spread to other publications and may have been one of the reasons for the brilliant Unchained Fighter designed by Alexander Augunas..and yes, he is utilizing the really cool psychological combat maneuvers introduced in Ultimate Charisma for a smart and versatile playing experience. Said unchained fighter chassis remains one my favorite fighter-rebuild and this pdf makes full use of the chassis thus presented, but that just as an aside.

Obviously, the excessively and lavishly detailed biography of Kyr’shin has not changed in the meantime, and both extensive notes on his personality and code of conduct are provided, making him feel like a well-rounded personality, rather than just a collection of stats. His base stats are included for your convenience and no, you do not technically need any of the other books, to reiterate that – the pdf contains the class features, traits, feats – basically everything Kyr’shin uses in his build can be found within these pages, making it simple and easy to grasp how the character works, all without flipping through dozens of books. Beyond the abilities, feats, etc., his mount tsume, the allosaurus gains a similar step by step break-down for all levels. To make that clear once more: You have a handy table that lists all relevant information for levels 1 – 20.

However, we all know that sometimes you just want an immediate statblock – this would be where the sample NPC-statblocks come into play: Levels 1, 4, 7, 10, 14, 17 and 20 are included for your convenience…and oh boy, kyr’shin’s level 20 iteration if a force to be reckoned with, even without his deadly companion…By the way, if you’ve been wondering why I haven’t mentioned the oomphteen archetypes used in the original build…well, there is a reason for that: The unchained kyr’shin doesn’t need them!

Then, the pdf suddenly switches layout from 2-column portrait to 3-column landscape – for a reason: The level 1, level 3 and level 7 iterations of the kitsune are provided in this format – easily printable on one page – and yep, these guys are basically the pregen-versions of Kyr’shin, made as instant-use PCs. As a minor hiccup: The level 7 PC-version reads “Male kitsune fighter 4” – that should be 7. The stats, however, are correct. The level 7 version also comes with the associated Tsume statblock, just fyi.

Editing and formatting re very good, I noticed no glaring hiccups. Layout adheres to Everyman gaming’s nice full-color two-column/three-column standard; it should be noted that the layout is background-less, making printing the file pretty painless for the printer. The pdf comes fully bookmarked for your convenience. Artworks are in full color and actually all new: None are reused from the non-unchained Kyr’shin – Brandon Chang delivers some nice pieces here!

I really like Alexander Augunas’ Kyr’shin – the kitsune is an evocative, unique character; sympathetic, mischievous and badass. Come on: Katana-wielding, dino-riding kitsune? That’s a sight you are not likely to forget! Personally, I do actually prefer the unchained version of Kyr’shin over his original iteration – the unchained fighter chassis allows for an easy and well-made synergy with Ultimate Charisma and the resulting version feels very much organic and fun and plays in a fluid, interesting manner. My final verdict will clock in at 5 stars + seal of approval.

You can get this cool iteration of the iconic kitsune here on OBS!

You can get the cool Unchained Fighter here on OBS!

(And its expansion is right here!)