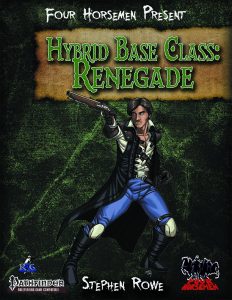 This hybrid class from the Four Horsemen clocks in at 11 pages, 1 page front cover, 1 page editorial, 1 page SRD, leaving us with 8 pages of content, so let’s take a look!

The renegade, chassis-wise, is a blending of the gunslinger and rogue and receives d8 HD, 6+Int skills per level, good Ref-saves and a 3/4 BAB-progression. At 1st level, the class gains gunsmith and the class does gain Panache (based on Charisma, maximum equal to Charisma-modifier) and may regain panache via killing blows with firearms, critical hits with pistols and, if applicable, the class pools both grit and panache and may use the resources interchangeably. Proficiency-wise, the class gains proficiency with simple and martial weapons as well as firearms and light armors, but no shields.

The class also gets so-called charms – basically, think of them as the deeds of the class – these are thankfully no re-threads of classic deeds, but generally sport some nice tricks – temporarily fixing broken items, a variant of gunslinger’s dodge, 30-ft.-ranged feint, acting in a surprise round, drawing aggro from nearby enemies via Bluff…the charms cover a rather broad sense of options and generally can be considered well-aligned with the levels they’re unlocked at – at 3rd, 7th, 11th, 15th and 19th level, new charms are unlocked. Hiding pistols on your body can e.g. be found at 11th level and at 15th level, a minimum-panache-powered (improved) uncanny dodge + evasion can be found. The capstone decreases panache-costs for the charms, etc.

The class also features archetypes, with the first being the brigand, who only gets 4 + Int skills per level and a slightly modified gunsmith. The archetype also has 5 exclusive charms, which basically allow for some solid poaching among gunslinger deeds like targeting, gunslinger’s initiative, etc. as well as a different array of rogue talents. The contract killer similarly has a modified list of charms with panache-powered skill-checks fitting for killers (Stealth and Disguise, hitman-style) as well as deadeye and dead shot…and there are special assassin shots that allow for skirmishing sniping shots and silencing gunshots. Once again, the archetype has a modified rogue talent list. The final archetype is called the smuggler, who also gains medium armor proficiency, trapfinding at 2nd level and gets a panache-minimum-based option to carry around pretty significant objects as well as gaining options to gain several options that represent your access to the black market and unsavory places and enhanced Will instead of Reflex saves – once again, sporting a hand-crafted talent-section.

Editing and formatting are top-notch, I noticed no significant glitches. Layout adheres to Rogue Genius Games’ two-column full-color standard and the pdf sports a nice full-color and a b/w-artwork, both of which I have not seen before. The pdf is fully bookmarked for your convenience.

Stephen Rowe’s Renegade is a solid, fun hybrid-class – it imho is superior to the gunslinger in that its 3/4 BAB-progression and selection of tricks help mitigating some of the issues associated with gunslinging as well as providing some cool tricks and potential for tactical depth via sneak attack – a well positioned renegade is FUN to play and pretty cool. At the same time, while I did enjoy the class as such, I think the renegade would have benefited from a bit more unique tricks. At the plus-side, the rogue talent selection provides more player agenda than the gunslinger…so how to rate this? I prefer this class to the vanilla gunslinger and the increased player-agenda is nice. In the end, I will settle on a final verdict of 4.5 stars, rounded down to 4.

You can get this neat hybrid class here on OBS and here on d20pfsrd.com’s shop!