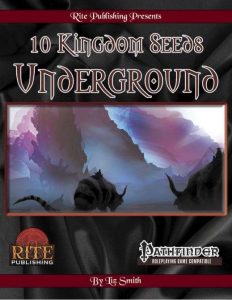 This little pdf clocks in at 13 pages, 1 page front cover, 1 page editorial, 1 page SRD, leaving us with 10 pages of content, so let’s take a look!

Okay, if you’re new to the concept – the Kingdom Seeds-pdfs are basically collections of 10 sample settlements, ranging usually from thorp to village, which are depicted complete with a settlement statblock and a brief summary of the village in question as well as notes on intriguing locales and a few rumors/adventure hooks for each – think of them as kind of akin to Raging Swan Press’ backdrops, but instead of focusing in detail on one locale, we get a few of them in broader strokes. Thing is – this installment not only goes underground – it also changes the formula of these pdfs by splicing crunchy tidbits into the respective entries.

Take, for example, the first settlement, NE Coldwylde, carved into pink sandstone, it is the home of escaped aranea slaves that have managed to create a new magical rope – the fanged rope of entanglement, made from an aranea’s last silk and fangs, it can entangle and poison those that try to escape them – really cool, magical item, with a somber note…and the means of construction have some serious roleplaying potential.

In CE Deepdell, gnomes are working on a mysterious vein of onyx…and it’ll be just a matter of time before they can deduce the power-component-like properties of these gems…. On the other end of the alignment spectrum, Frepond represents an idyllic academy of music and magic that would usually have no chance in the cutthroat underdark – but the singing stalactites and stalagmites in the cavern vastly enhance the options of bards, allowing them to maintain two bardic performances at once –and yes, the rules codifying that are concise and precise, though personally, I would have enjoyed to see a range here – I assume the default range of 30 ft. to tap into such a rock’s power, but I’m frankly not 100% sure.

A blaze of light in the dark is atop Griffonfort – the ceiling of this cavern is illuminated by a heatless flame. The place is haunted by frustrated ghosts of the first settlers, but the dwarven leaders try to make the dream of a perfect fort a reality, slowly releasing the vanquished ghosts under the glow of continual flame, greater, the new spell to supplement this one. Ironwynne was founded by the Ironfeet mercenaries as a supply and support center and as such, has a harsh, militaristic feel – even though the company was shattered. The reputation remains – and so do the mundane, iron boots that make for well-crafted marching utensils…or for percussion.

Joncrest is inhabited by Halflings that herd lizards. They harvest their tails, which regrow. Yeah, that’s pretty damn cool. But wait – Halflings can’t see in the dark! Well, these guys can: We get alternate Halfling racial traits – darkvision 60 ft. in exchange for keen senses and improved natural healing in exchange for Halfling luck, mirroring the hardy reptiles they herd. Amazing one! Narland occupies a huge cavern, which holds multiple towers, each focused on teaching a discipline of magic – cutting edge, these folks push the limits of magic, as represented by a new regional trait that lets you make a concentration check as a swift action to push a chosen school’s spell’s caster level…but at the risk of a magical mishap – which is accompanied by a percentile table with 7 different effects, just fyi. Really cool!

Pryness is situated next to a massive underground river, providing ferrying (and smuggling) services for those that require it; predominantly Halfling, the settlement also the home of, surprisingly non-evil river rat variant wererats that can only infect willing beings – cool! The problem is just…such societies are easy to infiltrate by the REAL wererats…

Silverflower looks like a place littered with dead stems in light; however, in the darkness, the flowers generate a soothing glow and wondrous scent – as a result, the place has a darkvision-only policy…which could make for a decidedly wondrous place to visit. Oh, and the perfume made there can help when navigating the more precarious social situations…though the effect does change, based on lighting conditions. Damn cool! More of a deathtrap: Stonekeep. The CE hamlet inhabited by dwarves can carve tunnels ridiculously fast, using identical, vault-style hyper-secure doors (which evil folks may wish to get for their magic-hampering and great locks…)…but the nasty dwarves have this habit of unleashing a rock troll with adamantine false teeth (!!!), their secret weapon, on those who come calling – this is an adventure just waiting to happen!

Editing and formatting re very good, I noticed no undue accumulation of hiccups. Layout adheres to Rite Publishing’s two-column full-color standard and the pdf sports some neat full-color pieces I haven’t seen before. The pdf comes fully bookmarked with detailed, nested bookmarks for your convenience.

Liz Smith stepped up to the next level. I don’t know if it’s the guiding hand of Rite Publishing’s new line developer Stephen Rowe, but this blows the old Kingdom Seeds out of the water. The settlements all feature some truly evocative, unique, magical angle that sets them apart, that makes them distinct in spite of their brevity. The added crunch-components for each village amps up the wonder further – even if they’re just small tweaks, they add a sense of the unique to everything. Heck, in some cases, I really, really liked what these humble pieces of crunch do – they help tell stories and furthermore differentiate the series more from Raging Swan Press’ more fluff-centric offerings. For the low asking price, you get some truly wondrous and amazing places to visit and cool supplemental material to boot. What’s not to like?

Easily worth 5 stars + seal of approval and a strong recommendation for the very fair price-point!

You can get this evocative, inexpensive pdf here on OBS!