The Virtuous and the Vile: Morithal, Lord of Unceasing Hunger 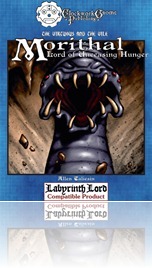 This pdf from Clockwork Gnome Publishing is 22 pages long, 1 page front cover, 1 page editorial, 1 page SRD, 1 page back cover, leaving 18 pages of content, so let’s check out this first installment of “The Virtuous and the Vile”!

This first installment of Clockwork Gnomes’ new Virtuous and the Vile-series introduces us to the religion of the Maggot god Morithal, a slithering being of unceasing hunger. If you’re now reminded of similar gods of gluttony like Aggramogg or Rovagug, rest assured that the first chapter presents us already with reasons why Morithal is worthy of your attention: The first basic concept is that Morithal essentially makes the word “ancient” feel positively like an understatement – the maggot god is a so-called Protogenoi, a deific remnant of a multiverse that has long since ceased to exist. Once a god of fertility, the Maggot God hid in the folds of time and space and weathered the unceasing collapse, transforming slowly from his initial portfolio when finding that the new multiverse not only deprived him of divine sustenance in the form of worship, but turned out to be rather hostile – the light of the sun and even the stars is bane to the maggot god who had slept too long in utter darkness.

The second basic assumption/concept introduced in the beginning, is that there is not one singular underdark, but rather a variety of underdarks – all the subterranean structures of caves and caverns, which are inhabited by a plethora of our most favourite depraved beings and species of all the planets are connected via unstable portals and perhaps even physical pathways created by the burrowing of Morithal, who ceaselessly hollows out the worlds, eating through them like a worm through an apple. Furthermore, the passing of the protogenoi sees him shed crystalline excrements, so-called Morthacite, which is responsible for the spontaneous creation of many a life form that is at the bottom of the food chain, thus enabling the vast amount of underdark civilizations in the first place. For people like me who always were somewhat discontent with “magic did it” as a rationale for the abundance of subterranean life, the ideas presented herein are gold indeed, but the pdf does not stop there:

Instead, we get information on the structure of his anything but unified variety of cults and their promise of the final days, when all will be consumed by the maggot god. Indeed, the church promises not damnation in the Abyss, but the act of being consumed and obliterated entirely by Morithal, a welcome prospect for nihilists and people who have lost everything and fear the damnation of the lower planes. Excerpts from his holy scriptures, the “Oaths to the Starving Coterie”, are presented in compelling prose alongside a variety of sample prayers to recite for cultists and clerics. Holy feasts, the modus operandi of his cult, the new famine domain and 2 new spells ensure that encountering any parts of Morithal’s often secretive cult should provide for a memorable session indeed.

And that’s before going into what I consider a nice idea – with the absence of the Illithids due to being closed content, the Duergar have lacked a compelling and disturbing racial narrative and this pdf provides exactly that, almost as a second thought among the expertly-written prose herein – you can just ignore it or go with it.

The most compelling parts of Morithal’s whole narratives were not the prayers or how his temples are batized/fitted out, though – at least not for me. For me, the true strokes of genius were the fluff depictions of his greatest champions: There is the shapechanging, incorporeal bing named Hollow Longing, which makes for his executioner in the guise of a ghoulish being that is not quite as one would expect. His highest servitor is the legendary first of the purple worms, the Morthacite-studded, self-aware and titanic dread Gothgor the Putrid, at the same time consumer and highest authority of all his creatures. And then there is a self-aware black pudding called Paranvoi, who has consumed the minds and bodies of his whole world, gaining their spirits and souls and blessed with perfect foresight of the future by the dread maggot god – the titanic ooze bubbles on its home-planet, covering all but one mountain where supplicants may ask for fractions of its probably mad, almost omniscient being for their temples. Such a fragment of this being, btw., clocks in at CR 12 and is one of the new creatures provided herein. The other is a genderless, all-consuming humanoid maggot being called “Endless Hunger” (CR 8), things that seemingly seem to spontaneously spawn near large concentrations of Morthacite and death. The latter get an awesome, stunning, full-colour artwork.

Editing and formatting are top-notch, I didn’t notice any glitches. Layout adheres to a 2-column standard and features a nice greenish background. The full-colour artworks all range at the upper tier of quality, which brings me to the question: Why use this cover? Seriously, of all the pieces of artwork, the cover is by far the worst and especially the disturbing 1-page artwork of the endless hunger is much more compelling. The pdf is fully bookmarked and comes with an extra version that omits the background and all art apart from the cover and can thus be considered printer-friendly. the supplement also comes with Herolab-support, which should be another plus for many people. All right, if you haven’t guessed it by now: I LOVE this pdf. Why? Via some easy tricks and ideas, it fixes some logic bugs that have annoyed me for quite some time and furthermore enables you to finally reconcile dark tapestry-style beings with regular divinities. Also: Morithal is a being of terrible power, as deities should be. It is clear from the write-ups of his favoured agents that they belong to the most powerful of beings. Thus, Morithal evokes a sense f primal dread by proxy that is enhanced by the fact that just putting a shard of Morthacite somewhere, you can remind your PCs of the enormousness of the threat he poses. Worse, it is his very being that can be considered one, if not the source of life, making evolution of some and perhaps all species connected to an intrinsic, atavistic dread. Add to that the expert writing, rock solid rules, cool new creatures, awesome prayers and you get an excellent sourcebook on a dark religion that may very well change how you think about evil gods, their motivations and all the slithers and crawls. Disturbing, genius, cheap, top production values, nothing to complain about – my final verdict will be 5 stars + Endzeitgeist seal of approval. Oh, one thing: I would have loved to see the epic-level stats of his favoured servants, but I guess you can’t have everything.

The Virtuous and the Vile: Morithal, Lord of Unceasing Hunger is available from: