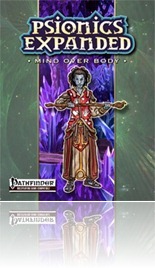 This pdf from Dreamscarred Pressis 25 pages long, 1page front cover, 1 page editorial, 1 page SRD, leaving 22 pages of content, so let’s check out what we get this time around!

After a short introduction to the concepts at hand, this pdf kicks off with the new Vitalist-base class: The vitalist gets d6, 2+Int skills per level, bad BAB, good fort and will-saves and up to 343 PSP and access to 11 powers of up to 9th level. Vitalists are interesting in that they may forma collective between willing individuals and redistribute/divide up healing effects. Thus, if you for example heal 18 points of damage, your vitalist may redirect (your willingness provided) e.g. 5 to himself and 6 to another of your comrades, leaving you with 7 HP healed. The vitalist also learns from a selection of 6 knacks with which to inflict negative effects on his foes. More importantly, the vitalist may transfer wounds from his allies to himself and suffer the transferred damage as subdual damage. At higher levels, the allies of the vitalist can request healing and receive it without using up the vitalist’s actions via telepathy.

3 different methods are detailed, which essentially constitute bloodline-like sub-professions. The Guardian (2 additional knacks) centers on keeping his allies from being harmed, the mender (1 additional knack) improves healing capabilities and the soulthief gets 2 soulthief talents, which is a bit confusing – while vitalists get knacks and knacks essentially ARE talents, the name should stay consistent to avoid confusion. Soulthieves focus on transferring the wounds to their foes and leeching HP from foes subjected to their offensive powers. The methods are all quite detailed and provide different abilities and cap-stone abilities for the class, which is nice to see.

Next up is more support for the base-classes, starting with the Transmogrifist discipline for the Psion, the Infiltrator and Survivor paths for the psychic warrior. I have a problem with the survivor path: It uses “Mettle”(Ex). If you expend your focus, you’re treated as having the ability until the next round. Mettle always was and still is broken. It’s essentially evasion (and at later levels, improved evasion) for fort- and will-saves combined. SICK. Ever since the introduction of this ability in 3.0, I HATED it. Let it die. Even the limited access to the ability, which somehow balances it, does not make this a good design choice. Just my 2 cents, though. Wilders can now use healing and raging surges.

After that, we get 9 new psionic feats, most of which deal with expanding the options available to vitalists via their collectives/method-abilities.

The new powers-section of the pdf is prefaced by the vitalist’s power-list (as well as extensions for psions/wilders and psychic warriors) and includes 17 new powers. And boy, what powers! Some of my group’s psion’s favorite powers from 3.5 are included – from the awesome buff “battle-sense” to the curse-like compulsion “brutalize wounds” and the last-resort save “deferred fatality”, these powers are excellent. Seriously, they include some of the most innovative and iconic powers.

The pdf also includes a new PrC, the Metamorph (d8, 2+Int skills per level, medium BAB, medium fort-save, 9 levels of manifester-progression), which is centered on manifesting metamorphosis-powers. Surprise. They get 7 additional menu choices to choose from when using respective powers and may even modify their changes on the fly. While the PrC is rather linear and usually, I don’t like PrCs that are too tightly focused, I actually love this particular one. With one catch: The artwork for it is downright horrendous and features an obviously evil lady grinning a shark’s grin. She does not look cool or threatening. She looks stupid. The class deserves better.

Seeing that Psychometabolism is the focus of this pdf, the grafting special quality for items should come as no surprise. And come on, who doesn’t consider equipment temporarily fusing with you cool? The gloves of the beast, which grant you natural claw attacks and the mender’s vestments, which improve a vitalist’s ability to transfer wounds make for the final bits of content we get in this installment.

Editing and formatting are quite good, though not perfect – soulthief talents, e.g., should be renamed knacks. Layout adheres to a 2-column standard that is easy to print out. The artworks follow no consistent direction and I hope that in the final book, we get one coherent style, preferably not the one of lady shark-grin. The pdf features extensive bookmarks. I’ll come right out and say it. I don’t like the vitalist. There. I don’t think psions should be able to heal others. The transferring wounds-trope fits, at least in my book, better with shamans and mystics than with adepts of the mental arts. That being said, the class is actually well-constructed: While not as efficient a healer as divine casters, their ability to split healing and heal allies without using their own actions is innovative and should lead to the class being appreciated in game while avoiding the heal-bot trap. Design-wise, this class is smart. However: I would have loved to see some clarification on whether e.g. a summoner’s eidolon or similar being (familiars) constitute one member of the collective (and thus take up a slot) or are members by proxy. The material herein is very much geared towards the supportive psion and thus I was rather surprised to not see an adaption of the 3.5-power Sudden Shield, especially for the Guardian as a knack, a special kind of shield would have been cool – an more balanced than the 3.5 sudden shield and its greater variant.

The powers within, as already mentioned, are excellent and the feats are ok – IF you’re looking for more options for the vitalist. If you’re not intrigued by the class, you won’t be able to use most of them. The PrC is excellent, though the artwork is…well, I’ll stop my rant.

How do I rate this, then? For me, personally, this pdf was a dud. I don’t like the concept of the Vitalist. However, in a world without clerics like the Third Dawn setting, the class SHINES. The design per se is excellent (and probably better than for most divine healing classes) and feels quite different from the standard divine healer-tropes. The additional content is more tightly geared towards the new base-class than in “Find the Mark” and, while I would have preferred a larger selection of powers for the vitalist, I get the design-rationale. How to rate this, then? In spite of disliking the concept of the base-class, I like its execution and while there are some rough edges here and there, the overall content of this installment of Psionics Expanded is quite well-written. Not as consistent or generally useful as in “Find the Mark”, though. If you look at this pdf as a class-book, I’d recommend it to you as a 3.5 or even 4-star file. If you’re rather looking for some additional options for other classes, this might be less useful, but is still worth the low asking price. My final verdict will thus be 3.5 stars, rounded down to 3.

Psionics Expanded: Mind Over Body is available from: