Party of 1 – Kalgor Bloodhammer and the Ghouls through the Breach 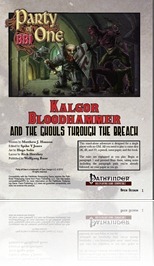 This pdf from Open Design is 14 pages long, 1 page front cover, 1 page SRD, leaving 12 pages of content. So. What exactly is this Party of 1 about?

Remember those “Choose your own story books”? This is essentially an adventure that can be run without a GM and with just a couple of dice – 73 different sections, most of which provide more than one outcome, guide you through the adventure. You run all combats, play both the opposition and your character as well as allies and the basics are the PFRPG-rules – essentially, we get 2 sheets for the main character, the dwarf Kalgor (one at 1st level and one at 3rd), with the latter being assumed to be the default.

Over the course of the adventure, Kalgor not only has to brave an initiation ceremony, but also deal with deadly undead, rescue and fight along allies and might even uncover a conspiracy of sorts! As no DMs are required, any additional information I could give would act as spoilers, so I’m breaking my usual format and jump straight to the

Editing and formatting are very good, though not top-notch. The beginning fails to e.g. mention that you should also have a d12 ready. Layout adheres to a 2-column standard with a parchment-style background. Rules-information is printed in read and I didn’t notice a “dead link” among the numbers. The pdf comes with neither bookmarks, nor a printer-friendly version, which is a bit of a pity. The amount of different outcomes crammed into the adventure is rather interesting, as several factors (secrets) decide on different story-branches and, much like a good computer-rpg, provide for some rather neat replay value. On the other hand, some of the links and how the secrets work that open up new options can be a bit confusing – making having holy water for example a deciding factor for a new number felt a bit strange to me, while the basic street-level-entry can feel a bit confusing.

The text also always assumes the 3rd-level default – alternative mentioning of the 1st level stats would have been nice. However, the story, while simple, is actually adequately complex for the short length.

Add to that the fact that this is an easy way to learn PFRPG-rules and we have a nice little pdf that is definitely worth the low asking price. Next time you’re on the train or some other location where you don’t have a GM at hand, this will definitely come in handy to satisfy your gaming needs. That being said, the lack of a printer-friendly version is a bit annoying, as in printed out b/w you can’t make out the difference between the red and black sections of the text. Also, the motivation for the instigator remain, at least slightly clichéd and Kalgor, as a character, is rather hard to relate to and pale. This alongside the minor glitches remain my only problems with the adventure and thus I’ll settle for a final verdict of 3.5 stars, rounded down to 3 – a good and fun past-time with some minor blemishes and an exciting finale.

Party of 1 – Kalgor Bloodhammer and the Ghouls through the Breach is available from: