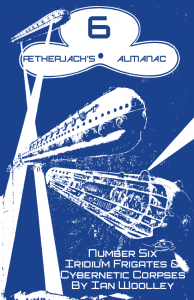 The sixth zini in the Ætherjack’s Almanac-series clocks in at 2 pages, which, as always, contain essentially 4 pages – print them, fold the booklet in the middle, done. The first half of these pages contains the front cover.

This review was requested to be moved up in my reviewing queue as a prioritized review via direct donation.

On the first half of the second page, we get the Cyber Corpse AI Hub background, making you the AI of a decaying warship; you are an old warship at 2d6% capacity, and have a corpse soldier as well as a barely-functioning plasmic cannon. You have an internal armory of advanced weapons and armor, but it is lost. Within you. Why? Well, that’s a curious thought, isn’t it? Your possessions also include the hole in your heart that captain and crew abandoning you left. Oh and works of art from cultures you helped destroy.

The advanced skills include a solid 4 Strength, 3 Iridium Frigate Piloting, 2 Fusil fighting and Fist Fighting, and the basics of Mathmology as well as a bit of Astrology, Religion, and Arts so you can be pretentious in your loneliness. (George R.R. Martin’s scifi stories, anyone?) Here’s the cool thing: You do NOT have awareness of your internal structure; you don’t have a proper engine for sailing within a sphere, but you can, provided you have the charts, sidestep reality and switch spheres.

Of course, we do get stats for the ravaged iridium frigate ship, a fully repaired version for reference, and stats for the cyber corpse drone, which has 9 Skill, 15 Stamina, initiative 3, and armor of 0, 2 or 4; it deals damage as a Modest Beast or weapon wielded; the Armor 4 is only deployed when not caught unaware. A full d6 Mien table is provided. Minor nitpick: The background lists the possession as “corpse soldier”, and not as “cyber-corpse drone”; as an aside – a less potent ravaged cyber-corpse drone would have imho made for a good addition here. Why? Well, when comparing this to the Shellfolx background in #4, the cyber corpse drones are superior in every way: I Skill more, 7 Stamina more, 1 Initiative more, and vastly superior armor, plus more weapon capabilities. The same holds true for the Iridium Frigate versus the Golden Barge of the Shellfolx. Oh, and the advanced skills. Indeed, the background is VERY MUCH like the shellfolx, just stronger in pretty much every way.

The second half of the first page, traditionally the back cover-ish one, contains only brief notes on ship-based hyperspace generators; something more substantial would have been nice here. I did, however, enjoy the shout-outs to two indie supplements by other publishers that work well in conjunction with this series.

Editing and formatting are good on a formal and rules-language level. Layout adheres to a two-color standard using dark blue and lighter-grey-blue-ish white text; easy to read; a b/w-version is included if you don’t like the colored version. The collage-style artworks employed are charming as always. The pdf has no bookmarks, but needs none at this length.

Ian Woolley’s sixth Ætherjack’s Almanac provides a pretty neat, fun background with lots of roleplaying potential; however, I couldn’t help but feel that the background would have benefited from a better balanced cyber drone body (perhaps more of them to make up for that?), a frigate in line with the shellfolx, an Advanced Skills array in line with the Shellfolx – you get the idea.

I’d be much more impressed by this, were it not in quite a few ways a super-up version of Shellfolx. I know that Troika embraces chaos and uneven characters, but the comparison here, within one series, makes this feel like overkill. I like the design, but I hate how inconsistent it is regarding the baseline of power of comparable backgrounds in its own series. It’s, essentially a reskinned #4. As such, my final verdict can’t exceed 2.5 stars, rounded up only due to the fact that Troika! is more resilient regarding such inconsistencies than many comparable systems.

You can get this zini here on OBS!

If you need to choose, I’d rather recommend the imho superior #4 in the series. You can find it here!

While this zini didn’t impress me, the series per se is pretty neat – you can support the author here on patreon.

If you like my reviews, please consider leaving a donation, or joining my patreon here.