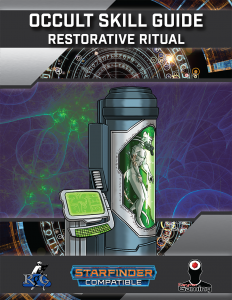 This Occult Skill Guide installment clocks in at 19 pages, 1 page front cover, 1 page editorial, 2 pages of SRD, leaving us with 15 pages of content, so let’s take a look!

All right, as you could glean from the title, we have another great ritual to employ in SFRPG here, one that uses the rock-solid ritual-engine featured in the ritual-centric installments of this series previously. It should be noted that this is a stand-alone pdf – this means that all rules for the ritual base-engine have been included within, and that justifications of why rituals work and similar advice to implement them in your game also features within. (With the success of Grimmerspace, it should also be noted that implementation of the ritual engine seems like a perfect fit for that setting, but that just as an aside.)

Anyhow, I’ve already talked in length about the potent ritual engine in previous reviews of the series, so if you need guidance there, please do take a look at my reviews of the other ritual files – I’d rather take an in-depth look at the new material than repeat myself here. Okay, so first thing you’ll notice, is that the ritual doesn’t exist in a vacuum: Instead, it features two new technological items, the first of which is something I couldn’t believe wasn’t part of the core book – the handheld biometric scanner, which is a level 2 item. It requires the target to wear a hospital gown or the like, and allows you to make Medicine or Life Science checks to determine whether the target suffers from afflictions (and if so, which ones), and also determine whether the target suffers from corruptions. This takes a minute, so plenty of time to start thinking about means to fool the scan. A big plus here would be the smart way in which the DC to discern the nature of an affliction or corruption scales – only the presence of something odd has a fixed DC. I like that, as it does not hamper with narrative angles, while still providing information and progress. Kudos for this smart design decision.

The second item is actually really inexpensive for its level 4 item-level, but this is explained by its massive unwieldiness – a stasis unit, with 200 bulk, isn’t something you’ll be carrying around. It can hold a single creature of size Large or Smaller in suspended animation, and the process of awakening or being placed in stasis takes 1 hour. For the target, one day passes per 10 standard years. While they prevent mental atrophy, muscular atrophy is an issue – oh, and guess what? There actually is a properly statted “disease” that requires a victim to engage in a therapy regimen to be allowed to save. I like this – it once more puts the story in charge and makes the rules seamlessly support narrative angles. It should also be noted that the mere presence of stasis-units allows you to potentially really emphasize the vastness of space. If you e.g. love the good old classic “The Forever War” and always considered things like drift engines and the like to be detrimental for your conception of how a scifi/space opera game should behave, well, there you go – one item and all the stories about the ginormous nature of this vast space you could craft from it.

The ritual (categorized as belonging to the mageologic ritual school) featured within this installment would be the level 3 Restore the Broken Body, which requires 3 hours to execute – for the components, we need a biometric scanner, a stasis unit and a tier 3 computer; as a reagent, we require scrap computer components, nourishment agar, a break enchantment, a remove affliction and a 4th-level mystic cure spell chip. To qualify for being restored, the target creature must either be alive, or have died no more than 6 hours prior to the ritual’s start – this rather strict time-line obviously has quite a lot of potential for emergent play, as PCs hustle to try to get their fallen comrade back to their ship/base in time. The backlash for this ritual is pretty lenient – it only sickens and exhausts the targets; the ceremony itself is also comparably simple: The target is first stripped of equipment except biotech and personal augmentations that are essential for survival. The target is then thoroughly sterilized via Medicine or Life Science. After that, a pint of blood is drained from the body and provided to the scanner hooked up to the computer. The target is then placed in the chamber holding the nourishment agar, which, as a whole, requires three checks, including one for Computers/Engineering. After that, the computer scans the restoration chamber, determines nature and extent of damage sustained, and uses an overlay of an extrapolated genetic blueprint and biometric reconstruction drones (BRDs – as a German, that made me lol; around here, that stands for “Bundesrepublik Deutschland”) perfectly reconstruct the target.

Their capabilities properly codify their available medicinal level and Medicine bonus, and the ritual entails a brilliantly codified if/then system for additional effects – as noted before, the ritual can restore the dead back to life, heal poisons and diseases or break curses etc.; it can also heal ability drain and restore missing systems/body parts – the latter actually provides a concise sequence of how the ritual prioritizes them. Really cool! Finally, there also is the means to reduce corruption point total, allowing for interaction with the amazing corruption engine, also featured in this series. This, however, is NOT what made me smile most about this book – it’s impressive, sure – but guess what? The failure effect this time around is frickin’ brilliant. Each ritualist, on a failure, has a 50% chance of being subjected to flesh to stone, and additionally, the BRDs (*chuckles*) have a 50% malfunction chance that will cause the target Hit Point damage and actually worsen diseases or poisons, and they cause ability drain and ruin systems in sequence instead. My one complaint here would be that it would have been smart to codify the BRDs as either tangible or nanites – leaving that up to the GM is smart, but could result in a brief bout of confusion. Under the pretense that they are nanite-like, we have a pretty cool scenario, wherein PCs wake up from e.g. a TPK on board of a ship, surrounded by petrified folks, only to start suffering from mysterious ailments – finding out what happens makes for a great angle tinted with body horror.

The ritual is supplemented with a brief legend and two sample encounter-implementations. As before, we receive copious advice regarding the creation of our own rituals, which is amazing.

Editing and formatting are very good on a formal and rules language level – apart from a typo and the BRD-component, I noticed no hiccups. Layout adheres to the series’ two-column full-color standard, and the artworks provided by Jacob Blackmon are nice and lend a cohesive visual identity to the supplement. The pdf comes fully bookmarked for your convenience.

Alexander Augunas is on a spree of knockout, awesome supplements with this series. I absolutely adore the Occult Skill Guides and what they represent. Not only do they emphasize the magical aspects of SFRPG, they do so in a manner that genuinely feels like magic that could exist in a space opera/scifi setting. Whether benevolent or horrific, this ritual allows for whole new angles, and allows a group to continue playing after suffering a TPK, which is always a plus. (So yeah, obviously a Mass Effect 2 plot-twist is very much in the cards with this!) All in all, I consider this and its vast potential to be well worth the low and fair asking price. My final verdict will clock in at 5 stars + seal of approval. (Seriously, if you even remotely like the idea of a more magical setting, or if you are as excited for Grimmerspace as I am, do yourself a favor and buy the whole product line now. It’s worth every cent.)

You can get this amazing ritual here on OBS!

Are yo enjoying my reviews? please consider supporting my patreon here or leaving a tip via direct donation. Reviewing takes a lot of time and effort, and those are the means to keep the lights on.