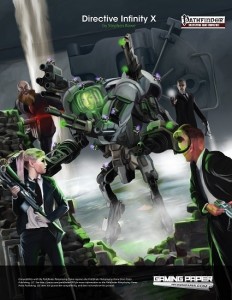 This module clocks in at 58 pages, 1 page front cover, 1 page SRD, 1 page back cover, 2 pages of editorial, leaving us with 53 pages of content, so let’s take a look!

I received this module prior to public release and playtested it. It was moved up in my review-queue as a prioritized review at the request of my patreons.

The premise is pretty much fantasy modern day: In a world that is pretty much like our own, monsters and the like are common and pose a significant risk to the populace. The government has two choices for the truly dangerous creatures out there: Submit to a painless death or be confined and become property of the state for scientific scrutiny in one of the Infinity Directive’s hidden prisons. The PCs are agents of 7th level and the module assumes a medium XP-track and get Exotic Weapon proficiency (Firearms) as well as Technologist.

…and this is as far as I can go sans SPOILERS. Potential players should jump to the conclusion.

So, the module begins with a detailed introductory briefing – the agents are told that a certain secret prison facility, Facility X, has been compromised: While the dimensional barriers are intact, the neurotoxin to pacify the powerful inmates has not been released, evacuation protocols are in place. The facility is on lock-down and no one knows what’s going on in facility 10 – so yeah – there you have it. On the plus-side, there is only one way to enter or exit the facility, so no huge amount of powerful inmates will scour the land…for now. The agents receive dossiers for the most powerful of inmates – and they are awesome: Handouts, fully realized each and every one of them, they bring the agents up to what to expect…and it sure ain’t pretty. Urdefhan death cult leader. Intelligent frost drake. Quickling con-artist. Vampire. A soul-bound mannequin called Experiment 42…hag sisters…a psychotic efreet…yeah, this will be fun.

Shaped cylex explosives may prove to be important – and thus, the agents are off to deal with the situation. Below a storage tank, the PCs can enter the sewers – and they’ll have a brutal welcome committee: For one, they will encounter cranial crabs. Think of them as headcrabs with laser torches that detonate, but instead of killing you, they try to render you helpless and implant cranial bombs in your skull. Fun. Even cooler: Swarm-version included. Once this module is over, PCs will HATE them. Oh, have I mentioned the cyborgs? I should mention the cyborgs. For example the cyborg scrags with chainsaws for hands. And yes, the artwork makes them even more awesome than I can convey here. I mean, come on: Scrags with chainsaws for hands. YES.

More importantly, the actions of the PCs pretty much matter from the get-go, for the peculiar location of the complex makes flooding a VERY real option/potential problem: The maps of the complex(based on the modular dungeon-maps by Gaming Paper) come with an easy codification that lets you track flooding of the prison.

Because we know that cranial crabs and cyborg brineborn marsh giants and the rogue’s gallery down there isn’t yet enough of a challenge, adding flooding to the mix makes things even more interesting…oh, and yes, the overseer robots are compromised and dangerous…and the traps spread throughout the complex are nothing to sneeze at either. Oh, and guess what? The true mastermind behind the incident has a timeline – the longer the PCs take, the more creatures/villains from the rogue’s gallery will come under the gray eminence’s control. Have I btw. mentioned the barghest serial killer or the werewolf? The prisoners shot chock-full with drugs?

Agents progressing far enough will also be harassed by doom-pronouncing whispers and it soon becomes apparent that simulacra pose a significant risk. Speaking of risks: Laser tripwires. Gravity mines. EMP…and there is a fission reactor the PCs better stabilize…oh, and that pesky permanent gate must fall…it may non-functional for now…but for how long? Oh, and yes, the final confrontation (no, not spoiling against who or what) is downright delightful and brutal!

(And here’s to hoping that none of the high-profile prisoners got away…otherwise, the agents will have their next assignment cut out for themselves…)

Editing and formatting are good – while I noticed a couple of typo-level glitches, the overall presentation is solid and well done. Layout adheres to Gaming Paper’s elegant 2-column b/w-standard and the pdf sports 11 glorious dossiers for the villains as hand-outs. The artwork provided is surprisingly copious, in gorgeous full-color…and here’s the kick: See that front cover? The internal artwork is the same, high level of quality – and visualizes perfectly quite a lot of the adversaries herein. Showing the players the artwork really works well here – kudos! Cartography is based, as mentioned before, on Gaming Paper’s modular rooms, which per default are player-friendly. The pdf sports no extra player-friendly maps beyond that, but I won’t hold that against it. EDIT: Now, this module comes fully bookmarked for your convenience, eliminating basically my one complaint!

Stephen Rowe knows how to craft absolutely awesome adventures – this one basically reminded me of a glorious, classic Marvel storyline, wherein Venom instigated a prison break in the super villain prison. The module does practically everything right: It sports unique adversaries, does a great job of blending modern day concepts with fantasy and scifi-elements sans making things awkward, sports cool new critters, is challenging, has options for social encounters, environmental hazards and also features smart foes. If anything, this module made me wish it was more than a one-shot, that it had a whole 300-page book of setting information and delightful prisoners/villains, SCP and/or Agents of S.H.I.E.L.D.-style. This is an extremely entertaining modern module with generally awesome aesthetics. This module sports so many downright awesome components and ideas, with the handouts being the icing on the cake – so yes, Stephen Rowe once again proves that yes, he can write very good crunch…but oh boy, is he a master of writing brilliant modules! This is absolutely inspired and will leave you asking for more!

You can get this awesome modern adventure module here on OBS!
Endzeitgeist out.