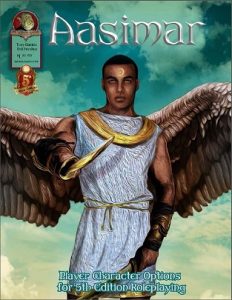 This pdf clocks in at 11 pages, 1 page front cover, 2 pages of advertisement, 1 page SRD, 1 page editorial, 1 page back cover, leaving us with 5 pages of content, so let’s take a look!

This is not the aasimar race from the DMG, just fyi – it’s its own take on the concept.

We begin this pdf with a pretty close reproduction of how races are depicted in the 5e Phb, i.e. with flavorful notes on playing the race and flavorful leitmotifs – from wanderlust to being trusting, but also verifying the statements and nomenclature. In a nice twist, elves, halflings and tieflings get their say and impressions of the aasimar race in a sidebar. Race trait-wise, aasimar increase Wisdom and Charisma by 1, 30 feet movement, darkvision 60 feet, resistance to radiance damage and a rather powerful trick: When being capable of healing via spells, you add your proficiency modifier to the amount healed; when you do not have access to those, you instead add it to the hit points you receive when you are healed. I like the intention of this, but the rules-language could be clearer: What constitutes, for example, an “healing attempt” – use of the skill? Personally, I think this should simply be a choice left up to the players. This is a nitpick, though.

The pdf provides three subraces of aasimar: Children of the deva increase Dexterity by 1 and get alter self at 3rd level as well as partial resistance to bludgeoning. Wait…what’s that? Well, partial resistance is a concept introduced here and I *REALLY* dislike it. In short: It works like damage reduction. You reduce that damage type by an amount equal to the level of the character. This renders partial resistance more powerful than regular resistance in certain contexts. E.g. at 10th level, a character is hit by 6 attacks, all of which deal 7 points of damage. Characters with resistance take a bunch of damage; less than other creatures, but still damage. Partial resistance eliminates the damage completely. The 5e-system is not made for this ability with an at least optional assumption of average damage and the somewhat more down to earth approach of 5e does not mix well with being invincible to certain attacks.

Children of Planetars increase Constitution by 1 and gain invisibility (self only) at 3rd level and partial piercing resistance. Children of Solars increase their Strength score by 1 and gain spiritual weapon at 3rd level. One note pertaining the innate spellcasting gained – the pdf fails to specify which spellcasting ability is used for these spells.

While I really hate partial resistance in 5e, the pdf does feature a second rule-idea I like – celestial lineages that allow you to modify the aasimar. A total of 3 such lineages are provided. These provide usually bonus abilities at certain levels (1st, 5th and 9th), but you do lose one of the usual abilities in exchange, namely powerful ones like radiant flux. Eternal Radiance nets you light-themed innate spells; bane of liars makes you a living lie detector and wings of angels provides slowly access to flight. I have no complaints regarding them.

The pdf does provide a new potion, celestial elixir, which allows the aasimar to use their powers an additional time before taking a rest; when used more than once, it causes Constitution damage, though…and it can be used as a quasi-super holy water that deals “6d6 damage” – for a price of only 100 gp. Underpriced in my book. Also…what kind of damage?? The pdf also features a new spell, radiant shield, which provides light, resistance to necrotic damage and reflexive radiant damage when attacked in melee. The spell is powerful at 3rd level mainly due to not requiring concentration and having a 10 minute duration. Angel’s Bows require paladins or aasimar to be used and grants advantage on attack rolls and deal +1d6 radiant damage….which is imho a bit strong. Universal advantage? OUCH. Also: +1 is usually, when compare with items like berserker’s axes, not noted in the header of the item. Oh, and the bow requires no attunement. (Fyi: My direct frame of reference here is the oath bow, which nets more power versus a single creature, but no bonus, requires attunement and works only against one foe per day. – in comparison, the angel’s bow is a bit too good.)

The ring of heavenly light, the second item, doubles darkvision range and nets daylight once per long rest.

Conclusion:
Editing and formatting generally are pretty good – the pdf does not feature significant glitches. Purists may be slightly annoyed that the racial subheaders aren’t italicized, only bolded, but the pdf gets the full-stop versus colon-formatting convention right. Layout adheres to a two-column full-color standard and the pdf comes fully bookmarked for your convenience.

Troy E. Daniels delivers generally a cool race here; while I am not sold on the balancing of bow and elixir and annoyed that the latter has no proper damage type, the aasimar race generally is cool…with one issue. Partial Resistance. This ability, while understandable in its intent, opens up a significant can of worms regarding rules-aesthetics and how the system works. To me, 5e is more rock-paper-scissors, than PFRPG and still allows you to do something if you don’t have the right tools. High-level aasimar with these rules can stand in a mob of lesser creatures armed in a specific way and take no damage…which opens up all manner of awkward questions – for example why non-aasimar angels can’t do the same. Basically, this introduces a rules component that is not tangential to a system – it’s an integral part. To maintain internal consistency, the introduction of the ability requires the GM to modify other creatures similarly, which changes the game pretty hard. On the plus-side, that makes direct PFRPG-conversion easier…but on the minus-side, it feels awkward and alien to 5e to me. Personally, I really dislike it and would discourage its use.

And that is a damn pity, for, overall, when disregarding this unfortunately pretty central component of the racial design, the aasimar as depicted herein is pretty solid; not perfect, yes, but also not inherently flawed or problematic. Still, partial resistance’s issues, in conjunction with the minor other hiccups do drag this down a bit. My final verdict will hence clock in at 3.5 stars, though I have to round down.

You can get this inexpensive racial supplement here on OBS!
Endzeitgeist out.