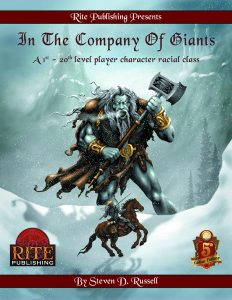 The 5e-conversion of the classic “Play a giant”-supplement clocks in at 21 pages, 1 page front cover, 1 page editorial, 2 pages SRD, 1 page back cover, leaving us with 16 pages of content, so let’s take a look!

If Jotunnar does sound Norse-flavored, you wouldn’t be wrong (their names sport the Icelandic suffixes of -son and -dottir, denoting “son of” and “daughter of”), but neither would you get the totality of the picture. Far beyond what other product lines offer in either 5e or PFRPG, we receive an in-depth look at culture and mindset of the race – which begins as Medium-sized and only slowly unlocks the true potential of their heritage. Philosophy-wise, the race similarly does take an unconventional stance – there are two dominant ways of thinking, with the first being called Vird. Vird would be pretty much a philosophy steeped in Norse morale – i.e. cherishing the value of bravery, being forthcoming and true, but this does not extend to traditionally “good”-coded concepts like mercy. Courtesies and proper behavior still are very important and the elaboration of the concept is enticing and well-presented.

Racial trait-wise, the race may either choose an increase of strength by 2 or the increase of both Con and Wis by 1. They begin play as medium creatures and gain proficiency in Intimidate (should be Intimidation) and Insight. They are counted as one size category larger for purposes of what they can drag, push, etc. Once per rest interval, the race may roll 1d12 + Con-mod as a reaction to being hit, subtracting the rolled number from the damage incurred…okay, so how does this interact with e.g. poisoned weapons and attacks that cause damage and add effects/conditions? Are these negated upon absorbing all damage or not? This is also as good a place as any to note that the pdf violates a lot of 5e-formatting conventions: Racial features are not italicized, for example. I’ll note a couple of these during the review.

The race also sports a jotun paragon class, which receives 1d8 hit points, proficiency with simple weapons, Strength and Constitution saving throws and two skills chosen from Athletics, Insight, Intimidation, Perception, Performance and Stealth. The class is missing the starting equipment choice and has no quick-build-rules either.

At 1st level, the class chooses an elemental power – one of the four elements and the associated energy with that element…you know, lightning for air, etc. Multiclassing, if an option in your game, is prevented until 6th level if you take this class…though the pdf does not classify whether this refers to total class levels or character levels. This elemental might manifests itself via powers chosen at 1st level, 3rd level and every 3rd level thereafter, with some featuring prerequisite feats, which is a VERY odd design choice for 5e. The rules language here does not help: “Some Elemental Powers have prerequisite feats, which are optional.” Optional and prerequisite? What?

Unfortunately, the elemental powers available are problematic. Dealing unarmed damage while grappling…is pretty underwhelming as far as potency is concerned. The power backbreaker, for example, is pretty much non-operational RAW: It ties Dexterity damage to grapples. On a nitpicky side, the wording employs the “opposed check” standard, rather than 5e’s “contested” phrasing. The requisite levels are weird as well – call lightning, for example, requires 5th level as prereq…and no power is gained on that level. The presentation of the spell’s DC and atk modifier is similarly weird and innate spellcasting-like tricks universally fail to account for casting at increased levels. Oh, and don’t expect the spellcasting-basics to be presented, as usual in 5e, at the front end of the respective ability. Similarly weird: Spellcasting attributes here change willy nilly. Call lightning? Wis. Chain lightning? Cha. WTF?

The wording comes absolutely and completely apart in the crush ability, which has a cool concept, but will not survive even casual contact with the table realities. These sub-abilities also are not properly formatted for 5e – 5e bolds and italicizes sub-abilities; see maneuvers, for example. This one italicizes them and adds a colon after them, where 5e uses a full stop. Oh, and guess what? Standard action. Yeah, I am not kidding you. The abilities also sport “daily uses” instead of 5e’s rest interval mechanics. Mentions action types that do not exist in 5e. Lacks average damage values. I’ll stop now. This whole section, which constitutes a significant part of the class, is BROKEN and needs fixing in both a formal and rules-perspective.

The class nets a natural armor increase of up to +11 (WTF???) and a scaling slam attack that scales up to 4d6, with 3rd, 10th and 16th level as well as 20th providing size increases – nice: The jotun paragon may reduce his size, so adventuring does not become highly problematic, though the verbiage here is a bit wobbly. Rock catching and wielding oversized weapons are included…and 19th level nets proficiency with martial weapons…which is odd to me, to say the least. The pdf also sports a significant array of feats. Ridiculously broken and non-operational: The ability to transfer magical weapon properties to natural attacks. Why? because RAW, there is no limit. The feat has no cap. You can transfer an infinite amount of these to your hands. *sigh* level-increases for ability/feature-purposes, daily uses, knocking prone sans save, feats that lack the maximum cap…oh, and the feats don’t have their benefits properly formatted. Urgh.

Editing and formatting are good on a formal level. On a rules-level, they are, unfortunately, BAD. As in: Several instances of non-operational pieces, copious pathfinderisms…you get the idea. Layout adheres to Rite Publishing’s classic 2-column b/w-standard and the pdf sport thematically fitting stock art. The pdf comes fully bookmarked for your convenience.

Seeing Steven D. Russell’s amazing jotunnar race suffer such in the conversion breaks my heart. The flavor of the race is absolutely amazing and inspiring, but as soon as we hit the rules, the pdf falls apart. The rules herein are littered with Pathfinder remnants, presentation deviates in plenty of crucial ways from the established 5e-paradigms and, as written, I can’t see the class working even haltingly without copious GM-fiat. The prose remains excellent and an inspiration, though – which also constitutes the only reason I could find to round up from my final verdict of 1.5 stars. I hope for a proper revision, the race deserves better.