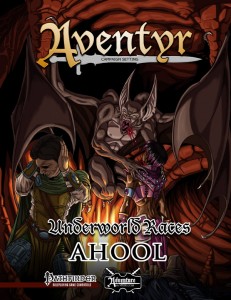 This supplement clocks in at 28 pages, 1 page front cover, 1 page editorial, 1 page ToC, 1 page SRD, 1 page back cover, leaving us with 23 pages of content, so let’s take a look!

We kick off this installment of the Underworld Races-series with an extensive history of the underworld’s genesis -a subterranean origin myth, if you wish – from the banishment of the infernal forces of HEL in earth’s core to the forging (and splintering) of the dwarven races to the rise and fall of the dracoprime and the arrival of the colloid (the contribution of your’s truly to the lore of Aventyr) , we get an interesting, well-crafted origin myth here, one supplemented by a full blown-table of age, height and weight tables not only for the ahool, but for all underworld races.

After this general overview, we delve right into the write-up of the Ahool -so what are they? Demonic interaction with mortal races tends to spawn new species -and thus, the Ahool were born and from these did spawn the ahooling -a race of blood-drinking, vampiric humanoids. Ahoolings get +2 Str and Cha, -2 Int, are monstrous humanoids, SR 6+class level, darkvision 60 ft, resistance 5 to sonic and cold, a natural bite attack at 1d4 as a primary weapon, get +4 to fly-checks thanks to vestigial wings (which can become full-blown wings via the racial paragon class) and suffer from light blindness.

Apart from their moss caverns, the race also receives a significant amount of favored class options, which generally tend to be rather cool and cover most of the classes. However, a glitch has crept here in the option for the fledgling ahool racial paragon class: The FCO specifies that the race receives +2 ft. fly speed, which needs to be increments of 5 ft to work – so far, so good. But weirdly, the FCO mentions that there’s no effect if it has not been selected 5 times, which contradicts how the FCO works movement-rate wise – so which is it? Minimum increments totalling 5ft or 10 ft.? Clarification would be required here.

We also receive two so-called racial archetypes, which essentially constitute of a select array of alternate racial trait-kits that can be applied to the ahooling – the Terrestrial and the Aquatic Ahooling – both receive change shape effects and alternate movement rates. Most interesting, though, would be the modularity that seeps into the racial paragon class – the racial archetypes influence the apotheosis granted by the class.

Now I’ve been mentioning this 5-level PrC, which nets full BAB-progression, good ref- and will-saves, d10, grants and increases fly speed up to 60 ft., 2+Int skills per level, +3 natural armor bonus and the class allows the race to learn to blood drain, receive claws as secondary attacks and also learns to unleash obscuring mists, gusts of wind and finally receive a kind of apotheosis towards being closer to a full-blown ahool. They also receive a couple of appropriate proficiencies and the option to unleash a limited amount of sonic blasts on foes..

The ahooling may also opt for the Ironsinger PrC, which nets a 3/4 BAB-progression, 1/2 fort-save progression, +5 natural armor bonus progression and also DR 4/- over the 10 level-progression. The class also receives d8, 4+Int skills per level and increase the damage output of the sonic blasts granted by the fledgling racial paragon class. Beyond an array of thematically appropriate spell-like abilities, dazing and staggering sonic attacks and a capstone that lets them force targets to save multiple times to evade the lethal sonics.

Beyond these options, we also receive a total of 7 racial feats to improve bite attacks, flight and swoop down on foes, inspiring terror or reading information from the blood of those they consume. Speaking with bats and gaining fiendish familiars is also covered here.

On the glorious side, a moss rope and net and bloodflow staunching moss make for cool alchemical items, whereas 3 magical items and 3 spells add further, nice options – throwing darts of obsidian that damage those without natural armor trying to use them, or the cool ahool crown make for neat items.

Editing and formatting are very good, I noticed no significant glitches apart from some italicization errors. Layout adheres to a drop-dead-gorgeous two-column full-color standard with rocky borders and awesome graphic elements, making this a beautiful, if not very printer-friendly pdf. The original pieces of full color artwork throughout the pdf are nice. The pdf also comes fully bookmarked for your convenience.

Mike Myler and Julian Neale deliver a great race that is high concept and intriguing – but alas, one that partially falls short of the great promise of the race’s concept – the revised edition has completely cleaned up the confusion of the ahooling’s flight and while the FCO-glitch persists, this greatly enhances one’s ability to use this race: First of all, unassisted flight no longer is generally available for the base race. Beyond that, while I do consider the base race’s racial traits a tad bit too strong, with especially the low SR being unnecessary, the fact that the race can’t lower the SR makes the playing experience interesting. We have a significant improvement over the first iteration of the pdf and while the race is a bit on the strong side, it is not broken per se. My final verdict will hence clock in at 4 stars.

You can get this nice racial supplement here on OBS!