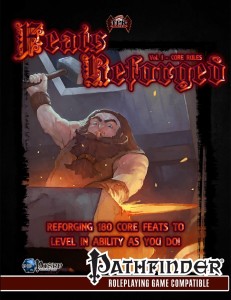 The first book of TPK Games‘ ” Feats Reforged”-series is 40 pages long, 1 page front cover, 1 page editorial, 1 page SRD, leaving us with 37 pages of content, so let’s take a look, shall we?

We all have encountered the issue – there just are some throw-away feats that simply become useless over the levels (or are useless in the first place and are only taken as a prerequisite for another feat or a PrC) – this is what this pdf seeks to change: Herein, we get the feats from the core-rules, reforged towards providing scaling benefits throughout the levels.

Let’s for example take the utterly bland +2/+2 to skill-checks group of feats. You know the feats I refer to. In TPK Games’ version, these feats get a new benefit at 7th level, allowing the character to 1/day reroll one of the skill-checks of the applicable skills and at 14th level, reroll both of them twice for a total of 4 rerolls – a more than solid benefit that makes these feats at high levels actually more useful than at lower levels. The crafting feats have the required time at higher levels cut down to by up to 20% depending on the feat in question. Cleave, for example, has its AC-penalty diminished over the levels and blind-fighting allows you to move blindly at more than half your speed without falling prone at only a DC 5 acrobatics-check and later completely omits said skill-check, though the benefit for the former fails to mention that it refers to moving blindly – but that’s admittedly a nitpick.

Combat Reflexes now offers a benefit of +1 to AoOs at 7th level, +2 at 14th and e.g. combat expertise also increases the doge bonus it nets by +1 on the respectively levels. Combat Casting sees a reroll at 7th level and a +5 bonus (instead of +4) at 14th level, whereas command undead increases its range to up to 50 ft. It should be noted that not all of the feats have two levels of improvement, with especially higher level feats usually netting only one improvement – Critical Focus getting a further +1 to atk to confirm critical at 16th level, for example. Some feats actually get quite a significant upgrade – Diehard gets fixed by first extending the amount of negative hp before you die by 5 and at 14th level, the feat also allows you to ignore the staggered condition for a round by incurring 5 points of damage. The idea of this latter ability is awesome, though I would have liked to see a caveat that no DR can mitigate the damage thus taken – otherwise creatures or characters with a DR x/- could potentially move without issues while staggered. Unfortunately, minor guffaws in the rules-language like this can be found here and there, though the latest iteration has cleared up many glitches, greatly improving the pdf – kudos to TPK Games! (For whomever it concerns: Here originally was a complaint about a glitch in the dodge-feat that has been rectified between draft 1 and 2 of the review!)

Conversely, another candidate among the throwaway-feats, endurance, gets a 1/day reroll and an increase to +5 – here, a more pronounced bonus would have been justified, but that may only be me.

Empowered Spells let you reroll one (or later two) of their damage dice, whereas extend spell allows for later extension of up to triple spell duration instead of double the amount – since metamagic feats per se count among the weaker options, these improvements imho add quite a bit to their value and make them work better – so kudos for that!

Extra channels, ki etc. nets you later a third channel/ki-point and then a fourth and extra mercy delivers one bonus mercy at 14th level. Long-range snipers using far shot learn to ignore the penalties of the first and later the second range increment and the fleet-feat adds another 5 foot and lets you keep your movement in medium armor at 14th level.

Improved counterspell may have ended up a bit on the strong side of things – allowing first a spell of the same school and level and later a number of spell-levels of the same school equal to the target spell to counterspell may be a bit much, but only a bit. A tad bit weird – Improved Two-Weapon Fighting’s iterative attack has its penalty reduced first to -3 and then 0, thus making the off-hand attack actually more effective than the attack with the primary hand as well as the iterative attack with the primary hand, breaking the rules for iterative attacks – not a fan of this design. Now non-monk users should rejoice at the reimagination of Improved unarmed Strike – at 7th level and later at 14th, the users of this feat now calculate their base-damage as if one size category larger, further increasing the damage output – though thankfully the feat can’t be abused – only the greatest of the possible damage die-increases is applied – no stacking for monks. Point Blank Shot also gets a slightly increasing bonus and more importantly, increasing range (first 40 ft, then at 20th level even 50 ft) – very good!

The redesign of Weapon Finesse should go conform with many a playstyle/house-rule out there: At 7th level, the feat as reforged herein allows you to substitute ½ dex-mod instead of str to damage with finesse weapons, whereas at 14th level, the full dex-mod can be used. Two thumbs up – dex vs. str balance is maintained and agile combatants still can deal a bit of additional damage. Vital Strike on the other hand still has an issue – the feat’s text is a bit ambiguous, stating “When you use the attack action, you can make one attack at your highest base attack bonus that deals additional damage. Roll the damage dice for the attack twice and add the results together, but do not multiply damage bonuses from Strength, weapon abilities…” It is clear that RAI the Str-mod is supposed to be added only once, but the text could be misinterpreted here to mean a double Str-mod to be added to the attack. A nitpick, yes, but a glitch nonetheless.

Editing and formatting are very good at this point – the first incarnation of the pdf had a couple of glitches, almost all of which have been purged.. Layout adheres to a crisp 2-column b/w-standard with ok b/w stock art. The bookmarks provided are only alphabetical, not per feat, which is a bit of a pity since the latter would have made navigation probably slightly more comfortable – perhaps nested in the alphabetical bookmarks?

TPK Games’ mastermind Brian Berg delivers us a pdf of reforged feats that succeeds at its given task of making feat-choices relevant over the course of multiple levels and even add sensible bonuses over the course of the respective levels. That being said, apart from the scarce few hick-ups here and there, this pdf does have one particular flaw in its basic logic: The introduction states that using these feats will not result in a balance-change if the adversaries also get access to them.  At least in my opinion, that’s a fallacy – some classes simply get a lot more feats than others and these classes are the true winners from implementing this system – feat-heavy classes benefit the most from this pdf. Taking a look at these classes, though, you’ll quickly realize why I’m not screaming brimstone and death right now – feat-intensive classes (*cough* fighter */cough*) are not necessarily the strongest of the bunch and a power-increase for them will probably not break a gaming-table, nor will the upgrade for the woefully weak metamagic feats hurt balance. Quite the contrary, they may actually become viable options. So yes, generally, I consider this a well-crafted supplement that delivers a good start of a massive relaunch of feats in general, one that makes me curious on how TPK Games will handle some of the utterly broken feats to come from books like Ultimate Magic and Combat.

Generally, this pdf can be considered a successful experiment, though one that has rough edges here and there – breaking iterative attacks with off-hand weapons, some minor missed chances to upgrade throw-away-feats…it’s scant glitches like these that keep this supplement from reaching the highest echelons of the rating-scale. Still, this pdf can be considered an interesting, promising start for the series, well worth 4.5 stars, rounded down to 4 for the purpose of this platform.

You can get this new take on feats here on OBS and here on d20pfsrd.com’s shop!