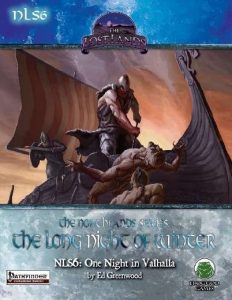 This module is intended for levels 12- 14 and is set in Frog God Games’ Lost Lands campaign setting. It can be run in another context/setting without any hassle whatsoever, provided Norse deities exist; its raw content clocks in at 14 pages, if you take away the pdf’s editorial, cover, etc..

So, Freyja has an issue: Guess what happens when immortal warriors and valkyries get horribly drunk each and every night? Bingo, their capacity for investigative reasoning…well, isn’t that developed. And lately, there has been strife among the einherjar, strife that can compromise the readiness for Ragnarök. Worse, souls that come to Valhalla are not yet einherjar before they have completed their feasting…and souls have gone missing. This is a troubling development and hence, the PCs are slipped some sacred mead…and as they slumber, ethereal, translucent forms emerge and manifest in FRICKIN’ VALHALLA. These spirit forms are immune to the dazed, exhausted, fatigued, nauseated, sickened and stunned conditions…unless they get voluntarily drunk. Yeah, you may notice that this module does undertake some interesting modifications to the standard rules that make the adventure at once REALLY hard and really easy – It’s easy because, upon being reduced below 2/3 of maximum hit points,, you’re “flung back” a room via an involuntary teleportation and healed of half current damage and half ability score damage. Slain PCs become specters that can contribute via passive skills and thus help their fellows before fading away – and no PC can truly be slain: Detah just equals waking up, guarded by valkyries, back in the mortal realms.

This makes the characters at once feel like immortal einherjar and really fragile and emphasizes another aspect:

This module, in essence, has satirical angles and could be seen as one prolonged puzzle. You see, einherjar drinking songs and dirty jokes are included and the behavior of valkyries is similarly codified in a concise manner…and the feasthalls of Valhalla, these gigantic edifices, are connected in a linear manner, with relatively few terrain-based obstacles – special note would deserve the vomit/excrement slop-buckets and fire pits, which the PCs should learn to use for tactical advantages- after all, they’re treading on the holy ground of their gods!

Their briefing is handled by Brunnaharr, the personal shield-maiden of Freyja…and the einherjar are not particularly cooperative: The PCs, in their interactions with them, have to *get* the mentality; craven behavior or groveling will get them nowhere – diplomatic aggression may actually be the contradictio in adjecto that best summarizes a valid strategy for success here – after all, the spirit-like shape of the PCs makes them suspicious to the mead-addled minds of the revelers!.

Beyond the social tasks that have to be roleplayed for true success, the PCs will have to e.g. pass Geri and Freki. No, I am not kidding you. And yes, they are brutal. And, once again, yes, killing them is a bad, bad idea. Have I mentioned the hall that has been infiltrated by draugr? Or the chance to interact with none other than Mímir and trade riddles? The encounters, in spite of the identical nature of the festhalls per se, are what makes this module in conjunction with its unique rules for mortals in Valhalla – this is very much a roleplayer’s module and each combat herein, to some serious extent, has a tactical angle, feels like a little, unobtrusive puzzle. I love that! Ultimately, the PCs will find agents of Hel, Ganglati and ganglöt, shielded from the eyes of deities and if they manage to best these powerful foes, they may in fact leave this module with a powerful favor of the valkyries!!

Ed Greenwood is a legend for a reason. There. I said it. I am torn on quite a few old-school adventures, but this encapsulates perfectly what makes them work: Surprising amount of detail and a bit tongue-in-cheek, this module highlights aspects of Norse myths that usually are buried beneath hero’s pathos. The unique spirit rules reward the PCs at once for their bravery AND emphasize the brains over brawn aspect, which renders the plaiyng of this module a rather unforgettable experience. Now yes, I would have very much preferred different maps for the different feasthalls, but that, ultimately remains a minor hiccup. It’s uncanny once you stop and think about it: This module features linear rooms of the same size and general layout; it *should* be boring and unrewarding.

It’s quite the opposite. This is incredibly entertaining, challenging and not for the faint of heart: Sure, PC lives are not at stake, but oh boy does the teleport makes things TOUGH. Unless your players are good at non-conventional problem-solving (read: Not bashing everything’s brains in), they’ll be in for a world of pain. As they should be. This is funny, challenging, awe-inspiring and epic in the right ways. Well worth 5 stars + seal of approval and one of the modules from the series that I consider a must-have, alongside “Winter’s Teeth” and “Oath of the Predator“.

Prefer old-school? The OSR (S&W)-version can be found here!