The Genius Guide to Hellfire Magic 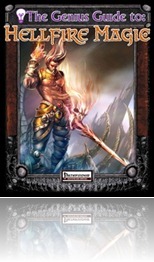 This pdf from Super Genius Games is 16 pages long, 2/3 of a page GORGEOUS front cover, 1 page editorial/SRD, leaving 14 1/3 pages of content for Hellfire magic, so let’s check this out!

So what is hellfire? Essentially, it is a new spell-descriptor that is not inherently evil, but constitutes the usage of hellfire, the force that has been used by the gods to create the lower planes and which has been tainted over the years. While not inherently evil and even available to the likes of inquisitors, hellfire spells can be cast with the [evil]-descriptor in order to make them stronger, but at the same time slowly subverting a souls resolve and tempting them towards evil… “This is the life, you see – the devil tips his hat to me…” Furthermore, hellfire does not always produce fire-damage, unless specified.

After an extensive selection of spell-lists including classes like the Antipaladin, we delve into the new hellfire spells: And spells herein make for iconic tools of punishment: Ever wanted to create a lake of acidic fire? A lash to castigate sinners? Or even duplicate ANY conjuration (summoning) or conjuration (creation) spell? Forge hellfire fits your needs. And for just a sliver of your moral integrity, the spells can produce more real versions of creatures and objects… A version of minor creation, fashion sinister trifle, enables the discerning diabolist to conjure up minor tools – because digging up graves is just so much more fun with a spade fashioned from hell itself than with one from Brady’s friendly convenience store. Oh, and the purchase can’t be traced to you by those nasty adventurers…

Want to truly punish your foes? Send a plethora of deadly bolts of hellfire (acid, electricity and fire damage in one attack) that has the potential to deal attribute damage via soul searing – essentially, this 5th-level spell is rather close to the blasting capacity of a warlock – for 1/min per level, you can assail foes via these bolts. Very cool! Even cooler: If you’re not contend with force cages, you can now imprison foes in their very own pocket hells – if cast as evil, you can even visit them inside. Oh, and you can make this one permanent for a rather satisfying, but expensive way to get rid of foes.

The true winners, though, are the often neglected witches, who get a new major hex, Planar Torment, which can be used unlimited times against outsiders. They also gain two new grand hexes, Hellfire Gate and Scion of Hellfire: The former is a more precise (and cooler) form of plane shift, while the latter lets the witch infuse her hexes and spells with hellfire, changing types between fire, half fire, half acid and half electricity half fire. Very cool and suitably more powerful than the corresponding feat.

Editing and formatting are very good – although I noticed some minor glitches like superfluous tabs, they did not impede my enjoyment of the file. The pdf’s layout adheres to SGG’s 3-column standard and provides some pieces of truly BEAUTIFUL full color artworks. The pdf has no bookmarks. From the basic concept to the spell-lists and the innovative spells as well as the bonus-content, I have NOTHING to complain. The fact that PCs can cast the spells with the [evil] descriptor and gain additional benefits is just awesome and I’m wondering why no one else has done something similar before. My only true gripe with this pdf is, that I want MORE hellfire magic. The potential is vast and a full-blown sourcebook of hellish options would be much appreciated! Thus, my final verdict will be 5 stars and the Endzeitgeist seal of approval. Excuse me, I’m now going to ride a black unicorn down the side of an erupting volcano!

The Genius Guide to Hellfire Magic is available from: