One Waiting, One Prisoner, One Sacrificed (OSR)

One Waiting, One Prisoner, One Sacrificed (OSR) 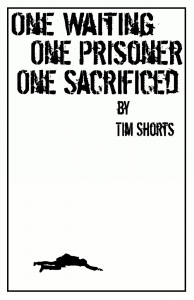 This adventure clocks in at 21 pages, 1 page front cover, 1 page editorial/ToC, 1 page advertisement; each of the three chapters has its own sub-cover page, which means we arrive at 15 pages of content, laid out for 6’’ by 9’’ (A5), so let’s take a look!

All right, structurally, this is one narrative that was released in 3 installments by the Gothridge Manor patreon; the three chapters each represent a nice mini-adventure, and depending on how fast your players are, you can potentially finish the entire module in a single, long session. Unlike many multi-part adventures, the different chapter manage to retain their own, concise themes while still gelling together as a cohesive entity.

Now, in case you’re new to GM Games, it should be noted that the tone herein is one of somber dark fantasy; Tim Shorts has a gift when it comes to depicting the small and large shortcomings of human(oid) beings and their consequences. Much like e.g. the Witcher games, there is no moralizing, no raised index finger. It should be noted that this module does include a kid that the PCs can’t save from death; if that sort of thing rubs you the wrong way, you can pretty easily modify the adventure, though. The module is pretty much a dark fairy tale, and captures the themes of the stories I grew up on rather well.

As far as rules are concerned, we have Swords & Wizardry (S&W) as the default rules-set here. Formatting of rules-components does deviate in some aesthetic components from the defaults. The module sports no read-aloud text. Each of the 3 parts of the adventure comes with its one map – the first and second adventure sport a hand-drawn full-color map, while the third sports a side-view b/w-silhouette of a tower. I really like that the maps look like the thing they are – hand-drawn. It’s rather charming. I am less enamored with the fact that there is no way to get rid of the annoying numbers on the maps – no player-friendly version has been provided. The maps of the first and second adventure lack grids and scale; the third one has a scale that designates the height of the complex, but not the width. That being said, the maps don’t really hamper the use of the adventure.

All right, so, this module has no suggested level-range for the party: Mid to low level makes sense, but the difficulty of the adventure ultimately hinges on how smart your players are; this is very much an old-school adventure, in that player-skill trumps character skill. The final boss is a pretty tough cookie, though – 6 HD, and a bunch of immunities versus weaponry means that having an arsenal of damage-causing spells is a must. This is the primary reason I’d recommend running this module no sooner than 3rd level, unless you really want to challenge your players with a brutal final fight. Most groups should consider this to be a module best suited for levels 4th – 5th.

All right, only GMs around? Great! So, a few days ago, on the celebration of the summer solstice, a group of 3 children went off in search of adventure, finding Denizon’s Folly – the ruin of a tower that was never completed. The ruins of the tower and the burned-out houses there represent the first investigation angle – and indeed, there are strange things going on – sentient specks of light drift hazily through the burned-out shells, subsisting on memories, and indeed, a fey trickster may also be found. Sage plants growing in a circle make for a cool twist on the access point to the fairy realm; with an apple in hand, entering will lead you there. If the players are stumped, the trickster’s thievery may provide a hint there.

The second part of the adventure takes place in the realms of the fey – it is essentially a mini-hexcrawl through the fey village of Osmolt. The is a chaotic means to manipulate time (which courageous players may attempt to use to save all children, but that as an aside that is per se not explored within), and the region per se is chaotic: A table lets you determine fey type, information they provide and mood the fey’s in, and the pdf pretty much does an impressive job here – the angle is weird, and the randomness of the whole information gathering fits the fey well. There also is the eponymous Osmolt, a very potent green man, and a roc. Yeah, you heard me. This section is where murderhoboing will get the PCs TPK’d faster than saying “Roll 3d6, 6 times, in order.” Like it! You see, the fey are frightened – they are currently holding one of the kids, Pauline, imprisoned at the command of their new overlord, the vile redcap Blaspheemus. And yes, the name’s a bit cringy, but it fits the redcap and fey angle. One more problem – Pauline, even if saved, can’t expect a happy end. She has aged physically to become a young adult, while mentally, she is still a little girl…and the village-dwellers will not abide the feytouched among them. I liked seeing this angle – it is a chance for the PCs to be surrogate parents…or true heroes, not just a group of killers with pointy sticks.

The third part of the module deals with Blaspheemus’ tower, a weird edifice overlooking the churning sea of mists. The tower is guarded by the two-headed hellhound Char and Sid, and ina  unique angle, the tower is highly vertical – inside, you can walk on all walls, knockers seek to defend their valuables, and the PCs may encounter a horse running on the walls – an illusion given shape, which can cause confusion. The tower is pretty dangerous, including effects that can blind people, teleportation ioun stones that teleport your hand away…and what about the actually pretty competent non-combatant goblin chef? A massive d100-table of Blaspheemus’ loot is included here as well. Speaking of whom: The redcap is a brutal boss – he not only has excellent defenses, he also has a tricky magic item (that works only n the fey realm, so no, the PCs won’t be able to capitalize on it) – and in the end, the PCs will have a hard task, for within this 100-entry table, his keys are hidden – and slaying the redcap will cause the tower to collapse pretty rapidly. The PCs will need to find the keys to release the traumatized Alice, the second of the kids who’s still alive, and escape with her from the tower.

Editing and formatting are not good – “abandon” where “abandoned” should be and similar typos can be found throughout. On a rules-language level, I have, thankfully, not encountered serious issues. Layout adheres to a one-column b/w-standard with no frills. The cartography is per se nice, but, as mentioned before, doesn’t have player-friendly components. The pdf sports no bookmarks, which is an unnecessary comfort-detriment.

I really, really enjoyed Tim Shorts’ dark fantasy fairy tale here. It hits the right notes, and while its formal criteria aren’t perfect, this is certainly a module I’d consider to be among his best. If you can look past the formal hiccups, then you’ll get a rewarding dark fantasy fairy tale here, one with a surprisingly well-crafted atmosphere. Formally, this is, at best, a 3.5 star-adventure, but I genuinely found myself enjoying this adventure, and if you value atmosphere over perfection, then this will provide a fun adventure for you. As such, my final verdict will be 4.5 stars, though I can’t round up for it.

You can support the Gothridge Manor patreon here!

If you’re enjoying my reviews, please consider leaving a donation or supporting my patreon. Thank you.