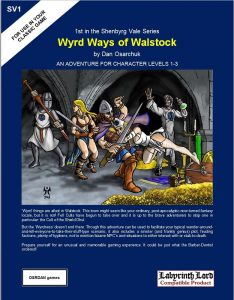 This module clocks in at 32 pages, 1 page front cover, 1 page editorial, 1 page SRD, leaving us with 29 pages of content, so let’s take a look!

So, one of my patreon supporters asked me for a funny module, and I asked them whether their group had a seriously pronounced sense of gallows humor. They replied in the affirmative, and thus, I moved this module up my reviewing queue.

Important, considering the timing: This is a satirical module that is rather scathing, with the main topic being the costs associated with healthcare. If this is not something you can take right now, then skip this. If, however, gallows humor is comforting to you, then read on.

This is the first, and so far only module in the Vale of Shenbyrg-series, and it takes place in the eponymous village of Walstock. Setting-wise, this feels at first like a slightly gonzo fantasy setting, but from a GM’s perspective, it champions the post-apocalypse-turned-to-fantasy trope; if this is something you and your players don’t like, beware.

Mechanically, the module makes pretty extensive use of the mechanics of Casting Rolls introduced in the Divinities & Cults-books released by the author, but I do not own said books, so checking the validity of the implementation is hard. You do not, however, require these books, as the module does offer an easy to implement alternative solution for the effects on the global mechanics in the book.

The OSR-system of choice here is, just fyi, Labyrinth Lord, though the aesthetics also fit DCC – which the author seems to have realized, as we can encounter, among other things, gong farmers. Slightly annoying: There are some formatting deviations from labyrinth Lord’s conventions. I recommend this module for groups of 5-6 players of 1st level, or higher – up to 3rd level should go rather smoothly, with the usual scaling, if needed. The party should definitely be a well-rounded one, for the module is dangerous: Additionally, it should be noted that the module does demand quite a bit from the players as far as skill is concerned – it is essentially complex sandbox with an investigation plot. I firmly recommend that only veteran groups try their hand at this, for this is not a simple module to beat…or run, for that matter. On the plus side, even veteran investigators will need to think here: If most investigations seem trivial to your group, this may deliver what you crave.

The module does include a background generator for Walstock that includes 5 different motivations, some of which do come with sub-sections. Sub-generators for families that are not the big three are provided, and we get a d12-based generator that lets you generate relationships between people – descriptor, relationship and blood relationship. D10 tables for random encounters are provided for day and night (as well as for other regions), and we get a pretty massive Walstocker generator to make stock NPCs seem, well, not like stock NPCs. The maps within are generally functional, but don’t sport much in the vein of details, but do come with a grid etc. They lack a scale noted.

There is one more thing about the maps, which should be noted, but in order to do that, I need to go into SPOILERS. Potential players should now jump ahead to the conclusion.

All right, only referees around? Great! So, there are tunnels beneath Walstock, and they are pretty massive. However, how the tunnels and town interact can be a bit annoying for the referee: Some outlines of buildings on the tunnel map would have helped there. Don’t get me wrong: The module does list entrances etc. rather well, but considering how basic the maps are, this’d have been a low-effort way to make them more useful and enhance their utility. Speaking of annoying: The module’s maps feature no player-friendly versions.

So, I mentioned this was a satire, right? Well, tere are three particularly prominent families herein, the Trenchaus (upper class), the Kiblerman (middle class) and the Torchenorff (lower class) – all are seriously funny sketches of the clichés: The Torchenorff’s favorite dive, for example, is called the Pigsty, and Torchenorffs and Trenchaus are quarreling rather prominently. As befitting os a post apocalypse turned fantasy, Walstock is ruled by the cult of R’ti (XD), the demon lord of educational and bureaucratic insanity. There also are the churches of Tyr and Minerva, with the latter deserving special mention: The adherents of Minerva are super prudes, and become magical girl-style superheroines at night – like Temperance Girl, or Madame Shadow (write up sports a typo that refers to the name of Lady Light instead), who engages in interpretive dance throughout the night. Mighty Virgin pummels any men who’d dare show her affection, and Maid of Justice, who is , like the others, kinda psychotic and a hypocrite. These are all properly stated and make for a hilarious series of encounters – particularly if the PCs can figure out some of their less consistent behavior patterns. Meat bounties, hidden temples of Unharmonia…and did I mention the dietician? Visits may be risky, but dare you try following the secret elf’s counsel? (Non-humans are better explained as simply oddly shaped humans here…)

All of that, and much, much more, is simply here for the sandbox level of play – but there is actually a perfidious plot going on, and it is a complex one that involves blackmail, facilitating the outbreak of disease, incited riots, and a combination of deaths by riot and assassination that coincides with a mighty ritual – unless stopped, this complex and rather hard to unearth conspiracy will put the adherents of the Shield-Ghul, the second most powerful cult, in control of the town.

These fellows btw. are responsible for regular healing not working as well as it should (aforementioned global effect suffusing parts of the town, which will be increased if the cult can finish the aforementioned ritual…), and include barber-dentist/Assassin Dr. Chohmps. The Shield-Ghul is a Lawful Evil Arch-devil of Ill Healing, Tyranny, Waiting, and Cost. Cult edicts are provided. They can turn regular healers and those looking for refunds, and their healing takes TIME. 1d20 turns to ever show up. And then you roll a d12. The patient can well die here, or might need to fill out more forms, or something else must be found, etc. Oh, and healing costs 1d10,000 gp. Divine tests listed include physicians needing to pay exorbitant sums, and Assurance (insurance) peddling on others is, of course, also party of the deal. In short: Just because you serve the shield-ghul doesn’t mean you fare better! As you can glean from this topic, we also have a pretty massive hospital (fully mapped) staffed by the shield-ghul staff. And you probably realized that the whole spreading of sickness angle is designed to drive the entire town deeper into debt… Did I mention that the blackmail theme is rather subtle, or that the mail service of the town (!!) is actually involved? The timeline for the plot spans only 3 days, which can render this module a rather tough cookie to beat indeed.

If the adventure has a single weakness on a narrative level, it’s that it doesn’t really offer a good way to jumpstart the adventure. It is cognizant of not being a hack-and-slash scenario, and is genuinely clever, but unless your players and PCs are already motivated to look for the adventure, they may well miss out on some, or even most of it. As a pet-peeve of mine, there is a single save or die monster herein, and those foolish enough to seek the help of the shield-ghul’s adherents have a low chance of dying sans save, but then again, that is reaping the seeds of bad decisions. Did I mention that the shield ghul’s fashioned after the Caduceus, and as such, a massive ghul serpent is a kind of boss herein? The vampire who has forsaken trying to control the village in favor of blood drinking and lovemaking, since it’s just too wyrd a place? This book brims with these short tidbits in creature and location design, these small set-pieces, that are both charming and help making the place feel alive. As strange Walstock is, it follows its own, twisted logic.

Conclusion:
Editing and formatting are good on a formal and rules-language level – while not perfect in either, the module can be run with what’s provided sans stumbling. Layout adheres to a no-frills two-column b/w-standard, and the module sports comic-style b/w-artworks. These are okay, but nothing to write home about. The cartography is functional, but sports no details, and unfortunately lacks player-friendly iterations. Annoyingly, the adventure lacks bookmarks, which renders navigation a chore. Since you’ll need to cross-reference and use markers to properly run this, I strongly suggest printing out the module.

Dan Osarchuck’s “Wyrd Ways of Walstock” is a genuinely funny module, and particularly right now, its dark humor will hit close to home for many, but perhaps this is just the time to actually engage with the themes that this adventure satirically puts in the game’s context.

The blending of laughter with serious themes can help quite a few people cope with situations that’d otherwise seem overbearing.

On a formal level, I genuinely like the complexity of the plot of the antagonists, and that it really demands that the PCs do their job properly. Getting a better hook to rope them into the fact that something’s afoot, though, would have imho enhanced the module. Particularly, since the village’s high wyrdness-factor can easily bury the plot in a plethora of sidequests, strange occurrences, etc. – there is so much going on, it’ll take serious skill to sift through all the unrelated stuff, quirky characters and red herrings. On a formal level, the module fares worse, with the lack of bookmarks and player-friendly maps representing serious strikes against the adventure.

And yet, as a whole, I consider this to be a success – we have a good, darkly-funny adventure here, one that embraces the absurdity of real life systems and puts its finger, like a ghul surgeon, where it hurts. Unlike the victims of these devil-worshipers and systems, though, you might get a laugh and a good time out of this. My final verdict will be 4 stars.

If you’re enjoying my reviews, please consider leaving a donation, or joining my patreon here! Every bit helps!