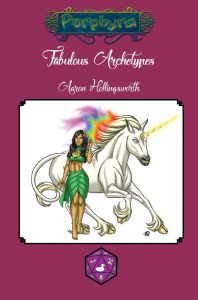 This pdf clocks in at 13 pages, 1 page front cover, 2 1/3 pages of SRD, leaving us with 9 2/3 pages of content, so let’s take a look! It should be noted that the pages are formatted and laid out for a 6” by 9” booklet standard, which means you can fit up to 4 of these pages on a given sheet of paper if your eyesight is good enough to cope with the letter-size.

We begin with a brief Yeats-quote as well as a short definition of what “fabulous” means within the context of this pdf before moving on to the unicorn rider cavalier archetype, who is locked into good alignment and a properly statted unicorn mount companion. (As a minor complaint from someone who has spent too many hours playing Robot Unicorn Attack’s metal-version – pity, I wanted black unicorns…). The archetype comes with its own order, which is set apart by the unicorn choosing the rider. Edicts etc. are concisely defined and Perform and Survival are added, class skill-wise. The order also adds Charisma modifier in addition to Wisdom to the DC to avoid being demoralized.

The next archetype would be Feyfriend, which can be taken by both druid and ranger, since it replaces the regular companion with a fey friend, thus replacing nature’s/hunter’s bond, respectively. Scaling is based on the druid-levels, which retains balance in the ranger’s case. The feyfriend scales up to 16 HD, has 1/2 save-progression for all saves, 6 + Int skills and learns up to 8 feats. Additionally, the fey friend gains a +2 dodge bonus to AC at 3rd level, increasing that in increments of +2 every 3 levels thereafter. Analogue to this, 3rd level yields +1 to Dexterity and Charisma, increasing the value every 3 levels by a further +1 each. Level 1 yields link and share spells, level 3 nets evasion and 15th level improved evasion. Ability score increases are gained at 4th level and every 5 levels thereafter, excluding 19th – here, the ability score increase is instead delayed to 20th level. 6th level nets a +4 morale bonus to Will-saves.

The main draw, however, would be the SPs gained: The feyfriend begins play with a cantrip SP, unlocking one for first level or lower at 3rd level and gains more SPs every 3 levels after that, unlocking a new spell level every time. The SPs are governed by Cha and HD and the feyfriend must chooses, bard, druid, witch or wizard for the SP-selection. Big plus: 3/day limit for non-cantrip SPs. I see quite a few of you rolling their eyes right now – yes, this is potent. However, the feyfriend is diminutive and only has d6 HD to show, which does act, at least somewhat, as a balancing tool with the rather weak base frame. Still, the lack of tricks-requirements does mean that the chance is pretty high that you’ll gain more out of the feyfriend. I wouldn’t allow it is gritty campaigns, but in standard fantasy, you shouldn’t encounter significant issues, considering the fragility of the fey.

After this companion archetype, we move on to the flower child druid, who may not be evil and adds Diplomacy, Knowledge (local) and Perform to her class skills. They lose all weapon proficiencies except for one simple weapon of the player’s choice. The archetype gains +2 to Diplomacy and Perform and may retry a botched attempt to sway opinions a second time prior to the 24 hours elapsing. Instead of wild empathy, they may cause their elemental damage-causing spells to inflict nonlethal damage and they increase their CL with nonlethal damage causing spells by 1. The archetype is locked into a domain choice from a list as a replacement of “nature bond”. As you can see, there are a couple of minor typos here.

The Ensorceller mesmerist is up next and may cast spells sans spell failure in light armor…and yep, these guys cast arcane spells instead. Instead of the mesmerist tricks gained at 2nd, 4th, 10th and 16th level, the archetype receives access to a bloodline chosen from a limited array. Instead of touch treatments gained at 3rd, 6th, 10th and 14th level, the archetype gains scaling bonuses versus gaze attacks, with 14th level providing immunity.

The Holistic would be an unchained monk archetype, who replaces Intimidate and Knowledge (history) with Craft (alchemy) and Heal. Instead of stunning fis, the archetype adds +1/2 clss level as a bonus to Heal checks (skill reference not italicized here). 2nd level yields joint cracking, replacing the bonus feats gained at 2nd and 6th level: Pretty cool: the archetype can, as a standard action, suppress Str or Dex damage from a willing ally, with the amount increasing from 1d4 to up to 2d6. And yep, an ally may only benefit once per 24-hour interval from it. I really like this, idea-wise!! Holistic tea is cool: Requiring the use of an “alchemy kit” (should be “alchemist’s kit”), the character can brew tea – by also expending ki, they may make the tea heal living creatures, replacing the ki powers gained at 4th level and every 4 levels thereafter – instead, the healing capabilities increase on these levels. Like it! 13th level yields aromatherapy, 3/day mass cure light wounds as a properly codified SP. The rules are solid and work, but teh ability should probably be SP, not SU. Oh well, that one’s cosmetic.

The final archetype herein would be the jolter wizard, who gains 4 + Int skills per level and an expanded class skill list that includes the physical skills – you know, Escape Artist, Stealth, Climb, etc. The spelljolter can expend a spell as a swift or immediate action to grant himself a bonus to said aforementioned array of physical skills. Additionally, he may, as an immediate action, grant himself the bonus to Reflex saves, replacing arcane bond thus. Instead of 5th level’s bonus feat, the archetype can expend spells as a swift action to grant himself a dodge bonus to AC equal to the spell’s level, for 1 round. Instead of 10th level’s bonus feat, he may now also use spelljolt to fortify his Fort- and Will-saves. Really annoying, though: The archetype uses a “magical bonus” for all but the AC-bonus. Know how many bonus types we have in PFRPG? Why not use one of them?

Cool, btw.: The pdf comes with a bonus monster pdf penned by Mark Gedak, the CR 2 meadow maid, a flexible angel that may seem fey-like and is drawn to idyllic pastures, carrying a consecration aura around with her – nice critter!

Editing and formatting are very good on a rules-language level, good on a formal level – apart from some minor & cosmetic hiccups and a few typo-level glitches, I noticed nothing glaring that would compromise the content. Layout adheres to PDG’s 1-column standard for 6” by 9”-sized booklets and the pdf has no artworks apart from the cover. The pdf comes fully bookmarked – kudos!

Aaron Hollingworth’s fabulous archetypes area generally well-crafted lot – in particular the holistic is REALLY cool and adds a whole new dimension to the monk class that makes SENSE. The concepts and their representations are solid and well-made and the spelljolter sports an interesting playing experience, in spite of its brevity. While I was not utterly blown away by this humble pdf, when one considers the low and more than fair price-point, this most assuredly is worth getting, particularly if the holistic or riding a unicorn interests you. The bonus critter adds even more bang for your buck, which makes this a nice offering. As a whole, I will settle on a final verdict of 3.5 stars, rounded up for the purpose of this platform.

You can get these inexpensive, nice archetypes here on OBS!