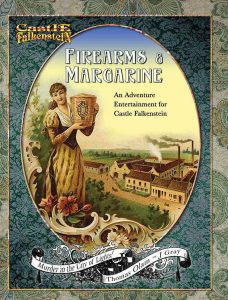 This module for Castle Falkenstein clocks in at 44 pages, 1 page front cover, 1 page editorial, 1 page ToC, 1 page back cover, leaving us with 40 pages of content, so let’s take a look!

Before you’re asking: Of course Captain Thomas Olam is returning as the framing device for this adventure, with the esteemed Mr. J Gray acting as the transcriber of his notes. It should also be noted that the adventure comes with pregenerated dramatic characters – 6, to be precise. In a rather nice manner, the module collects the game-relevant stats on a few pages – but goes one step beyond: In the back, extensive, char-sheet-like depictions of the characters, complete with proper space for notes and even b/w-photographs depicting them can be found, enhancing the immersion. I strongly suggest handing these out to players when running it and not using the dramatic characters. You see, the German iteration of CoC uses period piece photography extensively and it does enhance immersion, so kudos for doing that!

We also get a massive city map of Paris, where the proceedings take place, in the pdf – both with a player-friendly iteration and one for the host, which contextualizes and places the adventuring locales. That being said, I do have a very minor gripe here, one that does not in any way impede the functionality of the adventure at hand, so consider this just me being a scoundrel: The city map as a physical artifact from the time must have been HUGE and as such, the one-page scans make reading streets-names etc. impossible. Now note that this is not required: The city map is here to put the adventuring locales in relation to one another, but as someone who really enjoys old maps, a high-res iteration would have been amazing. (And yes, quite probably, there is no such scan, but one may dream, right?)

Anyways, ladies and gentlemen, I’d like to humbly ask you to excuse my digressions, so let us adjust our pince-nezes, put down our walking sticks and fans and take a look at what this recent account of Captain Olam has to offer. It should be noted that only the most dastardly rogue, tarnishing the good graces of the house of the Host of his regular game, would continue to read the following if he (or she) planned to attend the game wherein the proceedings depicted in this module take place. As the profane rabble is wont to say, from here on out, this review will contain copious amounts of SPOILERS.

Dear hosts, are we alone? Have all preening eyes, all scoundrels and spirits departed to their respective haunting grounds? Excellent, so let us commence with our discussion of the matter at hand! As we all know, this is an enlightened age that will catapult our species to realms heretofore unimagined and at the forefront of one such foray in the advancement of our glorious civilization would be the gentleman known as Martin Hoog, currently approaching the completion of his margarine factory, which will undoubtedly revolutionize significant aspects of our customs. However, as we all know, progress not always goes unopposed, and to the obvious concern of dairy farmers in the rural areas, we have to add the unfortunate sentiment of the brownie population – after all, it does seem like the machines will manage to even outdo the Faerie’s vast working capacity.

The leader of this resistance, in case you were not aware, falls in this particular case to the Fae lady usually referred to as Danielle Bendit, and appropriate name, if her detractors are to be believed. The current state of affairs has her and her rabble preventing the opening of the factory. The protest has been going on for a couple of days, with no real progress on either side, as the authorities in their wisdom have to prevent a proper escalation of the proceedings. There are, of course, plenty of justifications for proper ladies and gentlemen to bear witness to the horrid proceedings that are about to unfold, but it should be noted that, if all else fails, one should not discard serendipitous coincidence as a means of getting the proper minds involved.

It is my sad duty to announce that there will be an incident most unfortunate, for, as Mme Bendit and her right-hand man Michel are about to announce the strategies of their further protests and the goals of their fledgling movement, a shot will ring – and provide the first decision, which only the cool heads of those of proper breeding and accomplishment may make: Whether to hound the assailant sniper or to move towards the stage and offer educated help; the chaos of hundreds of fae dispersing into the ethereal and panicked protesters fleeing the scene makes both endeavors rather complicated.

The office, from which the shot was fired, unsurprisingly yields a mystery – very perceptive characters may note signs that the window was kept open, an orphaned rifle with a scope awaiting – and particularly learned characters may deduce the “how” of this dastardly attack: The rifle was prepared by a devious mechanical mind with one of these fancy cells pioneered by Edmond Becquerel in 1839, firing as the fog cleared and light touched it.

At the same time, more compassionate characters with a less analytic bent (we shall not engage in the obvious associations here) may have moved towards the stage to find Michel, murdered in the arms of Mme Bendit, shot by cold iron – and as he lies there, only the most astute of characters will have a chance to collect further evidence before the poor creature suffers the Final Death, shortly before the griefstruck Mme Bendit is spirited away. Those among you illustrious hosts who fear that the obvious murder mystery here would be solved too easily by the inclusion of a certain order of thaumaturgical detectives should rest assured that proper guidance is provided to deal with such potential hindrances in a manner that if befittingly fair for dramatic characters.

Unless our valiant cast has split, the characters will hence have one primary lead, though one should not be remiss to mention that the arrival of the police force will put an end to the investigation of the scene of the deplorable crime. Recognizing the obvious potential for conflict inherent in the situation, and listening to their own valiant hearts and nerves of steel, our illustrious cast hence moves on to question the diverse beings involved in this most puzzling of cases – and here, the classic adage of truth, smoke and mirrors is indeed one that should prove true: The investigation of anarchist involvement and the grieving Mme can yield a surprising variety of rather intriguing clues. Astute individuals, examining the less than trustworthy guards employed at the factory as well as Mr. Hoog himself may even deduce a rather scandalous development and situation, though ultimately, not even that should suffice to coax veritas from the cloaking shadows – indeed, the potentially risky involvement with the préfet de police may proceed to escalate to a duel, though the puzzling demeanor exhibited here by the préfet can be considered to be another piece of this puzzle…or can it?

Indeed, the investigation of the proceedings can unearth a rather puzzling painting predicting the murder – precognition? Perilous premonition? Indeed, the colloquially so-called “red herrings” that are cleverly woven throughout this adventure render both murderous motivation and precise procedure of the dastardly deed a subject suitable for the magnificent minds that you, dear host, elect to entertain. Various ways can lead to the unearthing of the true culprit and the aftermath of the assassination will be strongly influenced by the astuteness of the minds involved – and yes, dear host: Much like any good mystery, there are multiple meandering ways to arrive at the elusive poodle’s core, with the supplemental storylines and their conclusions allowing for the concise expansion and continuation of the adventure.

Who is responsible? How was it done? Why, my dear readers – that is only for the distinguished host to discover! It is my duty to mention in this context that the dramatis personae of this curious constellation of characters comes with the appropriate contextualization within the rules of the game. Those of us who enjoy the winding ways of history will be overjoyed to observe that Captain Olam’s elaborations of the discrepancies between our world and his curious home have returned. Furthermore scholars of the Fae will most assuredly like the details provided for the Teuz, the brownies most commonly encountered in the Bretagne.

The all too often thankless tasks of proofreader and editor have been fulfilled to my utmost satisfaction. The visual presentation of the subject matter at hand adheres to a 2-column standard, set against a beautiful, colored backdrop. The artistry of the photographs, portraits and paintings herein, taken from the vast treasure-trove of our species, serves well to enhance the consistent feeling of this book. Should you prefer one of these magical presentation methods, rest assured that more bookmarks can be found herein than would be feasible for a physical book.

Mister J Gray deserves my heartfelt congratulations for his triumphant transcription of this heretofore unreleased account from the fabulous fiction called “Castle Falkenstein.” The adventure takes degrees of success and the importance of class, race, etc. well into account and presents a thoroughly compelling mystery that most assuredly is worthy of one or multiple encores. It is my utmost pleasure to be in the fortunate position to announce that the understanding of the period and the special considerations the presence of the Faerie have had on the world, should be considered more than adequate; indeed, I consider them worthy of heartfelt praise.

It is hence my honor and privilege to award this distinguished and entertaining murder mystery the honors of 5 stars as well as the seal of approval for extraordinary merits. A round of applause, mesdames et messieurs!

You can get this thoroughly entertaining investigation here on OBS!