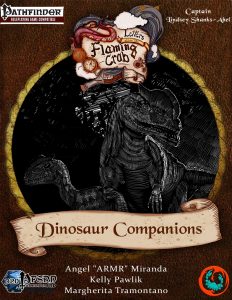 This installment of the Letters from the Flaming Crab-series clocks in at 23 pages, 1 page front cover, 1 page editorial, 2.5 pages of SRD, leaving us with 18.5 pages of content, so let’s take a look!

We begin this pdf, as always in the series, with the reproduced letter from the planes-hopping vessel UCS Flaming Crab, which has obviously landed, at least for now, in a dinosaur-filled world! More than that, however, the pdf begins with a really handy index that dinosaur aficionados will very much adore: A massive table that lists the dinosaurs released for PFRPG in alphabetical order, with CR, size, environment, whether they make animal companion or familiars…and the ERA! If you’re conscious of internal consistency, that is the extra mile and I love that the pdf included this. Oh, and guess what: The table’s hyperlinked for your convenience. Yeah, really, really nice.

So, we’re off to a good start. The pdf itself can roughly be compartmentalized in two sections after that: Section 1 depicts dinosaurs that would act as potential animal companions, ranged from the humble CR 1 scipionyx, the CR 2 tupandactylus, the CR 3 stygimoloch and neptunidracos all the way up to the CR 15 argentinosaurus. The CR 6 Baryonyx, Tethyshadros and Maiasaura, CR 8 Concavenator and Deinocheirus, CR 5 Corythosaurus and dilophosaurus as well as the CR 4 dracorex and the CR 13 utharaptor can be found here alongside the CR 7 excalibosaurus. All of these dinosaur companions not only come with proper monster statblocks, they also have companion statblocks included for your convenience.

Nice: Most receive their own artworks. From a mechanic point of view, the dinosaur companions are generally situated along the higher echelons of animal companion power and feature the respective dinosaur companion’s unique tricks. I don’t have serious trepidations regarding the power level of the options contained herein…so yeah, nice array! You will also probably notice that these dinosaurs make use of lesser known species, which constitutes a serious plus. I have not seen stats for these dinos in any iteration of d20, so big plus here as well!

The second part of the pdf covers the dinosaurs that are suitable as familiars. As such, the bonuses they convey are collected in a handy table for you. A total of 10 of these fellows are included, ranging from CR 1/4 to CR 1. These once again represent nice options and, in case you’re wondering, the dinosaurs covered here are coelophysis, jinfengopteryx, leaellynasaura, mei, micropachycephalosaurus, microraptor, parvicursor, scansoriopteryx, nyctosaurus and sordes. Speaking of the latter: The pdf actually offers more here and features a cool CR 5 sordes-swarm! Tiny swarm of dinosaurs chewing folks to pieces? Heck yes.

The pdf also has another section, aptly titled prehistoric encounters. These represent encounter-sketches: 4 of these are for CR 6, one for CR 4 and one CR 1, providing some nice set-ups that include mating season, the corythosaurus’ soundshock…or that they have to deal with dinosaurs while scaling a cliff.

Editing and formatting are very good, I noticed no serious glitches. Layout adheres to the 2-column full-color standard of the series and the artworks chosen for the respective dinosaurs are nice. The pdf comes fully bookmarked for your convenience.

Angel “ARMR” Miranda, Kelly Pawlik and Margherita Tramontano deliver a nice, fun installment here: The dinosaurs generally tend to adhere to one generally consistent power-level and there are some seriously nice tricks here: The special abilities always retain the basic sense of plausibility that I expect from animals and dinosaurs in RPGs. So yes, this is a nice installment in the series and a definite must-have for anyone looking for a Lost World-type supplement: The table alone may warrant the fair asking price for some of you out there. This is, as a whole, a well-crafted supplement and certainly justifies receiving a final verdict of 5 stars. Well done!