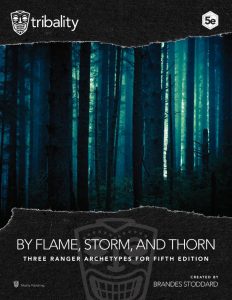 This little expansion-pdf for the ranger class clocks in at 8 pages, 1 page front cover, 1 page SRD, leaving us with 6 pages of content, so let’s take a look!

After a brief page of introduction to the matter at hand, we get a total of 3 different ranger archetypes, the first of which would be the Lantern-bearer. At 3rd level, these guys get a weaponized brass lantern, which inflicts 1d4 bludgeoning damage and acts as a finesse weapon. As a purely cosmetic gripe, while by now finesse weapons are unanimously 1-handed, for future-proofing purposes I would have specified that. The lantern-bearer may expend ranger spell slots to inflict bonus fire damage when attacking, starting at 2d6 for a 1st level spell, +1d6 for every spell slot beyond that, to a maximum of 5d6. The fire inflicts +1d6 damage versus beasts, monstrosities or undead. Additionally, the character can place the lantern on the ground or put it on a hook and expend spell slots to enhance the healing capabilities of those resting within its glow, grant resistance to necrotic and cold damage and advantage on saves versus the frightened and charmed condition. And no, the two abilities do not allow for cheesing.

At 7th level, the archetype gains Shadowed Paths, which can be used only once per rest-interval – two benefits can be chosen: Dispelling obscuring effects of targets hit or bonus action teleport to the lantern’s bright light radius’ edge while in an obscured area both make for cool effects. 11th level increases base damage of the lantern to 1d8 for both fire and mundane damage. Additionally, creatures of aforementioned types now take damage while within the glow of a placed lantern. 15th level lets allies with channel divinity or healing spells ignore the range limitations of the healing effects while within the placed lantern’s light and yes, it does take care of AoE-healing as well. Okay, I’ll admit it – as a Ravenloft/Dark Souls/Darkest Dungeon/etc.-fanboy, this had me pretty soon. I love this archetype.

Archetype number 2 would be the stormcloak and at 3rd level, this one has a similar ability like the lantern-bearer – spell-slot expenditure for bonus damage, this time around your choice of either lightning or thunder damage. 7th level provides resistance to both lightning and thunder and when you suffer either damage type, you may use your reaction to absorb part of the damage for 1 round, adding +2d6 damage of the type absorbed to damage; +1d6 if used in conjunction with aforementioned spell-slot expenditure ability. 11th level is a bit weird – when you inflict damage with two weapons in a single round, you add +3d6 thunder damage to one target damaged. 15th level increases the potency of the weapon-imbuing trick, adding 10 temporary hit points (or those suffered, whichever is less) that last for 1 minute. While these persist, you may spend the bonus action to fly up to your speed, but you do fall if you don’t end the movement on solid ground.

The third archetype herein would be the Thornguard, who begins third level with snare mastery, which allows you to create a deployable trap during a long rest (only one may be in effect at a given time) – these can inflict the blinded, poisoned, pushed, restrained, stunned conditions and may be deployed as a bonus action. The Wisdom (Perception)-DC to notice it is equal to your save DC, and conversely, said DC is what’s required to disable it via thieves’ tools. Traps can be sprung as a reaction to an enemy standing in them and deal a basic 2d6 piercing damage, with spell-slot expenditure being possible to increase the damage inflicted. Interesting: Thus magically laced traps can inflict other damage types (lightning, poison, thunder) and disarming not triggered traps is covered as well.

7th level increases the area of effect your snares affect, though the magic enhancements aren’t as potent here and, oddly, RAW, does not allow for a similar damage type choosing; the bonus damage is not perfectly codified this time around. The ability also nets your resistance versus damage incurred by traps or glyphs of warding. 11th level rewards dealing damage to one foe per round twice in a single turn, moving hostile creatures and imposing disadvantage on saves versus traps on the target. The base damage of the traps is also increased. 15th level lets you store a second snare when completing a long rest and allows you to reassemble them after 1 minute after combat. This may be a bit late – snares being the unique selling point here, I do think that at least the +1 snare being moved down to 7th level may be sensible.

Editing and formatting are very good, though the italicized sections of sub-feature lists are, formatting-wise, not smart. While we have no spell-formatting confusion this time around, as a whole, that could happen. Still, no issue. Layout adheres to Tribality’s nice 2-column full-color standard, with fitting full-color photography as artwork. The pdf has no bookmarks, but at this low length, I can live with that.

Brandes Stoddard’s ranger archetypes are generally solid – with one very minor hiccup, the rules-language remains precise and we get one damn amazing archetype with the lantern-bearer. The other archetypes fall slightly short of that one’s awesomeness, but as a whole, they’re not bad either and make for nice options. The stormcloak would have benefited from an ability that is more than a more flexible tweak of a part of the lantern-mechanic, but that’s just me being a spoiled SOB. As a whole, this is worth the fair asking price. My final verdict will clock in at 4.5 stars, rounded up by a margin due to in dubio pro reo.