Scourge of the Tikbalang (NGR/OSR)

Scourge of the Tikbalang (NGR/OSR) 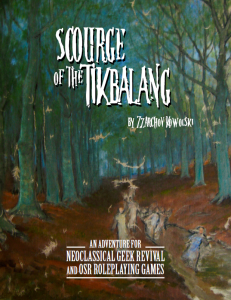 This module clocks in at 12 pages, 1 page front cover, 1 page editorial, leaving us with 10 pages of content, so let’s take a look!

Now, this module is made with two systems in mind – Zzarchov Kowolski’s NGR (Neoclassical Geek Revival) and OSR-gaming. Which system? Well, none. Like in the other self-published modules the author has written, we get very minimalistic OSR-stats: Class and level, if any, are noted. AC is given with the armor equivalent à la “AC: As leather and shield (high Dexterity)”, and attacks are similarly noted, though sample values are provided. The Stats also come with hit points.

NGR, a criminally underrated system in my book, gets somewhat more detailed stats, so if you have the luxury of choice, I’d suggest the latter. Still, fleshing out the OSR-stats is no big deal and won’t take long.

Anyways, I should note that you can run this, at least potentially, as is. Why? You can actually solve the module without shedding a single drop of blood, without rolling a single attack roll. I’d suggest around 1st to 3rd level regarding level range. The module has no maps, but needs none.

In spite of the option to solve it sans violence, “Scourge of Tikbalang” represents one of the darkest modules I have ever read, and the author has provided a trigger-warning in the beginning – AND urges GMs to really think about it. I applaud this. And the module actually doesn’t achieve its gravity and impact with gore.

This module takes place in a quasi-Phillipine village, with a very subdued potential note for a colonialist angle, but reskinning to e.g. Europe during the time of witch-trials or Loudon-ish contexts is pretty simple. You just need an equivalent for the Tikbalang.

And this is pretty much as far as I can go without diving into SPOILERS. Potential players should jump ahead to the conclusion.

In case you’re not familiar with the Tikbalang: It’s an ogre-ish trickster-spirit with a horse-skull head (nice b/w-artwork included!) that has hooves, is somewhat malignantly mischievous…and it ostensibly rapes virgins to produce more of its ilk. Yes, folklore can be messed up.

This is the issue the PCs have to solve: In a backwater village of motley napa huts, under the auspice of a greedy, old elder, the PCs hear a tale of woe, as Dakila Magbanua’s wife, the beautiful Mayumi, has been raped by the tikbalang. Dakila, the leader of the local militia, was first at the scene. Mayumi has since started showing that she’s pregnant – a horrible fate awaits her, for if the tikbalang is not slain, she will give birth to such a monstrosity….a fate that the backwater village culture is poised to prevent in the obvious manner. Worse, Mayumi has not been the only victim: Since then, Kiko Tala, a frumpy teenager, has also fallen prey to the tikbalang’s predations. One Magtanggol Palad, an accomplished pig hunter, confirms the presence of the monster, and nonagenarian Malaya Laksina has seen the horrid thing over the village…it seems like the PCs have their work cut out for them. Find the monster and slay it!

Except, that’s not the case. The cake is a lie, the tikbalang doesn’t exist. The old woman is senile. Kiko is, pardon my French, an attention-whore who doesn’t grasp how sex works yet. Dakila, if pressed, mentions that Mayumi did not exactly scream like she was having a bad time. Married to Dakila against her will, she actually never was raped. She made that stuff up, and the rest is a mixture of hysteria and deliberate deception. You see, her lover is one Makisig Palad, a scoundrel who has gone into hiding. He could have had his pick…but he had to go for the militia leader’s wife. Now, his brother Magtanggol is perpetuating the lie Mayumi blurted out when Dakila almost caught her and Makisig in flagranti.

The rest is a case study on how misguided faith and morals can wreck people…but what do the PCs do once they find Makisig? Do they perpetuate the lie? Do they unearth the truth? Both will have severe and unpleasant consequences. Makisig does have a plan: If the PCs just manage to steal the one horse from the pirates occupying the neighboring village, they can slay the tikbalang, right? It should be noted that this will NOT have nice consequences for the neighboring village.

There is no easy way to solve this, just an appalling situation with consequences that will not be pleasant for those involved. Then again, considering the story-line, I am not exactly brimming with compassion for the atrocious behaviors exhibited by the NPCs…and that is clever and intentional.

As an aside, the last page does mention an oddly out of place monolith as well as several pretty cool further adventuring hooks.

Editing and formatting are top-notch, I noticed no glitches of hiccups. Layout adheres to a professional, neat two-column b/w-standard with multiple pieces of original b/w-artworks. The pdf has no bookmarks, but doesn’t need any at this length. Same goes for a map.

Zzarchov Kowolski is always trying to push the envelope in some ways, but there is more here than shock value – this is not dark due to gore, difficulty and the like. Instead, it is very much a perfect example for the concept of the banality of evil. All characters within are despicable in some way – but in a very nuanced and human way. There is no ill intent underlying the actions, just humane fear.

The moral conundrum posed here is truly that – and it is handled in a mature and tasteful manner.

All that in just 10 pages. If you’re looking for something different, and if your group can handle the dark subject matter, then this represents an inspired little adventure. My final verdict will clock in at 5 stars + seal of approval.

Zzarchov Kowolski’s modules are notoriously hard to get in print. If you enjoy his style, you may want to check out the kickstarter currently running for NGR – it’s the only place where you’ll be able to get this in print as part of a massive compilations! (Alongside different NGR-versions illustrated by different artists, as well as a new adventure…) You can find the kickstarter here!