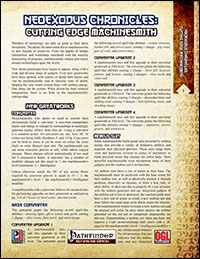 This supplemental pdf for the Machinesmith-class is 9 pages long, 1 page editorial/SRD, 1/2 a page advertisement, leaving us with 7 1/2 pages of content, so let’s take a look at this!

This pdf kicks off with two new types of greatworks, the first being the converter, which fluff-wise converts latent energy into effects that duplicate a limited array of spell-like abilities. Converters get 1 +1/2 class level + Intelligence charges – at least that’s what the pdf specifies. Which makes me doubt whether this  is correct –  usually, we’d be looking at an addition of the intelligence MODIFIER – adding the whole stat is something completely different and hopefully just a glitch. From at will powers that don’t use charges to those taking up 3 at the fourth and final greatwork update, the converter allows for access to spell-like abilities running the gamut from dancing lights at will to implosion for 3 charges. What’s rather odd is that implosion takes up as much charges as telekinesis and reverse gravity, two power-wise rather inferior spells. Also, getting telekinesis at 20th level is too late. On a nitpicky side, the spell discordant blast has not been italicized in the pdf. I don’t know, the curve at which the powers become available feels a bit off.

The Converter also gets 4 new augmentations that allow converters to assimilate limited amounts of energy, increase DCs by 1 and may, as the coolest of the abilities, shape one 10 ft. cube per two levels, allowing for really cool ways of modifying non-instantaneous energy effects – walking literally through forest fires, for example or creating holes in roaring blizzards conjured by hostile forces. The final one allows that at 12th level even as an immediate action for double charges.

The second Greatwork would be the Mobius Suit, which is obviously inspired by one particular Mr. Tony Stark – based on an armor, the suit grants armor-bonus and can use its charges (of which it gets 1/2 class level + int modifier) to gain either DR 1/- or energy resistance 5 to one chosen energy for int-mod rounds – essentially, the suit has charge-powered abilities that become progressively more versatile. More’s the pity that the basic ability of the suit fails to specify whether it can be used multiple times at once – could e.g. a machinesmith grant him/herself 5 resistance to fire for 4 rounds and on the next round also get 5 resistance to cold for a second expended charge or can only one effect be in place at once? This becomes especially relevant on the first upgrade, which suddenly nets DR 2/- and energy resistance 10. Does the Machinesmith still have to specify which type of energy? I assume so, but the wording is ambiguous. The suit also grants proficiencies with armors and up to 4 integrated gadget-slots as well as the option to retain its AC versus firearms, increase AC versus crit-confirmation rolls and use swift actions to temporarily gain access to evasion for a ref-save.

The Mobius Suit also gets 4 new augmentations, which allow for enhanced  str-and dex-based skill checks, lift as if under the ant haul spell (which the pdf fails to italicize), supercharge the suit for a massive +6 bonus to Str and Dex at the cost of 1 hour of not working (cool) and use charges to extend the duration of integrated gadgets.

After that, we’re off to 14 new gadgets. We get one to launch snapdragon fireworks over multiple rounds (again, lacking italicization), create temporary Resilient Spheres, Defensive Shocks, temporarily suppressing machinesmith  gadgets and dazing constructs (sans save), add firearms to turrets and create a power gauntlet-like device -at least in theory. EDIT: I botched. Impact Knuckles do specify what they’re supposed to do, though the entry lacks italicization of the spell effect they duplicate

He may also duplicate the Polypurpose Panacea-spell via an injector, create proximity mines that duplicate blast glyphs and shout non-lethal restraining cables at opponents, enhance the invisibility cloak to follow up with displacement (Imho a great idea!), duplicate excavations via sonic diggers, the battlemind link-spell via tactical communicators (though construction options to widen the network from two presumed participants would have been nice), get a beacon that makes hitting illuminated foes via turrets faster and more reliable (nice!) or suspend him/herself in temporal stasis.

We also get 4 new tricks (though the header faultily calls them techniques): Caustic Refuter stuns those affected by Axiom or counter-science, Drone Expert improves all created constructs (including the pocket army), increase your to-hit prowess with your tools and recycle prototypes (i.e. his/her spells): Upon using a prototype, the machinesmith may for one round change one of his prepared prototypes of the same or higher level into the one he just used.

Next up are two archetypes: The Gadgeteer, who sacrifices his/her greatwork for more spells and a focus on being faster at creating magic items and commanding/enhancing drones. The second one, the Wonderbuilder, does essentially the exact opposite, sacrificing part of his prototype spells for a secondary greatwork (and later even a third one), but at the cost of never having his primary greatwork reach upgrade 4.

The pdf also provides us with 6 prototypes to revisit the topic of drones, which had been scrapped from the original class-pdf. Two of the prototypes allows you to grant limited mobility to your turrets or grant them climb speeds respectively, while the other 4 create small assisting drones – at level one drones sans combat capabilities, at 3rd level conjure up swarms of nauseating drones, create at 4th level spying drones to track foes and provide visual feedback and at 5th level finally create deadly extermination drones with melee and ranged attacks. My only gripe with this one being that it does not specify what action a reload of the ranged weapon is and how much ammo the drone gets. Other than that, the concept of drones has been quite adeptly been salvaged.

Editing and formatting are not that great – apart from nitpicky issues like non-italicized spells, the pdf also suffers from a missing sentence in one of its gadgets. All in all, this feels like it could have used another pass at editing in order to properly unleash its potential. Layout adheres to LPJr Design’s beautiful two-column standard for NeoExodus and we also get an additional version that is slightly more printer-friendly. The pdf features a beautiful new piece of full color artwork and is fully bookmarked for your convenience – nice! The pdf also comes with spell-deck cards of all the new prototypes – very nice if you use them, especially for the very fair price!

I love the Machinesmith-class to death – it has seen some justified support by Super Genius Games and Rite Publishing and deservedly so – the class rocks hard and is a great treat to play. Unfortunately, much like the first iteration of the class it’s based on, this expansion by Wendall Roy suffers from several issues – nothing too significant, but quite enough to drag down the actually REALLY cool, glorious concepts. Without glitches, I’d gladly give this 5 stars – but as provided (and I didn’t mention every glitch), I can’t for the life of me, rate this higher than 2.5 stars, rounded up to 3. I’m hoping for a revision I can rate higher and truly recommend.