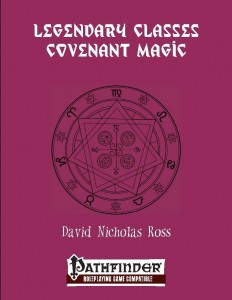 Without any introduction or wasted space, we are introduced to the new Medium base-class that gets d8, 4+Int skills, 3/4 BAB-progression, good will-saves, proficiency with light armor and simple weapons, as well as spell-like abilities of up to 6th level – and you’d be outrageously gasping by now since they cannot be counterspelled – but: A rather interesting balancing method is being used –  a medium can only maintain one spell-like abilities at once, with a new ability immediately ending the first. These abilities also get aligned later and count as spell for item activation purposes starting level 2. The spell-like abilities can be each used 3/day and their governing spellcasting attribute is charisma. At first level, the medium also chooses an influence – but more on that later.

Mediums gain spirit guides that may use guidance on their behalf whenever s/he enters a trance and detect spirits, which include undead, fey, invisible, outsiders and also use this ability to notice and analyze haunts and even keep them from attacking – which is great since they are mostly untapped  regarding class abilities. Starting at 3rd level, the medium also gets perhaps one of the most complex and well-executed abilities I’ve seen in quite a while – Séance. Mediums may call spirits and souls of creatures into their bodies to tap their knowledge and  bargain with them planar ally style – including a max HD-table per level.

Now Influences, as I’ve mentioned before, are important: Mediums may choose from 11 influences that include diabolical forces, angelic hosts, restless souls, elemental forces or seelie and unseelie courts. Each Influence nets the medium a bonus language, a selection of trance covenants and spell like-abilities and a different capstone ability (yes, one for every influence) and also recommended, but not prescribed spirit boons.

I need to address Trances. Mediums may enter  a trance that lasts 4+Cha-mod rounds +2 per medium level after the first. While in trance, mediums get +4 to Con and Cha as well as access to the covenants and spell-like abilities associated with her/his influence and may use his/her spell-like abilities associated with influences once per trance without counting against the daily maximum. Essentially, the trance can be considered a caster’s equivalent of a barbarian’s rage (and no, they are not compatible) and trances do have some restrictions to maintain balance.

Now have I mentioned spirit boons? At 1 st level, 3rd level and every 4 levels after that, the medium may choose a spoken invocation to gain the benefits of one of (unless I miscounted) 44 (!!!) spirit boons, which include things you’d expect like reading minds and telekinesis and implanting geas, absorb wounds of others via stigmata, add essentially add what amounts to metamagic-like, yet thoroughly unique effects to your spell-like abilities, which include ignoring the miss chances of incorporeal adversaries, prolong them etc. Have I mentioned the option to put psychic shackles on spirits and chain them in your mind, turn incorporeal, possess foes (also only limbs – quite cool!), heal ability damage and raise the dead? Yes – the options are varied and damn cool.

A new spell lets you expel spirits and then, we’re off to the topic of covenants – Depending on the strength of the spirit called, a covenant requires the expenditure of money, with access being also predicated on a tree of 5 progressively more expensive feats – though advice for alternate progressions are given as well if you’re not sold on the approach. Finding covenants is not only an opportunity for spending character resources, but also for roleplaying and entering covenant examples are provided alongside comprehensive lists of covenants by strength. Covenants are depicted somewhat akin to feats – the power-level of the covenant being included in brackets behind the name, followed by a short fluff description and then the benefits as well as a comprehensive list of patrons that can grant the respective covenant. Dark Arcanas, Archon Wards, the option to temporarily rip someone from death’s grip, turn into elemental body II, gaining living illusions as companions, tap into your patron’s abilities, manifest blades from the very heavens, immunity to ageing, mitigating dazing and stunning down to  being staggered, gain a gaze attack that detects thoughts and may stun those that meet your gaze, cast foes down to the very hells – all these are just the tip of the ice-berg.

The pdf also features advice on creating new covenants as well as guidelines for non-monetary tasks for entering covenants.

Editing and formatting are top-notch, I didn’t notice any significant glitches. Layout adheres to PDG’s printer-friendly 2-column standard and the interior artwork is far beyond what the humble cover would make you believe – we neat full-page full-color artworks, multiple of them, and I have seen none of them in other publications before. The pdf is fully bookmarked with nested bookmarks for your convenience, making navigation easy.

Damn. I’m stupefied. Seriously, honestly stupefied. This class and its material rank for me as one of the most complex examples I’ve seen so far and it takes a bit of effort to properly get this material and appreciate it. And then, slowly, the potential, the vast friggin’ potential of this class and its covenants sink in. Harry Dresden-style deals with fey? Check. Haunted by visions of hell? Check. Scions of the Heavens? Check. Champions of the elemental forces? Ditto. We essentially get a feat-style-ability-suite-style-class COMBINED with unique spellcasting COMBINED with talent-based abilities COMBINED with domain/bloodline-like abilities COMBINED with modes à la rage. And all elements interconnect. Yes, you could just extract the covenants for any class. But oh boy would you miss out.

This may be no class for beginners, but it is G-L-O-R-I-O-U-S. Complex, mechanically innovative, customizable. Oh boy. It’s been AGES since I’ve been this excited about a class and it marries author David Nicholas Ross’ mastery of crunch with great production values and we get perhaps one of the best classes, perhaps even the best I’ve read so far for PFRPG. Yes. That good. Do me a favor, do yourself a favor – get this. The class and covenant magic is so modular, it practically screams to have its already impressive array of abilities further expanded. Even if you’re only remotely interested in good crunch, get this. If you want a class with complex customization options that marries these with massive roleplaying potential, get this.

This is worth every cent thrice. At least. This is the new gold-standard for class-design against which all other classes will be judged.

My final verdict would be 6 stars, if I only could – hence, 5 stars + seal of approval and a high chance that this will feature on my Top Ten of 2013-list.

Get this awesome class here on OBS and here on d20pfsrd.com!