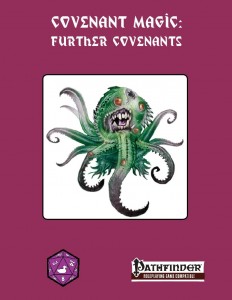 The second expansion to Purple Duck Games’ great system of covenant magic clocks in at 17 pages, 1 page front cover, 1 page editorial, 2 pages of SRD, leaving us with 13 pages of content, so let’s take a look, shall we?

We begin this pdf with a handy page of FAQ regarding some of the more peculiar questions of covenant magic that did not arise from issues, mind you, but rather from the system’s admitted complexity. With a concise definition of occult spirits, the pdf does provide a nice list.

I do assume familiarity with covenant magic for this review, so in case you need an explanation of the concepts, I’ll refer to my reviews of the original covenant magic pdf and its expansion.

We begin with a total of 6 new influences for mediums to choose from, with Dark Hedonism constituting the first and providing future-proof support for the Monsters of Porphyra II patreon project, though remaining perfectly functional without that – the focus here, obviously, lies on trickery and enchantment. The more benevolent Elysian Blessings influence provides a surprisingly diverse array of trance SPs that center around the theme of freedom, with covenants allowing for resilience and a focus on themes identified for azata.

Faith Slayers can be considered not only atheists – they are the true foes of the divine, engaging in pretty despicable acts with a theme of self-buffing and a latent Übermensch-style ideology suffusing the spell-like ability and covenant choices. I do consider this one slightly problematic in that it is codified straight as evil, with the capstone making this abundantly clear – while I realize that fanaticism never creates a helpful breeding ground, I have seen my fair share of religiously motivated hypocrisy and issues in real life – when taking this up to the n-th degree, one can easily construct cases in which direct and violent opposition towards deities in a magical setting does not need to be evil – imho, we have a lost chance for a shades of gray duality here, instead opting towards the general concepts espoused by the asura.

The Kyton Enlightenment on the other hand is more versatile than the oftentimes reductive depiction of kytons in mainstream PFRPG. Why? Because BDSM in most mainstream media, including PFRPG is codified as evil, as something to revile, as something inherently sinister – and I *get* why. That being said, I have always considered this to be a pretty much massive flaw, an undue reduction of a variety of compelling concepts – the self-flogging martyr achieving spiritual ecstasy through pain, the yogi – one can field ample examples wherein the concept of enlightenment through pain need not be connoted with evil and thankfully, the kyton enlightenment influence, while retaining the somewhat sinister theme of kytons is not coded as evil – nice!

Guardians of the fallen can elect to choose the new Sacred Duty enlightenment, associated thematically with psychopomps and thus can be pictured as slayers of undead, with a hex-like cap on the otherwise extremely powerful harm-only heal Spell-like ability. But all of these pale in awesomeness when compared to the qlippothic redeemer: Know how most qlippoths try to end all life yaddayaddayadda? Well, these guys are more constructive! The souls of chaotic evil beings flood the abyss and generate demons, right? So how can the qlippoths stem the tide, hope to regain their supremacy? Well, what about converting those pesky psychos and leading them on a path of redemption? I.e. doing the right thing for the most wrong reason possible? This enlightenment is GLORIOUS -related to an evil outsider race, it is predisposed to work well for good and neutral characters, mirroring in SP and trance covenant selection a theme of redemption and kindness. The roleplaying potential of these guys is VAST and the great full color artwork of one of them is ncie to see as well.

The Technophobe archetype is great for everyone using the Technology Guide, poaching in remove radioactivity and similar tricks – essentially, these guys can be considered the anti-technology mediums – solid!

We also get a diverse array of new covenants, ranging from least to superior – from magical khopeshs to strikes that temporarily neuter the ability to cast divine magic (with a hex-like 1/ 24 hours-balancing caveat), grant yourself regeneration (with means to offset it) or a stun-inducing gaze attack that also helps you take down those pesky demons. All in all, the respective places in which they’re gained make sense, with superior covenants providing massive benefits, with least covenants provide nice imagery and solid low level options.

The pdf also provides statblocks – a medium 4/ranger 1, an animist druid, a tiefling, dwarf and green hag medium, even a tengu and a high-level CR 17 foe. The pdf closes with 3 minor pieces of errata for its predecessor file – which imho should have been updated in that file instead of featured in this pdf.

Editing and formatting are very good, I noticed no significant issues. layout adheres to PDG’s printer-friendly 2-column standard with a nice page of full-color artwork featured as well. The pdf comes fully bookmarked for your convenience.

Julian Neale is one of the designers that deserves more attention than he gets – his designs tend to be not too flashy, that is true. But they have a very humble elegance in many instances and this is no different. Oh well, wait, it is – actually, here, Julian has went all out – the concepts as presented herein began pretty solid, if unremarkable and then, BAM, the qlippothic redeemer. This influence alone is worth the asking price for the vast myriad of narratives one can weave from the theme – I can literally sketch a whole campaign based on the concept introduced herein. Yes, this is awesome. The solid technology-related archetype is a nice bonus and the covenants provided are diverse as well. While I am not a fan of all design-decisions herein, with especially the amount of apotheosis-capstones boring me at this point, this does boil down to personal preference more than any true and valid gripe I could field against this pdf. In the end, this is an inspired expansion and well worth a final verdict of 5 stars + seal of approval.

You can get this great expansion here on OBS and here on d20pfsrd.com’s shop!
Endzeitgeist out.