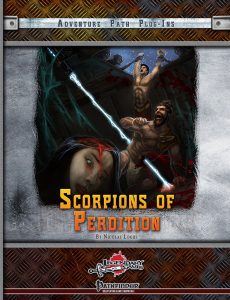 This module clocks in at 40 pages, 1 page front cover, 1 page editorial, 2 pages of introduction/how to use, 1 page ToC, 1 page SRD, 2 pages of advertisement, 1 page back cover, leaving us with 31 pages of content, so let’s take a look!

This module is intended for 8th and 9th level characters and can be easily inserted into Iron Gods, obviously…

…and that is pretty much as far as I can go without going into SPOILERS. Potential players should jump ahead to the conclusion.

All right, only GMs left? Great! The Drifter has wandered the ominously named region of “The Dust” for as long as anyone can remember, hunting a similarly long-lived outlaw named Shadrax. The drifter was once in charge of a prison ship that crashed on Golarion – and he is basically android Clint Eastwood with a laser gun. He has spent hundreds of years hunting down the escaped convicts, but Shadrax, the engineer of the riot that caused the ship to crash, has evaded him. Since then, his programming has changed and he considers himself the law in the region of “The Dust”, hunting down evildoers and seeking his nemesis. Shadrax, meanwhile, is as nasty as it gets: Infused with nanites, the xill has time galore and as such, has tried breeding out the nanites that keep it confined to the material plane over generations, but to no avail; worse, her little slave empire has fallen, the dread xill buried in a stasis pod…and now, hundreds of years later, the Drifter’s fuel starts running out. When the PCs, by one of the angles, come to the region and hopefully help him taking care of some harpies, he already shows signs of decreasing efficiency.

The dialog with the drifter does feature some read-aloud text (nice!) and the drifter tries to recruit the PCs to help him acquire a means of charging him – he knows where the object is, but needs help getting it. Oh, and if you’re wondering: Shadrax’ spawn do get modified abilities noted in a sidebar. Arriving at Perdition (fully statted, fyi), the overseer Perdy is facing down a mob of people who want to leave; as its name points out, Perdition has seen better days…and thus, the PCs are off into the mine to deal with the issues of the town…only that this is easier said than done. You see, there is a so-called mud-spawn of shadrax stalking the mine and it is a delightfully sadistic critter with paralysis and earth glide, a perfect adversary to generate paranoia, fear and an atmosphere of frickin’ HORROR. Oh, and it is glorious – you see the mud-spawn pretty much is a puzzle boss that you *can* try fighting fairly, but a massive 1-page guideline of running the critter should make sure that that doesn’t happen – instead, exploring the complex and paying attention as well as clever problem solutions will be required by the PCs to defeat this adversary. And yes, there are other critters in the dungeon as well…so yeah… in the best of ways, the module rewards smart actions here.

Making their way through the mine, the PCs find a location both wondrous and frightening, a massive necropolis with a palace and an irradiated river, all under the ground and lavishly illustrated with a one-page artwork that doubles as a cool handouts. The map provided here, just fyi, is player-friendly and in the place, Shadrax awaits with its priests – the progenitor is deadly indeed: A xill gunslinger (depicted with a cigar in one of the 4 hands!) makes for a truly deadly adversary.

The second part of the module deals with the so-called “Temple of the Burning God”, aka the wreckage of the ship…part of which hangs over a cliff, vertically, only attached to the remainder by a catwalk. Yep, vertical dungeon exploration. Yes, the adversaries obviously make good use of this uncommon environment. Yep, the dungeon is amazing and one of the few places where paltry CR 2 adversaries will really make the PCs sweat. As a minor complaint, the maps of the ship and the aforementioned palace do not come with player-friendly, key-less versions, so if you’re like me, that may be slightly annoying.

Editing and formatting are top-notch, I noticed no significant hiccups. Layout adheres to legendary Games’ neat 2-column full-color standard for Iron Gods-plug-ins and the pdf sports a mix of previously used full-color artworks and amazing new pieces. The pdf comes fully bookmarked for your convenience and the cartography in full color is nice, though the lack of player-friendly maps for some of the adventuring locales does constitute a downside in my book.

Alex Riggs and Nicholas Logue deliver a wonderful lovesong to Clint Eastwood’s legendary “High Plains Drifter” – I adore the dirty, grimy Westerns and, seen through the lens of science-fantasy, with ample horror spliced in, Scorpions of Perdition can be considered to be one amazing module indeed, with the Drifter making for a potentially glorious ally for the PCs. The flavor of each and every location is unique and internally consistent; the locations themselves sport details galore and represent unconventional, intriguing challenges for the PCs. In short, this module does everything right apart from the lack of player-friendly maps. That being said, this should NOT keep you from getting this inspired, amazing module – it ranks as one of the best Legendary Games modules released so far. It should also be noted that, much like the excellent Starfall, this module very much works perfectly on its own – in fact, I’d encourage getting it for a taste of the unusual in just about any context.